Fairphone 2 update to android 9 didn't work - why is doing a manual update such a 'roulette'?

I have for a couple of years a Fairphone 2. I kept it on Android 7 for quite a while, but today I’ve decided to go for Android 9.
The automatic update failed (I want to keep this message short, so I won’t put the details here). So I had to do a manual update. It took a while to understand how to do this, and to get the connection between my windows computer the links in Fairphone 2 Android Update failed, phone broken now - #20 by Saphira were very helpful. Thanks!

But when I run the flash-for-windows.bat for version 21.12.0 I get the following error: 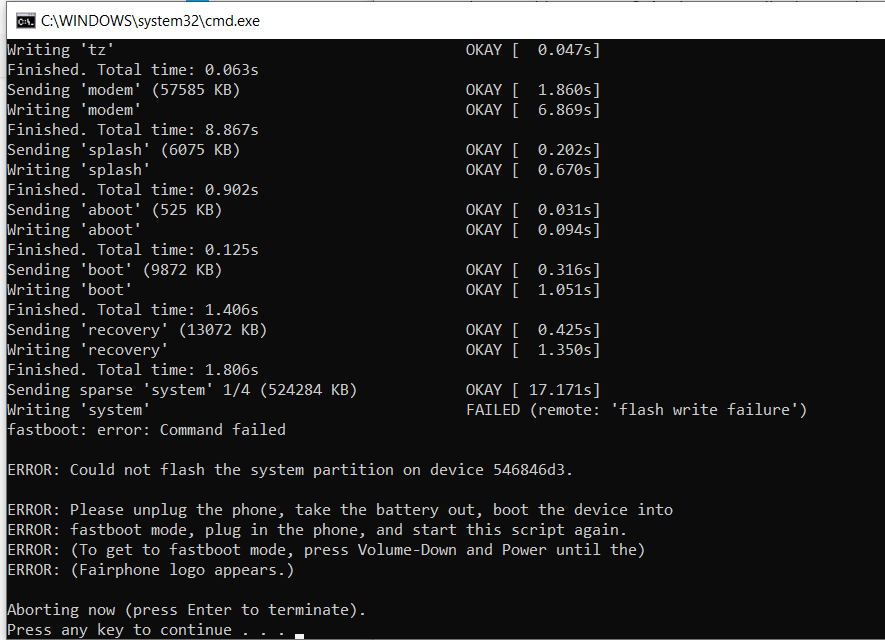 The error message says to try it all over again. I have done this, but I then keep getting the same error, but at different places during the update. I have already ran it for at least 20 times. I’ve only kept account where it crashed after a while. Score until now is that it:

And after each crash I have to remove the battery (to turn the FP2 off), remove the USB cable, restart the phone in fastboot, connect the USB cable and start over again.

So what do I know:

Why is this such a ‘roulette’? Is there a bad connection somewhere? I’ve tried cleaning up the connections in my FP2, but I don’t see any improvement.

I keep trying to flash the image, hoping that eventually it will reach the end. If it doesn’t work, what should I do?

I should have written this post earlier, because finally it seems that flashing did work. Took at least 25 tries, if not more. As written above I haven’t started counting in which file the flashing stopped only after a while. But the score after that were:

Is it my phone that flashing took so long? Or is there another reason?