I got an email to pre-order a “Fairphone 2 New Life phone”. So it’s a second-hand phone then.

Is it possible to get clear informaiton?

You are probably looking for official information, maybe @Douwe can help.

But my guess is, these phones ate simply refurbished phones: Returns from customers for various reasons that have been refurbished, repaired and checked for functionality and are now resold. Several manufacturers are doing this, including Apple. I also guess it’s impossible to know who owned a specific phone before and why would you want to. It’s also not common to tell which parts precisely have been repaired or replaced.

It is exactly as @ben says.

@Douwe how many new life phones are available?
How can we, FP2- ownesr, support FP1 owners?
Any ideas?
I think we should help them, so they don’t have to pay the full price.
:’(

Returns from customers for various reasons that have been refurbished

I would be interested in these “various reasons” and the approximate number of returned phones.

@douwe how many new life phones are available?

This fluctuates. As we sell new FP2’s there will always be people who use their right to return in the first two weeks. Phones from this so-called ‘cool-off’ period are then shipped back to the factory and checked and then put on the ‘refurbished phones’ stack. Every month we receive the stack here in Holland and we then allocate them to different groups: internally, partners, testers, clients etc. The demand in each of these groups also influences their allocations in the next round.

I would be interested in these “various reasons” and the approximate number of returned phones.

The reasons are very divers and not always known as people have the right to return anything they buy online to the producer within two weeks without giving a reason. I have no numbers of the amount of cool-offs, but I can check if someone of the support team knows.

Andrea, considering whether I can afford a new life fairphone to replace my still working, original battery, 3+ years old FP1.

do know alreay when the FP 2 New Life will be shiped?

I also was offered one of these as a warranty replacement, which I think is good. My only wish was a perfect display, as I really took care of mine (before the internal flash died - my guess). We’ll see… I’m waiting for a final notification that the phone is on the way.

Don’t worry!
I can’t imagine Fairphone to sell refurbished phones with anything else than a perfect display.
From the blogpost that @urs_lesse has linked:

In order to still get the most out of the valuable materials in these used phones, a selection of them goes back to the factory. There they are refurbished (damaged parts are replaced with new parts), tested again to ensure quality and restored to their original condition. These aren’t just “second hand” phones; they’re as good as new.

Plus: It’s not the first time, they are selling refurbished phones, as this thread (started july 2017) clearly shows.

And there were no complaints regarding those refurbished phones.

No, I got one for my mother, over a year ago. She is really happy with it. And as an unexpected bonus she got it with the upgraded camera modules. At that time the modules were just came out and the description tells it will come with the old modules.

The most recent supply of the Fairphone 2 New Life Edition has sold out.

It’s nice to read though that it will be back … “by mid-June”: 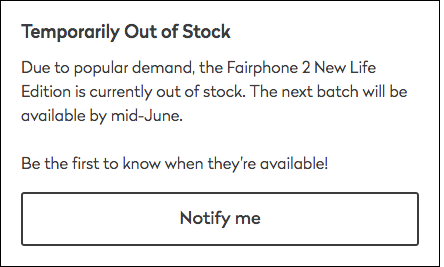 I suppose you highlighted tomorrow to make clear it will be on 11 June.

10 days on, the latest batch of Fairphone 2 New Life Edition phones is sold out. And this time, it sounds like now you need to wait until the next big thing.

Phones from this so-called ‘cool-off’ period are then shipped back to the factory and checked and then put on the ‘refurbished phones’ stack. Every month we receive the stack here in Holland

They are shipped back and forth to China? Isn’t that a bit crazy?

Transport makes up only 6.8% of the CO2 during FP2’s Lifecycle. 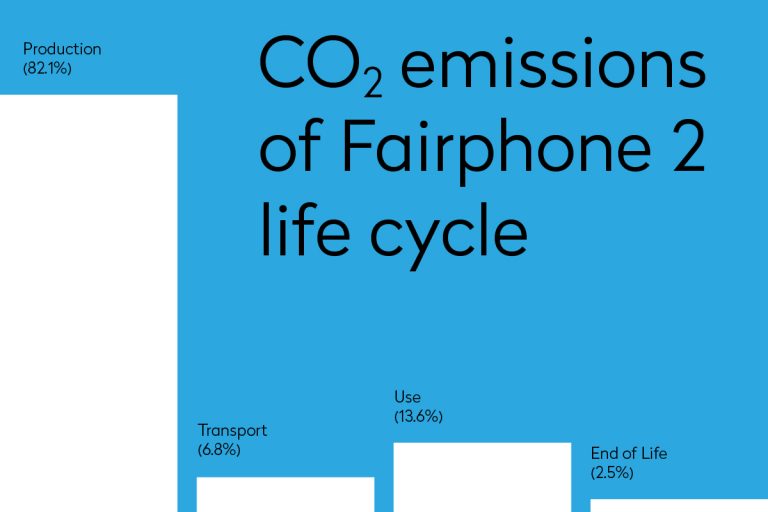 Source: How sustainable is the Fairphone 2

So it’s certainly more sustainable to ship the phones back and forth than producing new phones.

My guess is that they need to do the whole thing in the factory in China because they have all the testing facilities in place there.