After a Skype call with @Monica.Ciovica I updated the #EFCT18 Schedule Draft. It’s pretty full now already and I’m looking forward to the experiences.

So workshop day is already filled?
Or can other workshops from the list still be squeezed in?

What do you have in mind?

Well e.g. the Amstadam node of FairCoop agreed to hold a workshop a long time ago, but since I didn’t know which days are reserved for workshops I couldn’t make any further plans with them.
I’m guessing now it’s too late anyway.

Everyone, who wants to share a cheap group ticket on the train to Alkmaar on Tuesday, please send @AlbertJP, @Amber or me a PM with your given name, surname and birth date!

PS.: If you are already in the group PM, simply enter your details in

I have just ordered a battery in the outlet store. It appears Monica wants to have the orders in a few days, so I’d recommend the other EFCT participants to order quickly if you want to pick up parts.

I can’t change the Schedule - it says more than 10 users are mentioned - I can’t save.

@AlbertJP I think it was until Monday…

@Stefan, my battery has been ordered & invoice sent to me so apparently I was still on time.

@spaniel, I see in the top post that you have taken the spare bed in Chris’s room. Nice to see you’re joining. Can I add you to the group PM discussing the schedule?

yeah, that would be nice, thanks!

Austrian Fairphoners on the road … um… on rails. 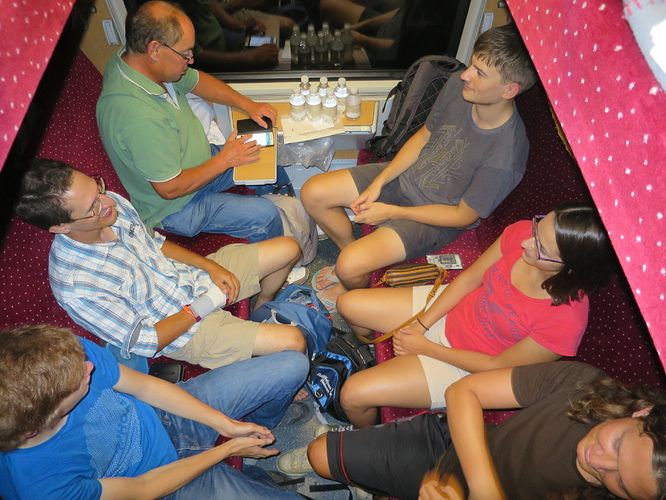 I hope you slept well in the night train

I did, when I took it three days before you, despite trouble with a drunk passenger in Nürnberg that night.

If you take the ICE on to Amsterdam, you’ll have a sort-of once in a lifetime event: it will be diverted over a freight railway between Arnhem and Utrecht because of the complete rebuilding of one of the stations in-between.

We had communication difficulties with a German passenger in our compartment. I think he was from the part of Germany where @Friek comes from.

This is what I’m thinking of…

"La Couchette" is the first episode of the second series of British dark comedy anthology Inside No. 9. Written by Steve Pemberton and Reece Shearsmith and directed by Guillem Morales, the episode is set in a sleeper carriage on a French train. English doctor Maxwell, who is traveling to an important job interview, climbs into bed. He is disturbed first by drunk, flatulent German Jorg, and then by English couple Kath and Les. Later, while the others sleep, Australian backpacker Shona brings p...

I’m on my 4th of 7 trains, each has been late and I’ve had to find new connections at each station.
But… I was asked about my phone!

If you take the ICE on to Amsterdam, you’ll have a sort-of once in a lifetime event: it will be diverted over a freight railway between Arnhem and Utrecht because of the complete rebuilding of one of the stations in-between.