So the screen of my phone just started flickering and then turned black… when I restart it flickers slightly but remains black. When this happened the music I was listening to was still going so I’m pretty certain it’s the display.

A couple of hours ago the phone dropped from about 30 cm height but was fine for hours after. Could the drop be the problem?

Do you think I can repair this myself or do I have to send it in?

Thanks in advance for your replies!

Sounds like a loose connection. Try dismantling and reassembling.

There are many posts on such issues.

Since I updated the phone last week when I unlock the phone the screen flickers and I can’t use the touch screen until it stops. Has anyone else had this issue and is it anything other than a software issue? Sam

I have the same or a similar problem. The screen is not working reliably anymore. It works good for a few hours, then it starts flickering, then it doesn’t work at all anymore (to be more precise: backlight works, but no image is shown). Some time later, it works again. Sometimes, it helps to apply pressure to the screen, sometimes it doesn’t. I have already disassembled the phone two times and cleaned the connector contacts with distilled water.

As the connection on the Fairphone 4 is quite different from the one on the FP3(+), the old posts are only of limited use.

Some questions I have about this:

I have to admit that I already had several drops and also some water accident with my phone. There are also damages from my clumsiness. So, I fear a repair by Fairphone will not be covered by the warranty.

Somehow related:) Are the screws that hold the screen to the body important for the connectivity?

I guess that no-one except FP can confirm definetly. I doubt that all screws are mandatory, at least I think for the FP3 we have seen that the phone worked without any of the 13 screws. Which screw exactly is missing?

Is the cable between screen and body really the only connection? Or are there some other contacts between them?

Did you check the ifixit repair instructions, maybe they mention something, if the official FP videos do not?

s it normal that the glass can be lifted from the display frame (see photo) or does that mean that my display is broken and that is the cause of my problem?

I doubt that this is normal. I have seen this for the FP3 and I think one root cause was incorrect dismantling. From the FP4 repair instructions compaired with those for the FP3 I think for the FP4 this should be no reason, as you would not use the opening pick from above, but from side. I remember for the FP3 there was a warning either in the ifixit teardown or the official FP instruction to replace the screen.
Is it possible the screen connector at the screen part is loose due to this?

It has now gotten worse, I can only get an image by applying hard pressure to the bottom half of the screen, making it impossible to use the phone.

After disassembling the phone again and noticing other things, I guess there is not really another solution than to order a new screen, as everything leads to the conclusion that I broke the screen.

Which screw exactly is missing? 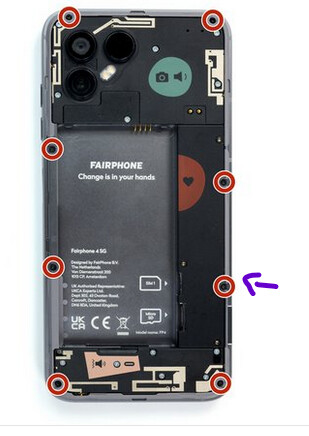 Did you check the ifixit repair instructions, maybe they mention something, if the official FP videos do not

Is it possible the screen connector at the screen part is loose due to this?

It is possible as not only the screw is missing but the thread that I ripped off and glued on again fell off again and is now lost, very near to the position where the cable is connected to the screen: 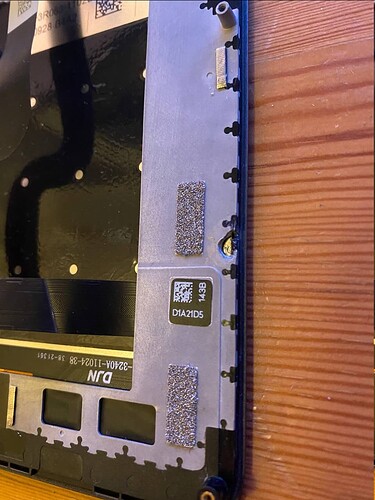 Another thing that I screwed up is that I folded the cable the wrong way at some point, so now it has kinks: 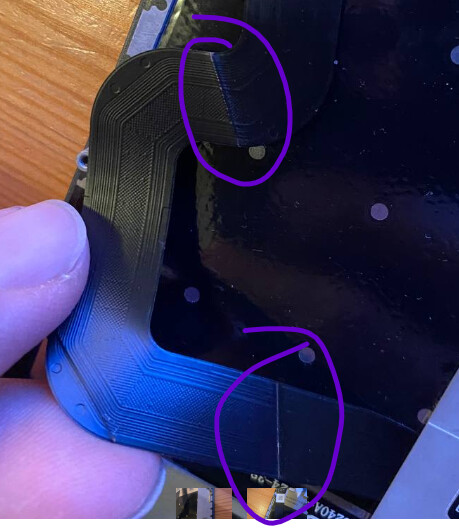 Hi Discostu36
This is not a good idea. Use only isopropyl alcohol or high grade medical use alcohol for cleaning contacts.

Seems like some other Fairphone user bought the last bottle at the pharmacy. I‘ll try again tomorrow.

The alcohol didn’t change the situation. Support tells me to send the phone in and they‘ll see if warranty is voided or not. I think this will only take longer and be more costly than to order just a new screen as I highly doubt this will be a repair under warranty. What do you suggest?

maybe someone in Kiel would be willing to check with you if its the screen, I would actually, also doubt that this would be a warranty repair

maybe someone in Kiel would be willing to check with you if its the screen,