Today I thought that water may have gotten into my FP4, so I thought “No problem, I’ll just disassemble it and have a look”. I didn’t consider that I may be lacking the necessary manual skills.

Result are some stripped screws (one so that I wasn’t able to loosen it at all) and a broken-off thread at the display that I had to glue afterwards.

So the whole marketing about a phone that is easy to disassemble and repair is only kind of true. It is easy if you are at least vaguely talented in such things. If not, you’ll probably break stuff.

By the way, there was no water inside the phone. 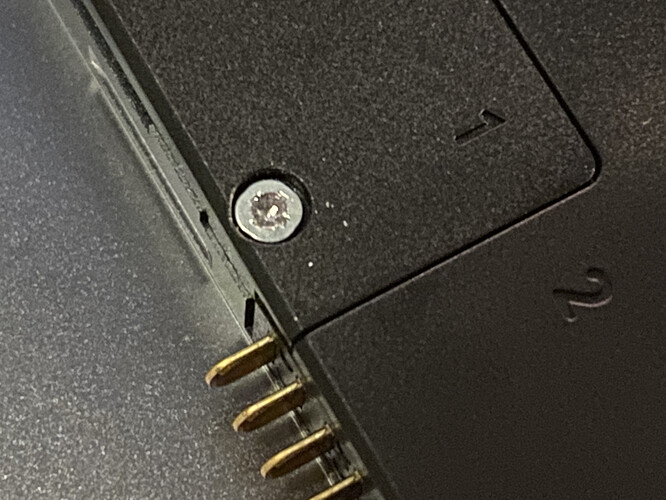 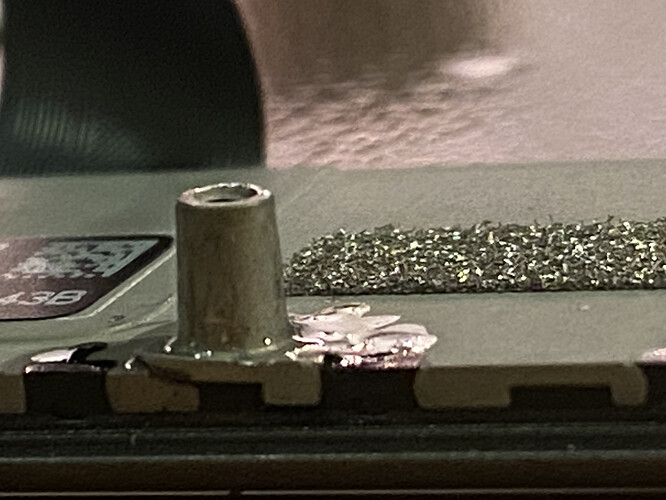 Hi seems a bit upsetting given the ease with which I imagine it would be. I have reassembled an FP3 with no such issues.

Once the head is trashed, as in your pic, you may find a very ‘sharp’ normal blade, with enough pressure, may grip and undo the screw.

Already managed similar issue with FP3. I find the screws to be made from quite soft material and/or too tiny, which makes them easily stripped. But basically following @amoun hint very closely it works out best to avoid such issue.

Hard luck! Thanks for sharing your experience. I agree that while these devices are designed to be taken apart if necessary, it’s probably unwise to do it other than when strictly necessary.

It’s also important to use the right tools (which need to be in good condition themselves). What screwdriver did you use?

I used to have a favourite adage, If it works, don’t fix it! though that of course precludes preventive measures, which is what you were trying to do.

For others who may come by, here are some ideas on the subject of screws. I’m not saying I think they’re all good, and every situation is different. Use with precaution. And my lawyer says don’t forget to add a disclaimer

it’s probably unwise to do it more than strictly necessary.

I would agree wholeheartedly, however then think of how many times a fairphone angel may have removed and replaced screws.

Maybe that’s why they are angels, they have the right touch, Oops! I just signed up to that and I’m known to be heavy handed at times.

Sending my FP3 to France for a stripped screw Fairphone 3

I recently had similar issues and another/bigger screw driver helped. overall I have the feeling the PH00 is not the best for screws sitting very tight. Do you not have any mobile repair shops or repair Cafés, modeling communities, radio operator community close? I would assume such shops/communities are used to work with such tiny screws and mightt be able to help. And if you then need a replacement screw, I can send you some.

And if you want to order some screws

Just to set the record straight: The FP4 screws are not countersunk. They have a flat pan head Their specs are M1.4x4.5. Please find the technical drawing attached [Screenshot 2022-01-14 at 09.37.56] I will ask our CS team to publish these specs somewhere on the support pages as well. Cheerio

And some further tips…

Help! How Can I Remove Stripped Screws from My FP3!? Fairphone 3

I found this thread on iFixIT with quite a few tricks you could try. But choose wisely and maybe take the phone to a repair shop or repair-cafe, if you are feeling uncomfortable with it. Or this trick, that is linked in the above thread: There are two (amazon) links to special tools and a glue solution And here you find a list of repair-cafes https://repaircafe.org/en/ If there isn’t one in your area, you might try looking locally, because I wouldn’t expect all those initiatives to b…

This could have (at least partially) been avoided with TORX® screws.
Did Fairphone at some point state why they chose PH00?

Most normal people probably don’t have a PH00 screwdriver anyway, is a torx one really that hard to find?

Since the screw measurements are know, maybe it would be a good idea to replace the screws with a fitting torx version, to ease future repairs…

Most normal people probably don’t have a PH00 screwdriver anyway

I thought that came with every Fairphone ??

Both FP4 I unpacked didn’t come with one

Fairphone left out the screwdriver from the FP4 package because “customers complained it was included” (claiming it wasteful) with the Fairphone 3 and 3+.

Only the review units for the FP4 came with a screwdriver (the iFixit one, though).

I can really recommend the iFixit Essential Electronics Toolkit (especially for Fairphone Angels):

The Essential Electronics Toolkit contains everything you need to successfully repair your electronic devices. All the tools come neatly arranged in a handy, compact case.

seeing those pictures you took, I assume you are not quite used to using either a screwdriver or glue. I hope you accept to leave such repairs to experts. I absolutely confirm your assumption: “It is easy if you are at least vaguely talented in such things. If not, you’ll probably break stuff.” It’s still a complex technical system we are talking about. Once opened, we can simply destroy it e.g. by electrostatic energy from our fingers due to lack of grounding. Not talking about wrong tools (Phillips/Pozidriv, Torx/Allen, inch/metric,…).
The Phones I owned until now were Ericsson, Nokia, Samsung, Blackview and Apple. None of those even got CLOSE to being such easily opened, disassembled and reassembled as my FP2 & 3.
Good luck and may your Fairphone never needs to be opened again!

This could have (at least partially) been avoided with TORX® screws.

Speaking of torx screws: What torx size is used for the main module of the fp4?

I can really recommend the iFixit Essential Electronics Toolkit

I thought that came with every Fairphone

Mine most certainly didn’t

Fairphone left out the screwdriver from the FP4 package because “customers complained it was included” (claiming it wasteful) with the Fairphone 3 and 3+.

I agree that the iFixit tools are extremely useful for such work. I got the iFixit Pro Tech Toolkit for that very reason. It includes JIS bits that slip less in my experience when used on (tiny) PH screws and thus make it less likely to strip them. But it is still important to

In most cases a combination of more pressure and less torque/slower turning of the screw helps, sometimes it is required to adjust the bit size up or down.

This could have (at least partially) been avoided with TORX® screws.
Did Fairphone at some point state why they chose PH00?

Most normal people probably don’t have a PH00 screwdriver anyway, is a torx one really that hard to find?

My best guess is that small Torx is even harder to come by than small PH drivers. So they might actually have tried to be more “user friendly” by doing this.
But I agree that Torx would probably be the better choice as you can apply more torque and cam out is less likely. When I have a choice for any application, I always choose Torx over PH or PZ now…

The advice to apply a bit more vertical pressure seems spot on to me, yet is sometimes hard to convey to people. I had a fellow Fairphoner here once who actually tried to get out the screws (and back in) by rotating the screwdriver between thumb and index + middle finger and the blunt end of the screwdriver sticking out of the hand.