After 4,5 years with my FP2, I decided to change it for a FP3. Since yesterday I am playing around with this new phone and noticed following phenomenon : photos taken directly within Whatsapp do not focus and are blurry, whereas photos taken with OpenCamera are sharp.

I shot several photos within Whatsapp which appeared sharp on the screen (before taking the picture, but with the phone steady) but blurry once shot, as if the focus had been lost while shooting the photo.
Having read the different reviews about the FP3 and especially its camera, I was quite worried. Therefore I tried the same photos with OpenCamera, and these appear sharp (see photos at the end of the post).

Did anybody experienced the same issue ? Is there a workaround to force Whatsapp use Opencamera settings for instance, or anything to calibrate ?

I know the obvious solution is to shot all the photos with OpenCamera, then send them via Whatsapp, but I am here more wondering why this phenomenon appears.

Thanks for your thoughts on my topic

Hi Urs, thanks for your message.

The 4 photos I uploaded have been downloaded from Whatsapp, including the one taken with OpenCamera, which I sent, then got sent back.
Therefore the issue does not come from the compression rate, but happens more likely directly while the photo is shot or saved.

I noticed the same thing. I also take photos in Open Camera now but it is annoying I can’t use the photo feature in WhatsApp. WhatsApp pictures turn out blurry without fail.

To my knowledge the bad image quality of pictures taken within WA is an issue of WhatsApp on any phone.

I’ve come across this topic several times over the years,
Here’s a recent article (in german) on this: The advice is taking pictures with the Camera App and only then share it via WhatsApp.

Hi Arne, thank you for sharing !

I indeed noticed the size difference between the 2 photos, but didn’t realise it implied a digital zoom in photos shot through WA. So it seem I should use OpenCamera anytime instead.
However this does not explain the focus issue.

In fact, maybe it is something WA does on every smartphone but I didn’t realise it earlier due to my previous FP2 bad photo quality ?

Anyway, I’ll use OpenCamera from now on and share the photos in WA afterward, even if I lose in spontaneity.

From what I read, Whatsapp will compress your photos taken with other camera apps, too. The only way to avoid that seems to be to edit the suffix on the photo (e.g. from .jpg to .pdf) so Whatsapp will be tricked into taking it for a document and not apply compression. The link I had originally provided explained this, but my comment has disappeared (don’t know why).

Yes I noticed your comment has disappeared, I thought you had deleted it.
Thanks for the info !

The fact that photos are compressed within WA is not my main concern, as long as the recipient can see what I want to show. Therefore the quality of the OpenCamera photos shared through WA is good enough for me, whereas the photos shot directly within WA was not.

I’ve had this same problem since I bought the Fairphone 3 a few months ago.

I have the feeling that the blurring is not a “physical” issue (the lens not focusing to the right point, or having a lower shutter speed that causes the movement), but I think it is an image post processing issue, so WhatsApp probably does not apply any kind of “focus” to the image (I think FP3 Camera and Open Camera does).

The same thing happens to me with the size, the WhatsApp crops the image to an aspect ratio of 16:9, while the default camera app (or Open Camera) takes better advantage of the sensor and shoots at 4:3.

For these two reasons I always use the camera that comes by default with the Fairphone 3 and not the WhatsApp app. It’s a bit annoying sometimes because you have to do a few extra steps, but it worth it in quality terms.

These photos that I attach were taken with the WhatsApp application and with the original FP3 camera application, while the FP3 was stand in the same place, both in automatic mode. I used the WhatsApp app also to transfer the files from the FP3 to the PC (via WhatsApp web), so both are compressed by the application. 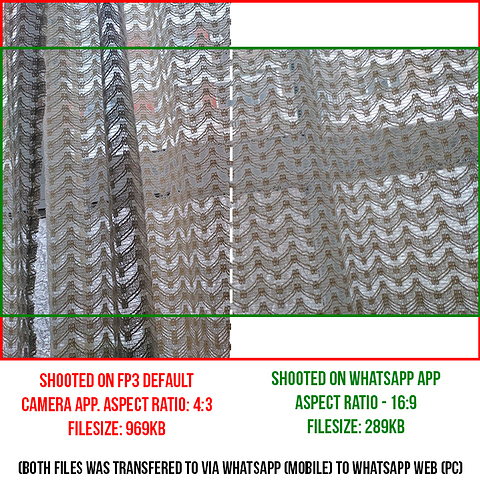 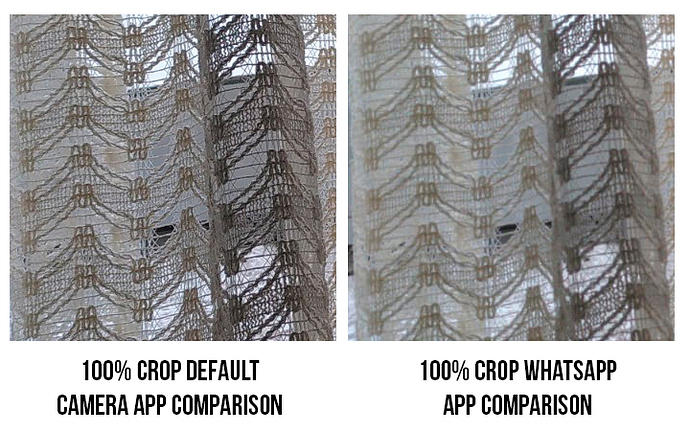 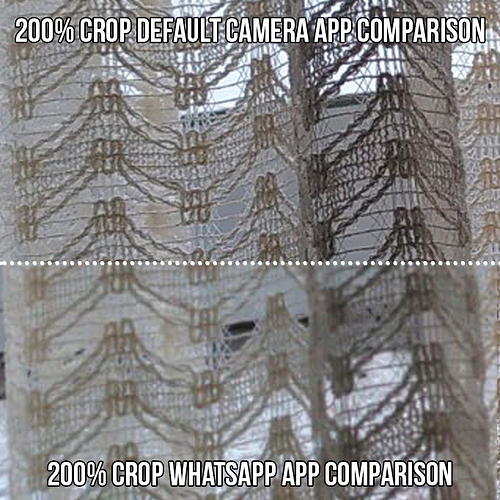 I also tryed to focus the WhatsApp image in Photoshop. Results are more like the Default camera app processing: 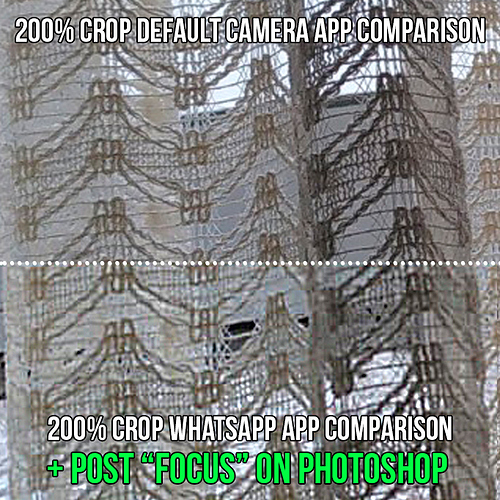 Thanks Miguel for your post and your investigation, it is really complete !

So I’ll stick to the general workaround, using another photo app than the WA integrated camera function.

Thanks to all of you, I’ll close the topic

Currently I use OC with the original camera API and then attach the picture in WA. Annoying, but at least it works.