Does anyone have figures of the weekly (or so) sales of FP1? It would be interesting to compare.

I was wondering the same thing today. Maybe @anon90052001 can give us numbers, can you?

(I guess Fairphone doesn’t want these numbers to be shared, to not spoil the FP2 sales…

By my (probably wrong) calculations I think they might have sold around 250-ish yesterday?

If my job working in digital marketing has taught me anything, it’s that people really respond to a deadline.

For all our major campaigns, the biggest action has always come in the final couple of days. Could we be heading for the same thing happening here?

Definitly, my FP1 still works and 500€ is not what I spend for a phone. Also, I don’t like the 5" size. I hope that when FP1 finally dies or gets too slow that there is some manufacturer that produces 4.3" or even better <4" quality phones and not just a stripped down cheaper version of a bigger phone. I acknowledge that people heavily using their phones are frustrated by small displays. The pocketability vs usability trade-off has swung towards usability as the phone stays in the pocket less and less and thus display sizes have exploded. But it’s a trend that I’d like to see reversed using different HCI technologies. Display-touch certainly isn’t the “Amen” here.

TheDon you are right and I must admit … I’m buying it DESPITE the 5" screen.

However,you can see the problem with small handsets when people want a decent sized battery, a fast processor with big cooling needs, all those antennas (quad band telephony, GPS, WiFi), sensors (rotation, acceleration, touch, proximity) and “need” an HD plus screen. Especially if the handset has to be capable of dis-assembly… Tho why anyone actually wants HD (let alone quad HD) on a mobile is a mystery - my best 17" laptop has “only” HD = 1080x1980 and broadcast “HD” TV is only 1280 x 720 on a 36"+ screen; I guess the Galaxy 6s only needs 2,560 x 1440 for bragging rights.

dunno - I started mobile games like fallout shelter recently, which a huge lot of people are doing and I gotta admit, that the FP1 screen is too small for an ideal experience.

Same here. I don’t need an HD screen and I’m perfectly satisfied with my current 4,3’’ screen and don’t really like bigger phones. Yet my current phone’s life is going towards its end already, so if don’t want to buy a conventional phone, I have to go with this 5’’ Fairphone

Let’s not go too far off topic with this, there have been several discussions on the screen size already

Yes, but that’s what tablets are for. If you tried both phone and tablet for gaming you know that phone is just a compromise.

Needless to say that there is demand for a Fairblet

Remeber you hold the smartphone much closer to your eyes then your laptop screen.
Also we rarely read text on a TV. Quad HD on 5inch might be bragging only, but HD definitly makes sense. Pictures looks stunningly sharp, but even more important, readability of text improves a lot with resolutions above or near the “retina capacity”.

Still, it will need some serious marketing effort to push the FP2 over 15 tousand units now. There are roughly 10 days left and over 3000 phones to be sold. I think the recent blog on software support for the FP1 was good to build up trust, but what is need is a more definite statement on alternative OS suppport and even more important, Open Source strategy for the FP2. It would also be helpful if Fairphone would provide tech-sites with working prototypes.

However, this is wishful thinking. If such strategy is not yet finalized and working prototypes aren’t yet in a state ready to share, there is not much to be done.

Would love to see someone in my friends list posted something about Fairphone but nothing even close to that has happened yet.

Just ordered one and hope the target gets made, despite slightly breaking the bank for this and next month.
It was a tough choice given how cheap mobiles are getting but hoping the extra upfront cost of the Fairphone 2 will be offset by the replaceability(?) of the parts in the long term.

Best of luck getting the phones to as many people as possible!

It really got stuck to that number too. Keep f5:ing, but nothing happens… 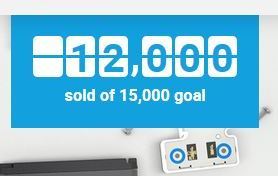 To answer my original question: Probably YES !!! Just logged on to see if we’d hit 13k yet … and

which exceeds my highest prediction with a week to go.

I am pretty sure the Open Source announcements played a role here – as well as last minute shoppers – like me. I am currently making my buy dependent on something i’ll learn on 30.9. so i might be one of the last people to pre-order a FP2.