Where have you taken the graph from? What’s the URL?

Then they have reason to be optimistic.

Well, it’s obvious that in their marketing they’re going to have to be relentlessly optimistic. Would be kind of counterproductive if they said “naaaah, we’re probably not gonna make it”

If you mean the one I posted most recently, it’s from Fairphone’s Facebook page.

There will probably be a last week surge when people pay as late as possible. After all, paying early is gving FP an interest free loan from which the consumer gets no more than a warm feeling - which is just fine by me; I’d rather loan money to FP than subsidise the Porsche funds of a wunch of bankers.

It was on Facebook and you can also find it on https://www.fairphone.com/events/

So the numbers seems to pick up, but maybe still not enough. Anyone with a nice graph for it? I still haven’t lost hope even though it seems more and more unlikely it will reach 15 000

Daily sales updates have been uneven but it looks OK again today (there appeared to be only around 50 a day over the weekend then 350 or so in the last 2 days) Dutch banking holiday?? 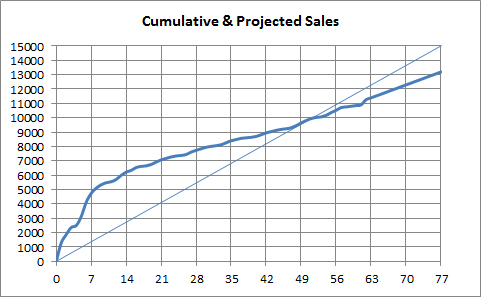 It is important to note that nothing catastrophic will happen if the goal of 15000 phones is not reached until the end of September. It’s not a Kickstarter-Style crowd-funding.

Yes, the money is needed to bootstrap production, but the FP2 will be produced and sold anyway.

As they told they’ll going to adapt the production numbers for regular production. Also a big sale off in the last week by People who are going to order to save the Money until the last possible time and/or the big Network Provider may be able to Archive the Goal.

Yes.
Also I hope pictures of the alternative translucent case will appear soon in the shop, and on Facebook. It should attract some people. What is it stockbrokers always say? “Previous performace is not a guarantee of future gains”.

My predictions are purely based on the cumulative actual sales and the past week’s average sales.

I’m also hoping for a last minute surge … as I want FP to be saved from loaning any money, which will eat into their income and increase that of bankers … but it’s suprising how steady the rate of orders has been since the start of August, with a slight up-turn since the coloured case was announced!

I want FP to be saved from loaning any money, which will eat into their income and increase that of bankers

I’m wondering what the exact problem is if they do not reach the 15000 pre-order target. Is it that total sales volumes (so also after the pre-order phase) will also be projected to be lower (and costs become higher), or is it just that the starting capital raised is not sufficient? In the case of the latter, shortfall can potentially be made up by large investors / banks, but it could be possible to crowd-source a loan. Probably that won’t happen in this case due to time constraints and the myriad of rules and regulations that vary for each country that the Fairphone has an audience, but there are some successful (and unsuccessful) examples out there.
In short: it’s not necessarily bankers that would benefit.

I’m wondering what the exact problem is if they do not reach the 15000 pre-order target. […] or is it just that the starting capital raised is not sufficient?

I believe that’s it.

In the case of the latter, shortfall can potentially be made up by large investors / banks, but it could be possible to crowd-source a loan.
[…]
In short: it’s not necessarily bankers that would benefit.

True, that would be a possibility, but I think Fairphone will go with a bank loan, because they always said they want to stay financially independent, even from private donations and even if that means that bankers might benefit.

which is not necessarily a bad thing. as long as the relationship is fair, i do not see a problem with financial benefits from a loan. you do take a risk after all and cannot use your money while lend, that might be worth a compensation, don’t you think? 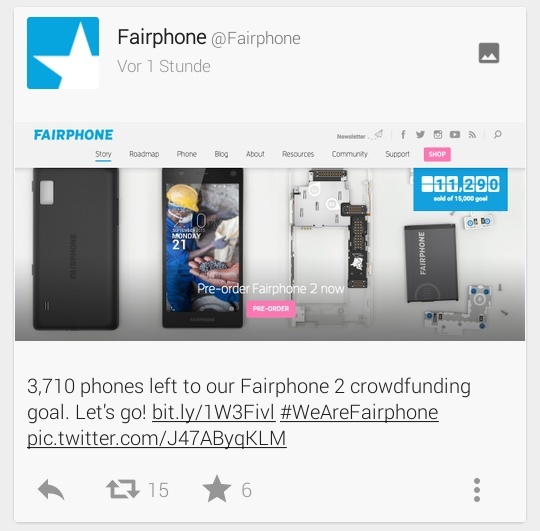 September’s better so far than August. Let’s hope for a final speeding up towards the end of the month and getting as close to the goal as possible. Even when it will be just 13000 to 14000, I’m less worried now. Events will be held with the final prototype and new folks will again decide to buy once they have first hand reviews. Just like I did in 2014. 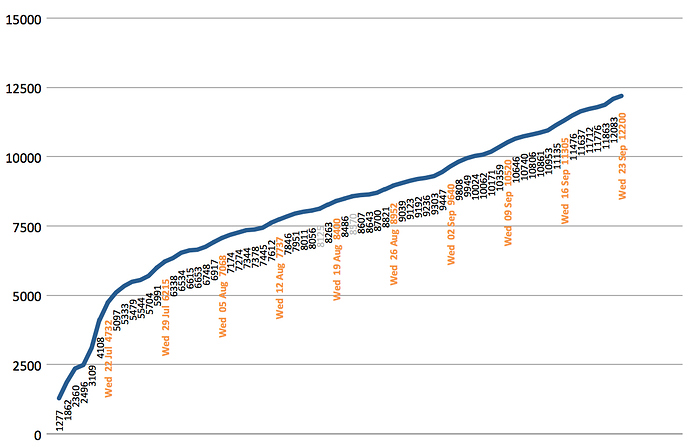 Wasn’t there a bit of a sales spike near the end of the preorder period of the initial batch of FP1 as well? Same might happen again. Could be that people who are in doubt will still order under the pressure of time.

Yeah, I just thought, “hey it was quite close with the FP1 too. And we made the hurdle with only 185 phones.” I think we have to prepare for another close race!

I think we have to prepare for another close race!

They should set up a live broadcast from the Fairphone office on September 30th.

500 Euros is a lot of money to shell out in one go. There’s a good reason people prefer to take out contracts and split the cost over 24 months.

This is especially true when you won’t actually get the phone for months. Even people ordering at the end of September won’t receive theirs for around 2 months.

With this in mind, I’d hope there are quite a few people waiting until September’s pay-day to order theirs.

I’m an optimist, but I reckon we’ll see the biggest spike since week 1 in the final week of this month. It might not be enough to get to 15,000 but I expect we’ll get close.