Where are the options for the Notification LED?

I cant find any options for the notification LED.
I remember that i found it one time and i could set the time how long the LED should be off and on. The Standard Value is 3 Sec off/1 Sec on.
Does anybody know something about it?

I don’t find that anywhere and I just went through all settings options. I found options for Amber Alerts and for remote wireless displays, but nothing for LED.

Thanks for the answer

As far as I remember, LED options are not available by default on the FP1 either. It probably takes some extra module installed to have access to such settings.

My wife’s fp2 is doing it for messages and calls.

Maybe I turned of, but I cannot remember where. Any idea?

I cant find any options for the notification LED.I remember that i found it one time and i could set the time how long the LED should be off and on. The Standard Value is 3 Sec off/1 Sec on.Does anybody know something about it?

You can edit the LED settings per App (provided the App supports editing the settings).
For example in Whatsapp you can edit the color and blink settings.

The options seem to be not “activated” (in terms of accessibility): if you go to settings and then search for ‘pulse’ you will find an entry called ‘Pulse notification light’, which should be the designated settings entry. (According to web research - but can’t find the links now) if you click on it you will find yourself in the (known) notifications settings.

@Douwe how are the chances of this menu to be activated in an future update? 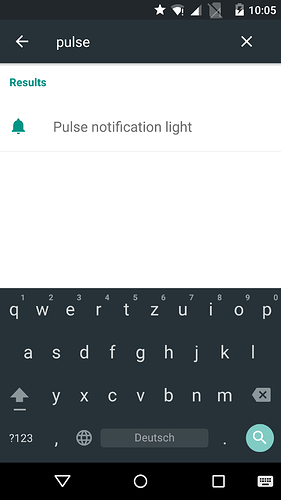 @douwe how are the chances of this menu to be activated in an future update?

Hey, I saw your question, but probably I will not be able to get an answer very soon. Sorry about that.

Yes i know, thank you.
But it doesnt work. Only red functions.

@douwe thx, appreciate already the fact that it is on your/fp’s radar!

I have a stupid question here: Where is the notification LED supposed to be?
I haven’t installed a messanger yet so I cannot test.
When the battery is empty nothing happens even when there is already the exclamation mark in the symbol and while charging nothing lights up…
I disabled the google stuff as far as possible but this shouldn’t have to do anything with it, should it?
Any ideas?

Just “to see your LED is ok” I propose: shutdown your phone and then start loading while “powered off”. You should see red LED then. When accu loading reaches 100% then LED will change to green (all before booting phone)…

After 1 sec it lights up.
My old phones also shows the battery loading status when turned on (and screen is off) so I was a little bit suspicious…

Edit: Ok after startup and on the charger it now also shows the light … also with unplugging and plugging in again… weird … as if the LED needed a start or something…

Sonne, no worries. I think what you expect is what you’ll get

Just be patient. How it behaves now is imho just a bug. You find it on the “official buglist” under https://fairphone.zendesk.com/hc/en-us/articles/207228996-Fairphone-2-software-issue-report

Strange. I get no results when i search for pulse

How does your red LED pulses/blinks, if you have notifications (and configured it to use the LED)?
In my case the LED only pulses in an ascending and descending manner (about 500ms rising, 500ms falling time), which I find quite annoying. I prefer an instant ON/OFF for better visibility.

I use it with “Prof. Reminder”, which manages the reminder after receiving sms or missed calls.

The FP1 has only ON and OFF as notification with the same settings, which I liked much more. The idea of notification LEDs is to notify the user about something. And that is proved to be more efficient if the pulse is more “digital”, thus without a noticalbe rising time.

Following this thread also my green and blue LED is now working.

So my question is: how is the behaviour of the LED driven?
By hardware, Android, or by the individual apps?
Where can we tweak a little?

I did the fix and unlocked LED colors other than red.
Now it’s blinking a lot with different colors, do you know what is the meaning of each one ?
ie, is there a color for mail, sms, voicemail ?
and is there a way to configure this ?
Thanks