This one looks great

Hi again, I just talked to the head of our product team. The official word is that we’re not planning to sell the bumper separately any time soon. Focus is on the cases as the go to accessory to protect your FP3

What I prefer in the bumper is that it uses less material to be built and so is more sustainable according to me. I hope Fairphone will reconsider this idea in the future.

I think that’s a sensible decision. Let’s just bear in mind that once the new protective cases are available, those who buy them will remove their existing bumpers from their FP3s and might not need or want them anymore. Some FP3 owners might have never used the bumper in the first place or replaced it with a third party case as well.

So if anyone should ever need to replace a broken bumper, the odds are high they will find a used one easily.

Bumpers do not protect the camera glass, I had to replace two new phones just because of them getting shattered or badly scratched. Naturally with fairphone I can just replace it easily, but still, the bumper provides limited protection for blue collar workers such as myself.

But for that kind of protection you will need a sleeve or a flip-cover.
The colorful protective cover will neither protect camera-lens nor display. The glas-parts remain unprotected.
You will find some threads here, that already covered that question and had some links to different kinds of protective covers (felt, leather, bamboo).

Cover for the FP3 Fairphone 3

On my search for a good cover for my FP3 I came across the reboon covers. They seem to be quite versatile and well made. The big plus is, they are not dedicated to special mobile phones. So I could find a case that would match the FP3. I decided to buy the Boonflip XS2. For anybody interested, I’ll share some pictures of the FP3 with and without bumper put into this cover. Without bumper, I’d say it fits quite perfect. With bumper the FP3 becomes a little too long. So the bumper will stick ou…

By accident I have two woolen felt case in sleeve-style for the FP3. Westerman bag. I’ll send one free to whom wants it, (to western europe). I also have a bamboo sleeve for FP2 ( which was stolen without sleeve). Also free.

It is probably pretty good, because my FP3 fell down along a staircase (okay, with a carpet on it) for 2-3 meters and still works fine without a single scratch. There is only a small “scratch” on the bumper if you look close. So that thing seems to serve its purpose well. Did anyone have similar experiences? I once had a phone that fell on a stone floor from 1 meter -> screen dead. Should the rubber bumper help in such cases?

While not actually covering the camera, the cover will presumably protect the camera from the most common mode of damage: scratches from laying the phone down on a hard surface.

But against that kind of damage, there already is a rim around the glas of the cameralens. Just putting it down shouldn’t do any harm. (Same goes for the display.)
I expect this protective cover to be a light shock absorber and to keep the translucent casing free of scratches and cracks.

Unless there were grains of sand… sand is the arch enemy of gorilla glass since it can be higher on mohs scale i.e. more than 7

As for the metals they won’t harm it, I’ve seen youtube video where it would get scraped with all kinds of metal objects and even hit with a hammer, not a scratch.

Since there is no info on the material used for camera glass I would assume it’s just plain old glass unless someone from FP will confirm that it’s not. If it is the same gorilla glass 5 I will be content with a silicon case.

Concerning the screen I have already ordered a glass screen protector from Germany, in my experience they are very reliable but it also depends on the quality, right now I have a conventional matte plastic screen protector which distorts the screen on a white background, really ugly.

I think it would be nice if one warm and one cold color were chosen, so that at least there would be that kind of variation between the two eventual covers.

I use it mostly at work so yea. Velcro is an interesting idea but this is not just about me. If it was up to me, I would design the protective case with a bit of elevation around camera.

Also glass screen protectors are awesome, and one designed specifically for the camera glass would be revolutionary.

The camera is an optical instrument, that to many people is extremely important on a phone. Adding a protective cover with glas inset or protective glass would most likely decrease the optical quality of any camera.
With DSLRs there even is a discussion, if one should add an UV-filter as protection for the front lens. Though this is an optical tool as well, connected via a specifically designed thread, it is argued, that it affects the optical quality of high quality lenses negatively.

And the elevation (or rim) is already integrated into the of the cover at least of the FP3.
This might nor help against sand. But a rim thick enough to do that would most likely be considered ugly and it would add relevantely to the thickness of the phone.

The camera is an optical instrument, that to many people is extremely important on a phone. Adding a protective cover with glas inset or protective glass would most likely decrease the optical quality of any camera.

I tried to use a piece of screen protector and haven’t noticed any decrease in optical quality, but it does not stick well, in any case it would be optional.

And the elevation (or rim) is already integrated into the of the cover at least of the FP3.
This might nor help against sand. But a rim thick enough to do that would most likely be considered ugly and it would add relevantely to the thickness of the phone.

My advice would be to use a sleeve or another cover, that is covering the camera as well. Then the camera is endangered only when you take the phone out (for taking pictures etc.). To me that seems to be a good compromise.

I used to have a pouch ten years ago, not very practical, plus the chances of dropping the phone while taking it out of the pouch are multiplied. My point is the design should be fair for everyone including those who work in the field.

I would wish me a Blue Bumper!!!

Green and Orangeis my favorite colors

Fairphone has announced that they will produce a green and (as originally announced already) a black case first (FB announcement has a few words more than Twitter): 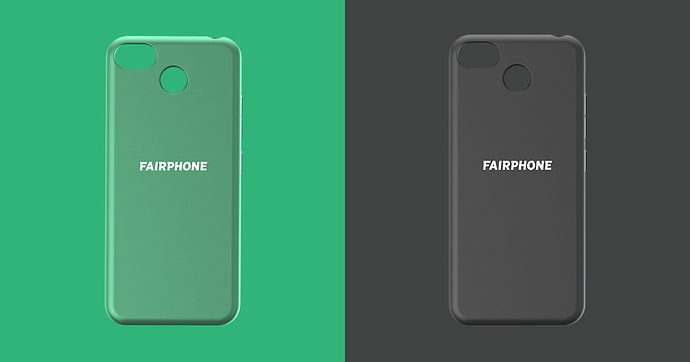 A huge thank you to our community for participating in our poll. We’ve enjoyed reading your comments and we’ve taken your suggestions to heart.

The results are in and we are going GREEN…well, even greener!

We are thrilled to be introducing green and black protective cases first. We will continue to keep you updated on further options later.

For future polls and discussions, check out our Fairphone Community Forum

A transparent back cover and protective case for me. I think it is more poetic than green.

I think they’re afraid the transparent cover might crack, like with FP2. They’ll probably run long term tests on it before announcing it.

Hmm… it seems those covers were too tight and the stress made them crack.