Voicemail symbol will not go away

Hi everyone,
a while ago I got a voicemail and later deleted it. However, the voicemail symbol on my fairphone remains and no matter how often I try to call my mailbox (which definitively has no new messages), it will not disappear. It disappeared when I turned the corresponding SIM-card off, but just came back when I turned it back on.
Any ideas how to get rid of it?
Thanks in advance!
Jutschet

I cannot imagine, which Voicemail symbol you mean, could you upload a screenshot? (I leveled your user account up, so you should now be able to post pictures.) 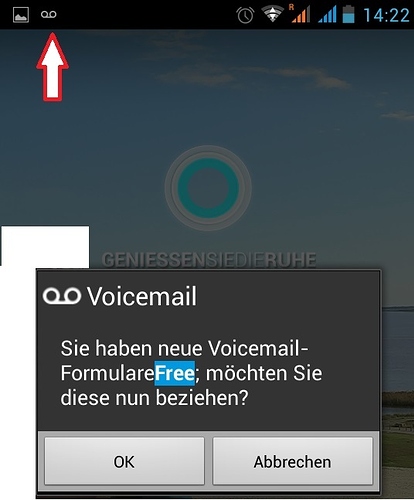 So the symbol indicated by the red arrow is always present. If I go to the pull-down menu and click on the entry “new voicemail” the shown message shows up. I press Ok and am referred to my mailbox. There, as said, no message is pending anymore.

Well, to be honest, this looks a lot like Malware to me, for the following reasons:

I’d go to Settings > Apps > All, see if there is any app, which could correspond to the notification and try to uninstall it.

Normally I am very careful about the apps I install. I couldn’t find anything strange in the app list, too. Especially not in the “active apps” tab (but I checked “all” as well to be sure). My Fairphone says the android is version 4.2.2. I made the last big update but not yet the latest.
I did also get my notification via sms for the voice mail, but I typically get the symbol in addition. And it calls the correct phone number as well.
I have the Xposed framework with XPrivacy installed. Can that interfere with some system apps? (I never changed their permissions manually)

Ah, that is very helpful! It is the “Telefon” (which means the phone app itself). It says version 4.2.2, so just as my Android. Can I safely press “delete data” or will that harm my other phone settings?

Well the symbol is at least gone … I will see if anything else changed probably after a while (or hopefully not). Thanks for the help

It is the “Telefon” (which means the phone app itself). It says version 4.2.2, so just as my Android.

Curious! I’ve never gotten this notification from my Telefon-app. It seams that your provider notifies your phone in a special way.

A post was split to a new topic: Cannot make voicemail notification disappear