r/LineageOS - Does 15.1 include the circle battery?

But there’s a setting to display the battery percentage in the status bar, I find that much more helpful (had to install an App for that otherwise) …

F-Droid seems not to realize it just updated an app, it regularly offers the update again (but this may be an f-droid problem)

I had this, too … I think it was some permission thing … I can see that I did disable Privacy Guard for F-Droid, but I don’t know anymore whether that solved it.

The only thing i found myself was being able to show battery percentage always… Thought it might use to much of screen estate, but trying it anyhow… .

Upgraded last week my tablet to 15.1 and now upgraded FP2 from 14.1 encrypted to 15.1.nightly with TWRP. I only wiped “System” partition (as far as i see from TWRP when selecting “wipe” System is also formated).
I did not loose any data!!! All apps are available.
Fairphone runs as it should be! Many thanks to all helping hands!

Only 1 remark:
TRUST is new in 15.1. and says that encryption is deactivated but under Encryption there is the indication that the phone is encrypted. This is a little bit confusing.

Following the LOS upgrading guide, the method is different if I have official or unofficial version of LOS 14.1.
But how do I know which on I have ?

You’ll have the official build if you:

You’ll have an unofficial build if you:

Generally speaking, you’ll have an official build if you have been able to download and install OTA updates (Over-The-Air) with the built-in updater, and you’re sure to not use Lineage for microG.

But how do I know which on I have ?

To be honest, i have no idea about OTA or MicroG.
I have never seen this before so I guess i didn’t use it.
I installed lineage following the links in this forum only.
But I can use the built in updater to update LOS and if the date of 20 June 2018 matches with an official build… It should be official.
Also is written unofficial nowhere. 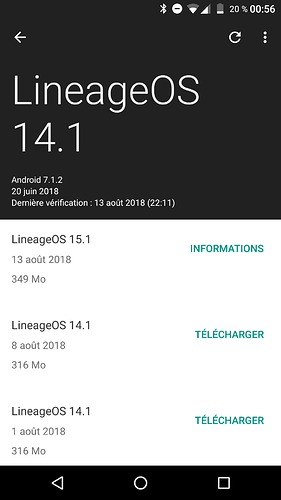 Yes, release dates in the screenshot match with official ones, so you have an official build. Don’t forget to make a backup and store it in you computer before attempting the update. That way, you’ll be able to restore it if anything goes wrong in the process (shit happens).

do i have to wipe something before the update? backup apparently is obvious…

F-Droid seems not to realize it just updated an app, it regularly offers the update again (but this may be an f-droid problem)

It is a issue with Android 8. Manually update to 1.3.x and you’ll fix it. I thought they already pushed that update as the recommended, but I was wrong.

do i have to wipe something before the update? backup apparently is obvious…

I’ll copy this here, just in case: Upgrading to 15.1 We’re starting our 15.1 builds with some devices (listed below), with others migrating to 15.1 sooner or later. Note that several older devices are unable to receive official builds at this time due to the lack of support for working HAL1 camera recorder, which was broken by the treble changes, but don’t worry - we’re working on it. From official LineageOS 14.1 (Optional) Make a backup of your important data Download the build either from …

Installed latest TWRP 3.2.3, then flashed the Update, Pico GAPPS and addonsu without problems. Thanks a lot

But i cant find point described underneath. Where exactly is the three-dot-menu?
Thanks in advance.

Where exactly is the three-dot-menu? 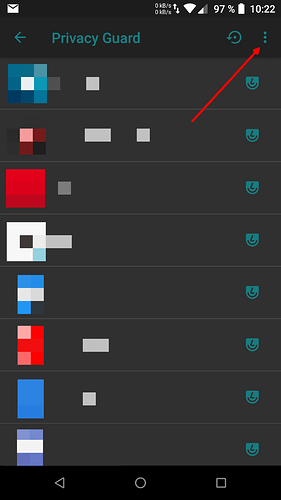 Okay, thanks. I wondered, because i already unchecked the point there but the Notifacations were still there. But after a reboot it seems to work.

What’s that status icon which tells you how much you’re up- and downloading? Kinda sad that with P they reserve that space due to notch (on all phones apparently

What’s that status icon which tells you how much you’re up- and downloading?

I just installed the first official lineage OS 15.1 build via TWRP coming from not official build. However, now I can enable root only for ADB, the majority of apps do not work and I have to reinstall them manually via f-droid or yalp. I think it is a root related problem. Should I install suaddon?
Thank you

I had a similiar problem when updating from unofficial LineageOS 15.1 to the official build. There was a permission problem with some apps (aparrently some settings were lost, and PrivacyGuard also lost some granted permissions). As a result, most of the apps I had installed crashed.

Reinstalling the problematic apps solved the problem for me (no need to delete data/cache).

Edit: I just started over, some system apps crashed as well.

Is it just me or maybe the “wrong” impression of the first fully charged battery or did I have some settings set in a wrong way in 14.1? I have the Impression that my full charged battery again is lasting longer than in 14.1!

The increase was incremental in my perception with every new Android:

If this performance would be lasting in the next weeks, I am pretty impressed and finally satisfied.

Yes, I have to reinstalled the majority of apps. However, I do not know why I can enable root only for ADB…

You probably need to flash the addonsu to enable root: https://download.lineageos.org/extras (be sure to check arm and 15.1 for the FP2)