Hi fairphoners,
beeing a happy user of Threema (without the wish to inform Mark Z. about my life) I had to install an update to version 2.61 (269). After that I had android popups claiming that I have to update google services and Threema claimed the same in order to work well without polling. The default way to that needs a google account which I don’t use on my FP2.
So to avoid the playstore I found
(http://www.apkmirror.com/apk/google-inc/google-play-services/
and I chose
http://www.apkmirror.com/apk/google-inc/google-play-services/google-play-services-8-4-89-2428711-270-android-apk-download/
This worked well and Threema also works well now.
But now I got new popups after booting that the “Google Play Services were terminated” (although I don’t have a T1000 as a butler and no Terminator-App either

) Obviously they are not terminated because Threema needs GCM and is still working but I had similar popups when I had troubles after softbricking my phone.
Luckily I could restore it!
DId I install the wrong Google-Services version on my rooted 5.1 (stock rom)?
Did anybody else encounter similar problems?
Have a nice day!

How did you install Threema? On the website they claim that if you buy the app in their store you can then manually install the updates.

Unfortunately the shops seems to be only in German available:

Thanks Sonne,
I bought from Threema not from playstore. And I couldn’t download anything from the playstore since don’t use a google account.

Hmm this behaviour is weird then. According to threema you should be able to install … Can you manually check for updates and see what happens?

I will install Threema as soon as I have time to play around with my FP2 and let you know how it behaves.

Personally I’m always hesitant to use 3rd party sources for apks, but that’s for everyone to decide themselves. That disclaimer being given:

If you do really need google services (which seems weird for Threema, as Sonne pointed out - but I have neither the FP2 or Threema personally, so I don’t know):
Did you check which version you need according to the instructions when you scroll down on the page linked in the quote above? The […]-270 version shouldn’t be the right version, given that it appears to be for x86, whereas the Snapdragon 801 in the FP2 is an armV7 processor. This would mean that you probably need the […]-230 or […]-430 versions, but the best way to determine this is to follow the instructions given on the linked page (after you’ve restored the stock services).

I don’t think it’s weird:
https://threema.ch/en/faq
There it says:

What kind of data is transmitted via Google Cloud Messaging (GCM)?Threema
uses Google Cloud Messaging (GCM) only to inform the app in the
background about incoming messages. The app then fetches messages
directly from the Threema servers. Neither contents nor details about
messages are transmitted via GCM (the GCM payload is empty).You
can choose whether or not you would like to use Threema with Google
Services. The option “Troubleshooting > activate Polling” allows you
to use Threema without GCM. However, we don’t recommend this.

So I prefer to use it with GCM

OK, first I restored the stock services.
After that Threema claims at once: 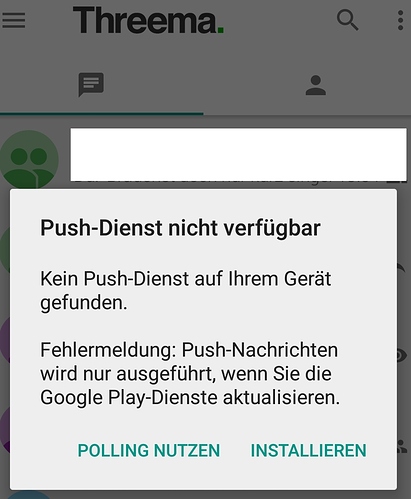 “No push-services can be found on your device.
Error: pushing of messages will only be executed if you update Google Play Services”.

That’s what I would like to do without a google account because I don’t want to use polling.

How can I do that?

You can’t have push without Google.
Why don’t you want polling?

Because it’s faster meaning that I don’t want to wait for the next polling.
And I did have the push service befor the last threem-Update…

i have the same trouble since the last threema update. push notifications worked before via google without me having an account there. so i also wonder where the quirk is. however, until i find out i skipped push services…

thanks christoph,
I contacted the support of Threema. They say an answer takes about one week.

Ok sorry I over-read the part where you don’t mind using GCM as long as you don’t need a Google Account.

My guess: Google allowed Threema to use GCM before so Google could collect some data. Now that Threema users are used to polling and Threema doesn’t want to keep that feature from their users Google could demand Threema to ask users for a Google Account to use the polling feature.

sounds like a reasonable explanation. would be interesting to learn what threema has to say about that issue, though

Threema 2.61 needs the recent version of the Google Play services.

If you don’t want update your Google Play services using the PlayStore, you can download a
recent gapps package from your custom rom provider.

Not (yet?) for FP2, I think. You could try openGapps, where you can also choose which Gapps and services you want to install. This has been discussed in the forum, a search might help.

There is no way to update just the GAPPS afaik, but the newest version may be included in the next OS update. You know, the one with all the bug fixes that everybody is eagerly waiting on.

As I mentioned before, the problem described in the title (google play services terminating after upgrade) probably wouldn’t occur if the OP would install the package for the correct architecture. The approach initially chosen may work (if you trust apkmirror), provided you actually follow the instructions (my guess is this package, but see instuctions at the end of that page on how to check).

ok, thanks to all!
I switch to using the polling service of Threema.

I switch to using the polling service

that’s what i did, too. i don’t realize any major difference in efficiency of notifications. it doesn’t matter so much whether i get notified immediately or within a time frame of ~15 min in most cases…