I have been using my U.S. Sprint SIM in one of the slots of my fairphone. It has international slow data - restricted to 2g speeds - with unlimted texts. Its the number I had exclusively growing up so it’s quite useful for talking with old friends and verifying accounts.

However, it randomly locks because it cannot connect to the network. Then I can no longer use texts, make calls, or use data. I think because the international data speed on the plan I am on is purposefully throttled, it goes below a certain level and then stops working. I have to reboot the phone or just wait a long time and it will start working again. Even more annoying is that this notification that it cannot connect to the network pops up every 30 minutes to an hour and interrupts whatever I am doing.

The other SIM - Fido in Montreal and a few SIMs I have tested out in Germany - always work and my Sprint SIM works fine if I put it into my old iPhone.

Your post suggests you are not in the US, but in which country are you? And, where do you see it “locks”? Do you mean that there is no service / only emergency calls (empty triangle icon) as SIM status?

@Lidwien, if he is roaming outside US, he won’t be affected by US frequency bands, also you can’t see the frequency in use anywhere in Android as far as I know. 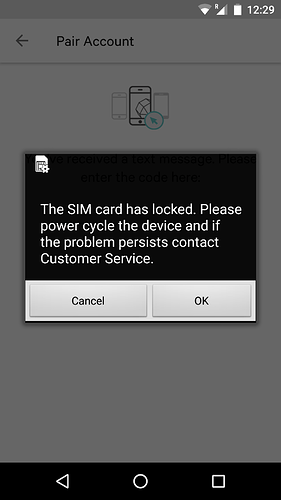 @AlbertJP Heres a screenshot of where the “locked” is coming from. I am currently in Germany. When it locks nothing works except emergency calls - I presume at least haven’t tried to make one.

@Lidwien according to a search these are the frequencies, but I am not in the U.S. on Sprint’s network:

Mostly my phone uses Telekom’s network at the moment, but it changes based on location. This seems to have no bearing on it’s locking. It doesn’t lock when used with other phones.

Thanks for the replies!

Could you look into your account at Sprint and see if your plan with Sprint is blocking?
At my provider I have in my acoount settings a option to allow or block using the phone abroad.

@Lidwien They are not blocking anything. I have an international plan. It worked fine for a couple years abroad with my iPhone running the SIM. It still does if I put it back in.

This looks like a hardware issue. Have you tried putting the Sprint SIM in the other slot?

Yea I did that today to double check. I have the same issue. Other SIMs work fine in both slots.

Some people have reported that changing the sim for a new one solved their problems. But as you are not in the US that could be difficult.

I think either your sim or your phone has a hardware defect. You could try at Fairphone support.

@Lidwien @AlbertJP Thanks for all your help. I will see what I can do on a new SIM and I will try and call support. Maybe it’ll help.

By doing a web search for “the SIM card has locked” I get many hits, mainly from Sprint clients. So it doesn’t seem to be a Fairphone problem but other phones and tablets, including iphones, are also affected.

Maybe somebody with another device found a solution or workaround…

the SIM card has locked

Thank you so much. I feel ridiculous for not searching the error… I will see if I can get a resolution from the Sprint side.