I think there’s something called trademark

The unix way is a bit more safe

here’s something to give you an idea of what I roughly meant. 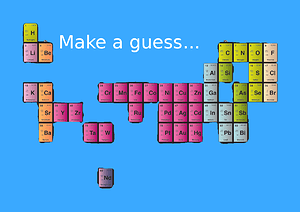 this (without the “make a guess”) is still my favourite.
Possibly with the so-called Fairphone logo as a small bottom line on the right…

FAIRPHONE
Fixing capitalism
One phone at a time

This topic will be pinned until Oct, 31.

Hi, my answer from the helpdesk came yesterday. So I guess my ‘quite’ period is over. It was a very kind and friendly answer, but a single question was answered. He only referred to the latest blog posts. So I assume they just cannot answer my questions right now because they don’t know themselves. That’s okay, let’s see if they can in the future.

Here is the picture I wanted to post here before, I hope you like it. I can provide changes or .svg files or what ever is needed. The fonts are free fonts, the licenses look okay to me. (Fonts used quickly with no kerning or any microtypo: Google Roboto and Heart Breaking Bad font):

Update:
I wanted to upload the .svg, but svg uploads are not supported here

Whoa! Really love this! Will have a go at making a mock-up myself sometime soon.
Did you peeps already see our new T-shirt design? Here is a picture of me wearing it in Berlin: 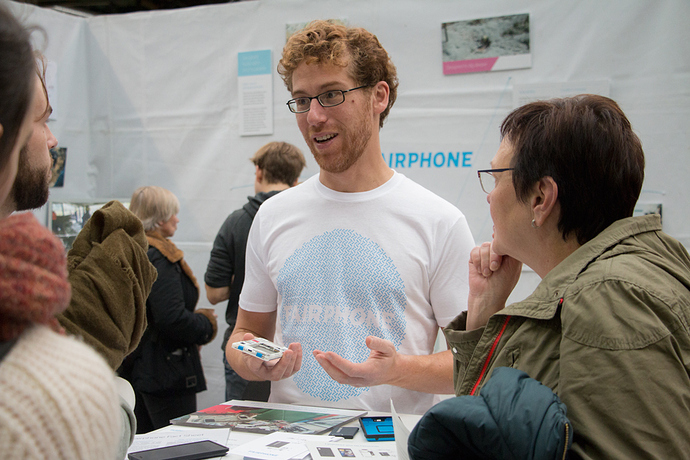 Did you peeps already see our new T-shirt design?

Yeah, Daria and Laura brought them to Vienna. To be honest, my first reaction was: “Uh, that’s ugly!”…

@Stefan sometimes you really remind me of ultraconservative elderly people who hate any kind of change!

Yeah, I dislike white t-shirts. Also I expected something with a message (not just the not-logo…)

Very awesome, I love the t-shirt

actually I think the t-shirt has a very nice subtle message; it is hard to see on this picture, but the blue circle is made of hundreds of small screws.

But as goes to show; it is hard to argue about taste. All the more reason to continue on a community designed t-shirt!

I noticed the screws. Would like to know how a blue shirt with white screws would look like…

My initial reaction to the white shirt which Douwe was so kind to provide me with for our latest Aachen meet-up isn’t completely enthusiastic either, but I don’t want to give an ultimate verdict yet. What I do want to say is that, as Douwe said, it is quite subtle – which makes it the opposite of the previous shirt which was (is?) quite bold, both in terms of hue and the contrasting stark letters. I can imagine some fans and some Fairphone staff might have found the blue one too “in your face”, so it is good when there is an alternative option. But I think both options should be there – in other words, please keep the bold blue shirt in print … too

I am sure I am not the first one who has had this idea for some time, but given I had nothing better to do this friday night (well, I would not call the dish-washing that is threatening me “better” … ) I thought I’d finally visualize it. Be forgiving, I know it’s not the most elaborate rendering, but I just wanted to put it out before it’s never brought up at all. There is definitely someone out there who could make this much more professionally. Again, I’m sure others have had this idea, too. Older folks, please stay away from Commodore-64 jokes.

I like it a lot. The FP1 in there is also a nice idea. Not sure how well all the fine details will work on a shirt, but font-wise it looks perfect! Maybe it’s a good idea for a postcard as well?

There is no FP1 in there. If you look closely, you’ll see that it’s the FP2.

Very nice work! I think this should definitely be seen by @Douwe

Oh, very nice indeed! Which source did you use for the images? iFixit?
And am I wrong, or have you been cheatin’ a little when making the ‘P’?