I just got the security update for September 2019.

Does anyone have any idea what those battery charging improvements are? The camera UX update fixed a bug for me where the app would crash if I filmed a video and touched the screen at the same time. 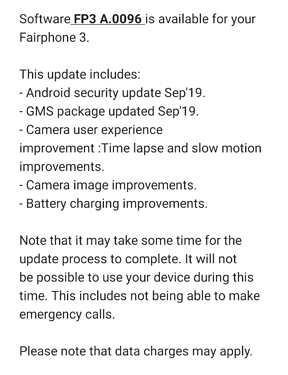 Not sure about the battery stuff, but it’s improved the camera for sure.

The latter modes are available after the security update.
However Video Stabilization is still greyed out at my FP3

It’s not available for 4k video quality, but it is for Full HD 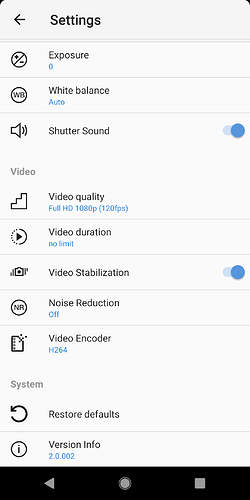 Speaking of the camera video setting: what encoding setting should I use and what’s the advantage of each? What about the noise reduction setting?

In the store, it sais:

Has anyone tried the slow-motion videos at 1080p with 120fps? These are really good news for me

Speaking of the camera video setting: what encoding setting should I use and what’s the advantage of each? What about the noise reduction setting?

I don’t have the FP3 yet, so I don’t know which are the different encoder settings (can anyone tell us which options can you select in this setting?), but it probably refers mainly to the compression. H264 has a very good relationship betwen final video file size and quality (it compresses the video like a JPEG does for PNG or RAW photos or like a MP3 does for a WAV audio file, do you understand?

YES!!! This means I should theoretically be able to grab the update zip file and patch the boot image to root the phone!

(can anyone tell us which options can you select in this setting?)

FP3 is capable of 1080p @ 120 fps as examined in this post: (Problems with the flash in default Camera app)
At a first glance the new modes worked

Did you succeed? (I’m still waiting for mine, and hope to be able to do this this way)

I managed to get the update URL but it only contains a bsdiff (BSDF2) of the boot.img, so no full boot.img. But maybe it will be in one of the upcoming releases/otas.

For the devs who try to port alternative software this would be good anyway, i think

Haven’t received update on my device (FP3). Do you think it was normal ?

How way to receive update on fairphone ?

Thank you in advance

You can check for updates in Settings > System > Advanced > System Update.

There are others though that have indicated that they are not getting an update through. There is no information from Fairphone about the update etc, so we can only speculate, and it may be that the update is being rolled out in stages, or it has been pulled altogether.

Helpfully, this info is also available when on the System Update screen - it shows the security patch level

nope, haven’t actually got the update yet, i’m unsure if you need root to access the zip file in the first place.

Maybe, but the question is whether you can download it with other means if you have the url

Do NOT flash those files directly: FP3 September OTA: https://android.googleapis.com/packages/ota-api/fairphone_fp3_fp3/39ce8b1b568149d8ecb8b4b7fc0d37beefc388fb.zip

There is a META-INF/com/android/metadata file in the updates which indicates that both are incremental updates to version 8901.2.A.0096.20191001 but for two different build versions:

Both packages only contain a BROTLI_BSDIFF (type 10) for the boot.img.

(My phone with A.0095 preinstalled was dispatched at the beginning of November)