Screen get blurred or black when answering or unlocking (not crashing)

When i get an incoming call, most often the display is just a mess of individually coloured pixels, like on old television without signal but in RGB. Sometimes it is also tiled. Sometimes there are portions of a normal display, but heavily overlapped with different types of squares. I have also seen some parts of what should be there, mirrored. 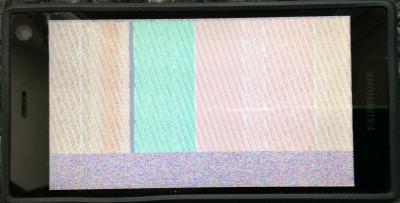 I believe that in that case also the touch function is not working, i have never succeeded to answer it “in blind”.

I can press the top left physical switch and display turn black, and it usually works to wait a few seconds then clicking again to get a normal screen, but mostly it requires several trials so i miss most of calls…

When i have no incoming calls it mostly works OK, but sometimes when i click the top left physical button, the screen just flickers and get black, sometimes it looks somewhat like described above when answering a call. But here i can swipe up and hear a “plopp” like it got unlocked so touch works, but screen is black.

This started about three weeks ago. Seem not related to an update - former update was earlier IIRC, and the last update did not change this.

I have never seen screen go bad once it gets displayed OK initially; it is sometimes (seldom) go bad when waking it, once in three weeks when morning alarm goes on, but when answering a call it MOST OFTEN go bad.

I have dissassembled and wiped the screen contacts with a coarse paper towel, no change.

The closest similar report i have found is this, but it is over 9 months old: Weird screen behavior, fairPhone2 now unusable

Display is acting up / snow and stripes

There might be an easy solution to this problem:

We would like to ask you to remove the screen of your phone and putting it back on to see if this helps solving the issue. See how you can easily do this by watching our video on how to replace the screen;

As you tried that, and it didn’t help:

If it does not solve your issue, get in touch with our trusty support team with the Subject: “Display is acting up” or “Display shows snow and stripes”.

Wow support is really quick :).
I will send the phone in, already got an RMA.