I noticed a problem with my FP2. I don’t know if it’s related to the flickering problem but it seems different, hence a new topic.
After a few minutes of use, the screen gets blurry and then ligth colored lines appear on most of its surface. It’s still possible to read but it’s uncomfortable. If I close the screen (or let it go to sleep) and open it again, it’s back to normal, for a few minutes only. I tried to toggle brightness, adaptative on or off, but it doesn’t seem to help.
I took a screenshot, but the problem is not visible on it.

I’ll take a picture of the “phenomenon” tomorrow with a camera.

Any idea of what the problem is and how to fix it?
Thanks,

Since nobody else described this phenomenon before I moved this topic into #fairphone2help for now.

Have you tried disassembling and reassembling your screen?

I did took the screen away, to see if the connexions were not “dirty”, but it didn’t help. (By the way, I find very difficult to detach the screen, but that’s probably me-clumsy-and-scared-to-do-damage)
Here’s the picture:
http://postimg.org/image/kls2qgvhp/
The vertical lines are thin and bluish on this picture. They’re the most visible on the left and in the middle of the screen.

Just to calm you: it is quite difficult to dissemble the screen. When I first tried it, it took me some minutes too. When I did it for a second time, it was already easier.

On your picture the lines look like the ones discussed in this thread:

To me it looks like a defective screen. Contact Fairphone support and provide them some pictures. Try to capture the defects from different angles and with different display contents.

I’m note sure it’s the same problem than the one with the camera; mine appears on the screen whatever I’m doing and stays there.
I took more picture of my screen and I’ll contact support about it.

Hey Pascaline, this is just to write that I have similar issues:

I have discovered my FP black/dead a couple of times, even though battery charge was plenty full, and then I could restart it, sometimes immediately, sometimes pressing power button didn’t do anything until i tried 10 mins later.

However today I experienced the phone slowing down while using an app, then a pink line appeared on the top of the screen…The touch screen stopped reacting. At some point I had additional weird effects: The display split diagonally and one half was turned by 90 degrees At some point, after pressing the power button and then waking the phone from black, there was the lock screen, and it behaved normally. During that process, which lasted abour 3 minutes, I noticed that the phone heated up, so it must have been using the CPU for something, god knows what, it definitely wasn’t an app that I launched…

Very strange. I also had discovered my phone sometimes waking up to a colorful static covering the whole screen. The phone wouldn’t be responsive for about 10 minutes, then i could restart it.

Seems you have a pretty serious issue too.
For the record, I had to send my phone back to support, and they gave me a new one. Now I’m experiencing the random reboot problem with that one (FP2 random reboots - see #rebootsguide for help). I’m unlucky

Hey Pascaline, I don’t want to get send it back for replacement as it seems the replacedment phones are even worse sometimes, with this random reboot problem. It’s crazy you can send back a retail product and the replacement you get is even worse. I’m quite disappointed in Fairphone at this point.

For the record: I removed the screen of my phone and put it back and afterwards I had 3 days without massive problems, so maybe it was a slighly unaligned screen and some short-cirucit on the connecting pins. Anyway, right now my phone has just turned off and is now stuck at the boot sequence, showing “FAIRPHONE - Powered by Android” but not continuing for about 10 minutes now…I rebooted it but it is still stuck at the same stage. Blergh, I am fed up. It’s still better than what usually happens to my phone (see pic) 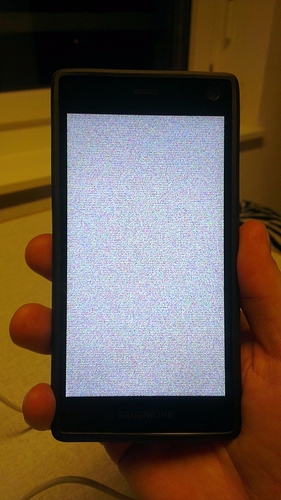 This sounds like fastboot mode to me. Maybe you held erratically the volume down button while pressing the power button or the volume button got stuck when you put the back cover on.

Hi Irina. Can you explain? What’s fastboot mode and how would it have an impact? The fact that the phone is highly unstable, restarts randomly, gets stuck at boot and often doesn’t even get that far (it is just dead for 10 mins or so, after which I can revive it), and the display showing crazy artefacts during normal usage at times is hardly related to user manipulation. The volume button seems to work perfectly, nothing stuck, it turns volume up when I press up, and down when I press down…Still I’d be happy if you could clarify fastboot…

Well, fastboot is an advanced mode to configure your phone via PC (for rooting etc.). If you boot your phone in that mode, you’ll only see the black screen with the Fairphone logo. That’s why I thought you maybe entered it by accident. To get out of this mode, just reboot your phone.