I experience a strange bug - random but recurring app freezes when scrolling/reading articles or timelines like Facebook in the browser (opera, brave, …). Also occasionally in the twitter app. Sometimes showing a pop-up notification that the app currently is unresponsive; with the options to wait or quit.

I searched the forum and nobody else has reported it so far, which is good for all of you, but makes it even harder to understand why it is happening to me.

Any help or hints of the community are much appreciated! Thanks in advance for taking the time to read this bug report and thinking about some sort of way forward.

ps. I have not tinkered at all with the phone. Software wise I only installed a few apps and use a different launcher (Nova Launcher). That’s about it. 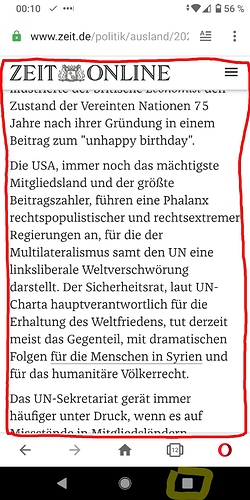 Did you check the thread about FP3 touchscreen experiences ghost inputs? It’s not android 10 specifically, nor exactly the same problem as you, but you may find valuable advice.

That affected area looks like something that might be handled by Android’s built-in webview component. “Built-in” in the sense that it comes with the OS, but it’s updatable on it’s own (look for “Android system webview” in Google Play store). Make sure you have the latest updates installed for it.

I haven’t experienced ghost inputs - made the things suggested in the thread (screen test works out fine), but found another thread where people reported freezes. I asked them what they ended up doing.

The Android system webview sounds veeeeery promising. I have uninstalled the most recent version, restarted the phone, installed the most recent version again, restarted the phone again and have been scrolling to make it happen again. Unfortunately still happens :((((
I have now cleared the cache and the storage of the webview app and will test again.

ps. I found a lot of people reporting screen freezes and crashes due to android system webview scattered around the internet. Their descriptions sound alot like mine. so this is probably it. Also Opera and Brave are based on Chrome. so that makes a lot of sense. I will try to switch to Firefox in between and see what happens there. But I am still wondering why this happens on only a few devices (given that the other thread is indeed also connected to the webview app) and not on more… but if a factory reset, un/install of webview and clearing cache/storage doesn’t work I think I have to contact support on this

I have now made the drastic decision to make another factory reset. Additionally I then disassembled the phone, cleaned as best as I could and assembled again. In the first hour after that everything works as expected. Let’s hope and see if this continues…

Unfortunately that was just coincidence/luck. It has been back ever since. I have been in touch with Fairphone support, and after reproducing the bug in safe mode they told me to send it to the repair centre. I made many videos of the freeze and hope that the repair centre will really try to repair it (unlike many stories I heard.)

I’m glad I found this! I got my FP3+ last week and even before I put in my sim and SD cards, I’ve had this same issue, ironically even while scrolling through this thread. I thought it might somehow fix itself but you having to send it in doesn’t sound very promising. I’m now using safe mode to see if I can reproduce it because I’ve been suspicious of my Twilight screen dimming app.
Have you heard back from support yet?

Hi,
I have a fairphone 3+ and I am experiencing the exact same bug…
Any updates on your side ?
This is really an annoying bug…

Same here on a fairphone 3. Any news ?

Same here also. Never happend on Android 9 and I have upgraded just about two weeks ago.

Has anyone here, except @rainer_zufall, ever reported this bug?

at least for me it is too little of an issue to be reported, maybe others think the same way

As you want, but be aware that reporting an issue is always the best thing to do. Indeed, the more data FP will have, the better they will manage to solve the issue.
Even a small issue should be reported.

I’ve been having this issue since upgrading to Android 10 last year, and it seems even more frequent since the last update a few days ago.

It never happens in Firefox, only Chrome and apps using the embedded webview. It just happened while reading this thread. Subjectively, it seems more likely to happen on long pages, but it might just be that it’s caused by scrolling and long pages require more scrolling.

After pressing the square and going back to the app it seems that any clicks or scrolls done while the screen was frozen have actually taken effect, it’s just the UI didn’t redraw to show those changes.

I also used to get ghost touches, but this is different.

Sorry to dip in despite the fact that I don’t own a Fairphone. I own a Samsung Galaxy A31, but I believe to be having the same issue.

Sometimes, when I am browsing on Chrome or the WebView, the page Im in becomes irresponsible to touch, couldn’t drag, scroll or click. But it’s only the page. The browser interface works normally, as the notification bar and the bottom Android bar.

So, as soon as I interact with any part of the screen that is not the page, all the touch interactions I did with the page execute at once, as if they were cached or the page was not rendering until that point.

Sorry if I get it wrong or our issues are not related. Cheers!

I had the same problem. FP did send me a new screen, since than it never happened again.

Howdy, just a quick update to mention that I have the same issue.

Happens with Chromium, Brave and Bromite, all based on Chromium, but never on Firefox for example.

Some random guy on plebbit mentioned how switching the ignore-gpu-blocklist flag helped in his case but to no avail for me.

Hope we’ll get answers on that, it seems like it has been happening for almost a year now.

I’m having the exact same issue. Are there any updates on the topic?

I had the same problem. FP did send me a new screen, since than it never happened again.

Given the above it seems a bit odd that, in one instance, a screen replacement resolves what appears to be a software issue, so maybe it was a contact issue.

Have any of the above tried removing and replacing the screen to check it’s seated ok?

Ridiculous… I have two accs with T-Mobile, one with an android 10 and the other with an old windows phone…I would burn the android 10 in a second… To many problems on the other hand my windows phone works like an eternal machine… Never had a problems with it… The downfall… The apps… Very tired of that freezen screen with the android phone