For the 3rd time now, the entries in the quick access menu (edge swipe) are gone directly after booting.

I just reset the battery before.

This happened to me too sometimes, back when I was using the Fairphone launcher. Do the apps come back when you reboot again, after seeing this behaviour?

Thanks. I didn’t try that yet.

Hi, i have the same issue.
In my case it works when the app i installed on the internal storage. if i move the app to the telephone storage, on the next boot the link is gone. is there a way to fix this? Maybe load the widget later.
Thanks

You should do the unified storage upgrade.
But make a backup first! And remember that the preinstalled backup app doesn’t save all data.

Awesome, Thanks a Lot!

I already have 1.8. I rather wait for the next official update.

I’ve run into a quite annoying bug. Once a day I lose all my apps in the quick access panel. It happens if I close an app (different apps every time) or if I’m unlocking it. I can’t trick them to come back by rebooting the device and I had this problem both before and after I reinstalled the phone. Have someone had the same problem and solved it? 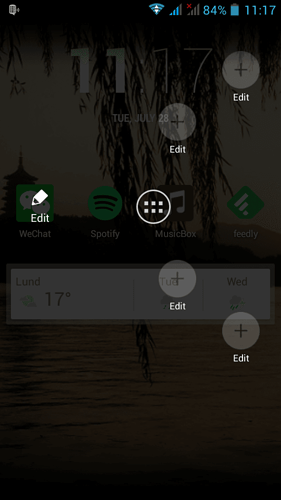 I reopened this topic and moved your post here as it deals with the same issue.
@gunnar, @Arnd did one of you ever solve this problem?

PS: Is it connected to automatic shutdowns for one of you?

Dear folks, I'm using the automatic switch off function of the fairphone but unfortunatly when turning it on again some of the apps (whats app / the last app on this quick access menue) are missing. Has anyone any suggestions how to solve the problem?

It is not connected to the automatic shutdown, as I’m not using that feature.

Hi, i did forget to reply here. the Unified Storage update did solve my problem.
Sometimes when certain apps update they are gone, but i think this ist from the update process since it always the same app. Not a problem for me.
Thanks again for your help.
gunnar

I did not exactly solve it, it just did not happen again so far. In my case, this appeared only after booting.

@paulakreuzer, it’s cool you appear to have all those little bugs still on your mind so you can reopen the respective threads

From time to time it also happens to me - like today!
I have no clue, which action did provoke it this time.
I have installed the unified storag upgrade some weeks ago (–>FPOS 1.8.5), but I can’t say if it is better, worse or equal than before.
I do not use automatic shut-off anymore (just manual flight-mode in the night).

Any ideas? It is not that big deal to re-set the 5 icons…but obviously it is a bug…and should be solved.

but obviously it is a bug

I agree it’s strange, but as long as we don’t know what provokes this - and it can be reproduced - I don’t think we can file it as a bug. I don’t think the FP team can fix a problem they can’t reproduce.

Since I updated to the latest version (Kola Nut 1.8.5) , quick access apps disappear every time I update apps in Google Play.

Maybe something went wrong during the update. Have you tried a fresh installation of Fairphone OS 1.8.5? You can either do this in the “Advanced Mode” of the Fairphone Updater (Fairphone for Android > Current Version > Install) or manually.

Does this solve your issue?

IIRC quick access apps disappear if apps are installed on or moved to a removeable SD card. They must be installed in the FP’s internal storage.