The bookmarks are saved as “app user data” which goes together with “app settings” and was unfortunately not backed up by the backup-app.

So which are the bookmarks / Lesezeichen specifically mentioned as item for back-up? 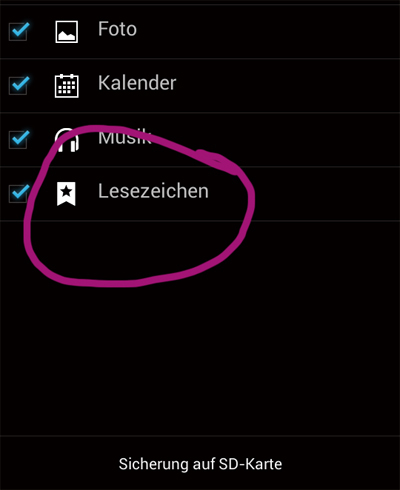 So which are the bookmarks / Lesezeichen specifically mentioned as item for back-up?

Maybe the backup app really has problems with restoring because of the different partition layout now (as @therob suggested here. In which folder shoud they be stored anyway (can’t find them on my phone)?

[Where Android apps store data?][1] explaines it online.
For me and my old android on my old phone following directories/files exist:

I’m too lazy right now to look into them but if I had to backup my phone I would take these with me
(you need to grant your file explorer root access to find those files)
[1]: http://android.stackexchange.com/questions/47924/where-android-apps-store-data

It also means that the app will be different in FP2.

how likely is an update of the app for FP1?

Thinking about the FP2, I’d first wait and see whether the FP2 will have a backup app by default. All I meant was that if the code is contributed by MediaTek, it will not be part of the FP2 as it uses a Qualcomm SoC. I can’t predict that a backup app will be included for the FP2 at all. If there is one and it is developed by Fairphone itself, it may or may not be compatible with the FP1. If it is code from Qualcomm, chances are it is not compatible with the FP1 or that it cannot legally distributed for the FP1. Overall I’d say the chances are pretty slim that this app will replaced or updated.

Seeing as this is something that can be worked around, and multiple alternatives exist, I hope the fairphone devs are concentrating on fixing issues that can’t be remedied by users themselves. I’d sooner suggest removing the app altogether and providing suggestions on where to find a better one (if required), than trying to fix it.

3 posts were split to a new topic: Dd / nandroid backup for FP1(U)

Just an update on the problem situation:
unfortunately it’s still not all back to normal.

for example:
my individual mp3 ringtone for the alarm changes back automatically every other day to the standard sound (Cesium)
the syncing of contacts between FP and posteo https://posteo.de/ deletes contacts and info from time to time (did not do so before these problems started), i.e. contacts I had entered online in posteo are now only on the FP and I cannot sync them back. Sometimes data within one contact disappears (e.g. one of more than one email addresses).
contact images disappear online (where I entered them).
tasks: a week ago syncing tasks between FP and thunderbird (via posteo / DAvdroid) stopped. syncing of calendar and contacts (with slight mistakes) is still happening. (I will write this also in the task-topic)
the syncing between FP posteo and thunderbird with calendar contacts and tasks had worked nicely before. now there is some sort of bug in it.
the automatic switch off switch on does not work like before. i.e. it is ok if the FP switches off automatically. But if I prolong the on-time and switch it off manually, then it does not turn on automatically in the morning (but did so before).
when I use the FP1 as USB-device and connect it to PC I only see the SD-storage. when I use it as media device then I can see both storages but not all folders. (e.g. I created a folder on the SD - which had been there before actually but somehow disappeared? - for the opencamera photos. I can see this new folder (subfolder to DCIM) when FP is usb-device but not when it is connected as media device.
So I think I see al data on SD-card via USB-device, and some from SD and internal via media device, but have no way of seeing all data on internal. (which means I cannot do a manual backup of all data to PC)
I have now deleted the back-ups from the SD card, so finally the music players don’t play music from there any more (which was quite extraordinary). And now I will start putting music back on the SD cards and create playlists.

So it is nice to have managed the storage upgrader business, but so many things are not up to before-standard and that is a bit awkward.
Maybe others have / will experience/d similar phenomena, that’s why I wrote it down like this again today.

All of these nasty issues sound like some system malfunction. Have you tried installing the system again?

Sometimes updater files get corrupted during download and then cause problems after installing. It's worth running the update again in these cases. To do so, go to Updater app > Enter the advanced mode > Android for Fairphone > Latest version > Install If the update does not work