Problem with NFC and AusweisApp2

recently (this week) I have permanent problem using the AusweisApp2 with my fairphone3 (before I always got it working within a few tries). The AusweisApp recognizes my ID (so NFC is working in general) but has a problem when reading data from the ID. It seems the NFC connection is not stable. 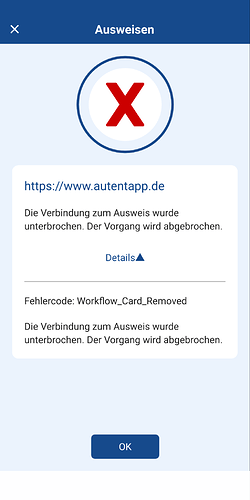 Last time I successfully used the AusweisApp was in August.
Have any of you experienced this problem? Do you know of any changes regarding NFC since August?

Hi Chrojobe and welcome to the community and the forum.

Problems with NFC were reported after a FPOS update, see post 9 for example.

Hi OldRoutard
Thank you for your response.
I already found the report of the similar problem before. The error is a little different though. My phone passes the test done there but has problems when reading more information via NFC.
But I saw in a lineage thread other people reporting the specific of me. I have android though.

Last time I successfully used the AusweisApp was in August

Well, if a few weeks ago you installed the update signalled in the first link of my previous post ( Software Update: 8901.4.A.0016.6) then I would strongly suspect that your current problems are consequential to that update, and therefore I would recommend waiting for a correction patch which, I would think, is likely to be offered soon.

Have you contacted official support about this? If not, you should.
A patch has already been offered to a user for a medical application.

To check which version you are running, go to
Settings > About phone > Build number

I have android though

Lineage OS is Android too, I won’t go into the differences here, but the fact that Lineage users are experiencing similar problems may help in tracking down the exact origin of the problem (if it’s the same problem …)
@gabrieleb This might be of interest.

Isn’t the antenna in the back cover?
I would check the connection if the problem is sporadic.

If you want, I can add you to the list of users who are testing a fix for NFC. Otherwise, you can wait until the next official release.
If you want to try the fix, please send me a private message with your IMEI.

If it is not a blocking issue for you, I would wait for the release.

@OldRoutard
Thank you again for the information. Good to have the link to reach out official support. Hopefully I don’t need it

@gabrieleb
Thank you, too for offering to try out a fix. At the moment it is not urgent. I can wait for the official release and probably longer. If it is not fixed with it, I will reach out again.

Any news on this topic as I still have the issue.

Do you have the latest version installed?

Hi everyone, A new software update for Fairphone 3 and Fairphone 3+ users is available. Software Version: 8901.4.A.0017.3-gms-15368f27 Security Patch Level: 5th of October, 2022 Update Size: 34.64 MB List of changes: Fixed an issue that was causing, when upgrading from Android 9 directly to Android 11, some Bluetooth remote controls not working properly anymore. Fixed an issue that was causing the phone not to be able to communicate correctly with certain glucose monitoring devices via NF…