Poll: Where do you see yourself on the leftist spectrum?

Since the first poll from 2 years ago showed about 97% of us are leftists I want to dig deeper now.

I recently found leftvalues.github.io which asks you 72 questions to help determine where you stand on the socialist spectrum.
After you went through the questions the site tells you which ideology it thinks you align with most closely. It also gives a brief description of all ideologies.
Below please choose the ideology you think you align with the most, which is not necessarily the result of the quiz.

You can participate in the poll anonymously. If you want to you can share what you voted or your results from the github quiz below. Also the rules from the first poll still apply:

Poll: Where do you see yourself on the political spectrum?

Warning: Please don’t belittle anybody else’s political views. If this topic degenerates into a fight I’ll take appropriate action immediately. It’s probably best if everybody just describes their own views and only comments those of others if they agree.

If you don’t find yourself on that spectrum at all maybe the first poll, which is still open is better suited for you.

Now below tell us where you stand on each individual leftist value. Again choose where you really think you stand over your quiz results.

To me the quiz suggested Democratic Socialism followed by Eco-Marxism: 91.4%, Council Communism: 88.2% and Eco-Anarchism: 86.6%. I chose the latter in the poll above because the description fits my values the most.

These are the quiz results for my values, which seem pretty accurate: 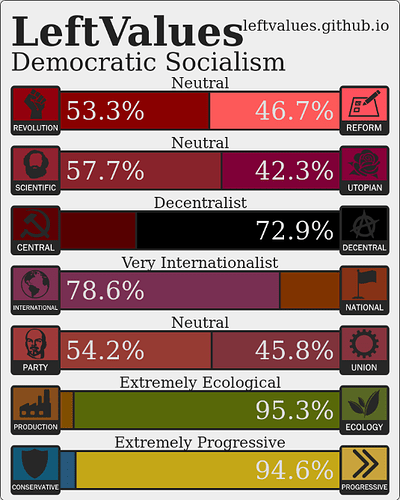 I just go into full “ah but what do you mean by x” mode with about half of these questions.

I end up coming off less ecological and more nationalist than I am because of the vague phrasing. Like the question of whether some destruction of nature is acceptable if it significantly benefits humanity; destruction needs to be quantified and qualified, as do some and significantly. And taking into account that in the end, what benefits the planet benefits humanity… these questions are difficult to answer with an ‘agree’ or ‘disagree’.

Not really a knock on the quiz, I guess many of these issues may just be impossible to sum up into single questions.

Half the questions assume I desire a socialist state

? I don’t like thinking in terms of left and right, or anti-capitalist; instead of the latter I prefer the term alternative-capitalist. The continuous repeating of socialist state in the questions is leading the questionnaire into an outcome.

This was my outcome: 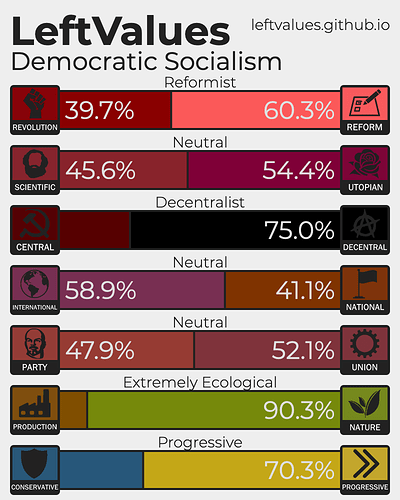 I don’t even get the party vs union scale, nor the scientific vs utopian scale. What does it mean when you are utopian?

Also there were some questions about ethnic identity which I guess were counted under national?

I already knew that I’m a rather boring lefty. No extreme tendencies.

Some of those obviously Marxist slogans seem abhorrent to me - not that I had to suffer from totalitarian communism (with the GDR being a police state), I’m too young for that, but I still see its remains and the scars it left in people, nature and infrastructure. Oppression shouldn’t be a lefty’s goal in my opinion - there are others for that.

I come close to 50% for many categories. The web site then goes on to call me a centrist marxist for no clear reason. I apparently misinterpreted some questions that were communist propaganda.

I think for all of you who don’t really see yourself represented by the results the answers “Social Democracy” or “Other” are most relevant in the poll above.

This is leftist jargon - utopian socialism usually refers to the kind of socialist ideology that was most common before philosophers like Marx got into the game, at which point we start seeing a more intellectual, “scientific” socialism. It’s the word “science” being used in the old-fashioned way, like with “the science of Marxism-Leninism” and “the sweetest science”.

Same for party versus union: these are terms used to distinguish centralised, party-based socialism from decentralised, worker-led socialism, respectively.

Considering the prevalent jargon and the fact that the farthest right outcome is “socialist democrat,” I rather think this is a quiz to figure out what type of socialist one is, not if one is a socialist.

I have no big problem with the poll. You do not need to be left-wing and can still be counted by voting anonymously in the previous political poll Paula created if you feel like it.

Regarding my own voting, here’s my breakdown: 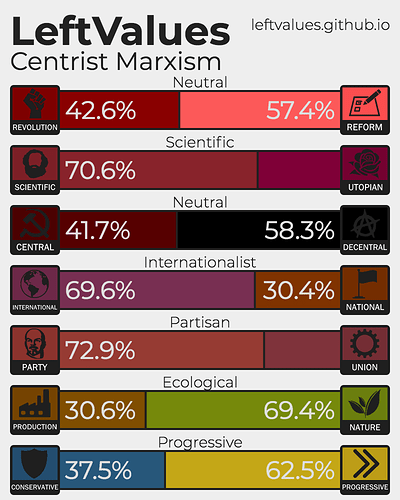 While my personal voting’s automatic classification was “Centrist Marxism” (see above), I voted “Eco-Marxism” here in this topic. I never had much trust in anarcho-syndicalism (to me it eventually boils down to social darwinism) which probably explains why I ended up quite partisan on the scale. Nevertheless I quit the Social Democratic party last year (mostly for ecological reasons), but I remain convinced that joining a political party is essential to really keep a democracy alive. I currently find myself in equidistance to Social Democrats and Greens.

I’m for the degrowth.
Don’t know which of those flavors of left are for degrowth, though. Can you help me ?

From a quick research on Wikipedia I’d say degrowth is most linked to eco-anarchism, but what does the quiz suggest for you?

Most flavours of anarchism will ring your bell, then. While I don’t like to use the term ‘eco-anarchism’ as it doesn’t actually describe a leftist tendency but rather any form of anarchism (usually syndicalism) with an emphasis on certain ecological issues, that descriptor will probably suit you.

I can recommend The conquest of bread by Pyotr Kropotkin, which describes degrowth though it was written seventy years before the word was invented. It’s a good primer on anarchism, quite short, fairly dense but very easy to get through.

Those are my results, democratic socialism seems to “win”, but others like “Market Anarchism” gets as much as 99% match, kind of strange isn’t it. 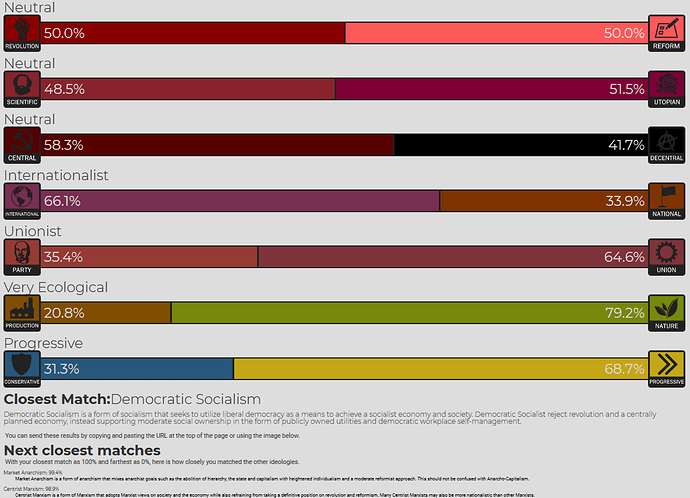 Interesting, I always thought that democratic institutions could make the degrowth transition socially sustainable (it probably explains my 51% utopian trait). Many thanks for the book recommendation, will go through it for sure!

but others like “Market Anarchism” gets as much as 99% match, kind of strange isn’t it.

That differs per person. If you got 99% match with another, I’d go for that as well as the difference could literally be one question answered different. I’d take the questionnaire with a huge grain of salt anyway. 1) some questions are up for interpretation 2) it keeps talking about a “socialist state” (which for many anarchists is a no-no if they prefer e.g. no state) 3) Talk is easy. It does not look at the ‘walk’ ie. it only looks at how you’d deal with situations theoretically; not based on empirical data from the real world.

Since there is currently a discussion going on about extremism I retook this test to see how much of an extremist I am.
I am an extremist anarchist, which didn’t surprise me and I’m also extremely ecological and progressive if you account for disagreements between me and the creators of the test about which answer is the more ecological or progressive one.

“Anarchism is a political philosophy and movement that rejects all involuntary, coercive forms of hierarchy. It radically calls for the abolition of the state which it holds to be undesirable, unnecessary, and harmful.”