📊 POLL: How satisfied or unsatisfied are you with your FP4?

I voted satisfied. In general I’m very happy with it and I can see myself keeping it for a long time.

I only have three areas where I’m disappointed:

But overall I have a reliable phone and I would not change it.

Android 12 will provide one hand mode, which makes the size more manageable.

Unfortunately that isn’t going to solve 99% of the problems I have with the size, such as the weight distribution, the physical width of the device in hand, or the discomfort in my trouser pockets. But I accept it would allow me to use the device one-handed, which I can’t currently without accidental touches.

To be fair I do use the official case which adds some bulk.

I voted very unsatisfied. I’ve been using FP4 since April 2022. I would return it if I could, or give it to some friend, but of course, people would laugh when they saw this brick. There are multiple reasons, starting from non-existent software support (where’s the Android 12-13? and I’m still on Sept 2022 security update), the potato camera, random reboots (seems to be related to roaming and SIM/operator combo), no headphone jack, weight, shape, lack of accessories, eSIM, operator support (I don’t have VoLTE or 5G working despite my operator supporting it), overall cheep feeling of the device, despite the price. The list goes on. Just to be clear, I’m on stock firmware, not rooted and with a locked bootloader.

Here’s my review on Amazon: Amazon.de

Edit: re-reading my review, I’m considering putting this phone in a drawer and getting something modern and supported. So much for sustainability.

And I’m sure the list does go on, but clearly your experience is just that, yours.

My daughter seems happy with hers, I have 2 FP3s. And although akin to you in that I would not recommend a Fairphone to anyone other that a Fair Trade Freak I wouldn’t give it a bad review as that just seems a waste of more resources.

On the matter of wasted resources, putting in a draw is a great example of waste.

You could advertise it here and get some funds for a new phone. You may even get enough to cover a new one.

Giving it to a friend I agree, would be embarrassing, I wouldn’t do that even with one of my seemingly perfect FP3s but I’m sure I could find someone that would appreciate your FP4

All the best and that for pouring out your heart

My daughter seems happy with hers

Please, stop with this one liner that makes no sense in the context discussed. This starts to become embarrassing, so many people have issues with this phone. You cannot tell everyone that your daughter is happy with the phone and others should be as well. What @Jorge lists are issues everyone can reproduce. Granted, some of them were known in advance such as the headphone jack.

But updates delayed for such a long period may not brick your phone, but for sure are a huge security issue. An example: 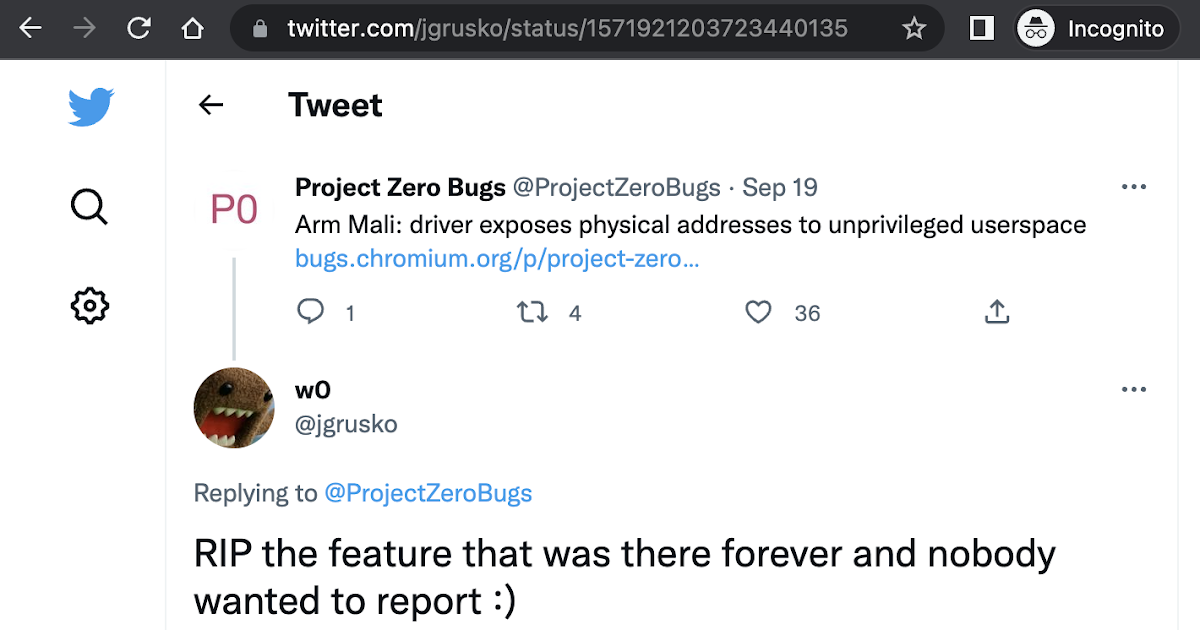 By Ian Beer, Project Zero Note: The vulnerabilities discussed in this blog post (CVE-2022-33917) are fixed by the upstream vendor, but...

These issues need to be addressed. For some this phone may not be worth more than a brick indeed due to FP failing to fix them. It’s been a year. Surely we can expect improvements, even the small issues like the jumping arrows hasn’t been fixed. Instead, they add another notification bar issue by not testing their landscape change which now cuts of icons.

FP needs to hear this feedback and should not be sugarcoated or downplayed. Otherwise they will never improve their products. This feedback is intended to make these devices more usable during our day to day tasks. We know it’s not an iPhone. But we did pay good money for it, it should also be fair for the end user.

This starts to become embarrassing, so many people have issues with this phone.

Sure it must be embarrasing for some, it is for me and I don’t even have one. Just reading it is not pleasant, but as I said not everyone will have the same experience. Maybe I’ll ask my daughter to post a comment, but you may know how it is ~ those with no problems don’t often visit the forum, if ever.

As for ‘good’ money, there’s no such thing in my opinion but where it is used does show something about the user.

Jorge can complain if he feels so but some of his complaints were known before buying the phone. In that, I follow Amoun. And in the same way somebody can be disappointed, somebody else can be satisfied.

My experience with Fairphone is that monthly security updates slow down when we get closer to an upgrade release. I think people in charge of the security updates go and help for the Android upgrade.

Since the hardware receives no update quite fast, I don’t think a stupid Fairphone is a good investment in terms of security. Which also is known since the FP1.

Weird, I didn’t read the whole thread, however I must say, reading of all the issues, I don’t have ONE of those mentioned by different people.

I can complain about the weight, or the fingerprint sensor position (I really find it difficult both to use it and to avoid it!), but for the rest, my FP4 is perfect.

Quite generic advice, but I suggest to those who have issues to also try to monitor apps in the same way.

Just my 2 cents here, from a satisfied customer.

Maybe you should explain us how to monitor our installed apps ? It could be helpful for many.

Ah, yes, we’re holding it wrong. It must be my banking app (Rabobank, Dutch) that prevents VoLTE from being enabled for one of the SIMs, bad camera and microphone quality, slow software updates and reboots when I enable data on my eSIM (KPN, also Dutch) when roaming in some countries. You nailed it, mate. You’re a software developer, you know better.

For everybody else saying some thing were obvious before buying, like the lack of a headphone jack or size and weight. Yes, however a crappy camera and microphone is not something I could have possibly imagined on a 2021 phone, as I used much cheaper phones where both worked much better. In fact this is the first phone since the early 00s that people complain about not hearing me. And the camera is embarrassing. I don’t expect much from a phone in terms of IQ or dynamic range, but this is barely serviceable.

Personally most of my issues have been with the software:

Poor photos in anything but daylight, around 12 percent battery being drained every night even with nothing obvious being run in the background and the, let’s call it interesting bugs that never seem to get fixed.

In a WhatsApp call when out in direct sunlight? Your screen is now unusable.

My app icons keep resetting on Nova. I have one icon for my girlfriend and one for a group chat for WhatsApp and they disappear when I restart the phone. I don’t know why.

Some apps are sluggish even though they aren’t on my girlfriend’s Samsung A52s.

Gcam has superior camera quality compared to the stock app, but the total lack of Camera2 and CameraX support means the Gcam can’t access all the camera features. So do I want higher resolution pictures using the stock app or better quality pictures using Gcam? I wish I didn’t have to make that decision.

There’s a weird issue with the line at the bottom of the screen when you have touch controls enabled. Sometimes it gets stuck on the left side of the screen.

And last but not least, the default Launcher is terrible. There are better FOSS launchers available. Fork one of them and use that instead please.

Overall I’d say I’m satisfied. I’m gonna keep using it until it breaks out of warranty because I’m frugal as he’ll. But I wish at least the camera and sunlight issues could be fixed. The rest can be ignored, but my phone being unusable if it’s sunny outside is unacceptable.

The hardware? I’m fine with all that. I don’t really dislike any of it even if it could be better.

Taking the camera and mic issues separately you may find some help by searching for similar topics and if you can’t resolve either with user help then maybe contact support officially.

I will stick with my fp4 after having had several issues with not being able to repair flagship models from major brands (and I tried, even forking out as much as a new phone’s worth for a new Huawei screen, being left with no usable speaker in the end). I need to be able/be allowed to repair what I own, which fp does a great job of. And I will take a lot of compromise to give me that.

However my partner wants to upgrade from her S7 after all these years and I am currently telling her to go with a 2 year old flagship model from Google or Samsung. She will get several years of good use out of it and will get nearly state of the art camera and phone performance, she knows eventually she will have to carry a battery pack to keep her phone running, but she is fine with that…

Will I get a new fp when this one finally gives up, with proper maintenance and targeted repairs?
Not sure at this stage, let’s see what the right to repair movement achieves in that time with other brands…

I think a FP is hardly ever an upgrade (unless my old phone is really old or a FP) as its always only middle class. The main purporse of a FP is different and not to be up to date technical or software wise. When you buy a FP thinking it will be competing with other phones launched the same time or for the really big ones launched the past years, one will always be disappointed one way or the other.

Let me quote what’s in the marketing copy for FP4 now:

The Fairphone 4 dual cameras are the real deal. A pair of premium lenses for all the details or the bigger picture.
Add a light sensor for blazing fast autofocus and top it off with optical image stabilization for uncompromising image quality. And that counts for the buttery smooth 4K video as well, of course.

The 48MP quality main lens and carefully dialed in image processing make for an intuitive, effortless camera experience. The Fairphone 4 lets you focus on what matters most: Image quality in every frame and setting. Capture true to life colors, in great detail, every time.

The advanced image stabilization and highly dialed-in image processing give you the freedom to explore and never worry about missing that clip, no matter the scene.

This is how it’s advertised. This is in the marketing. And, mildly speaking, none of this is true. We’re not expecting flagship specs, we’re expecting what is promised. You can’t just cop out and say this is FP and you should know the experience is going to be poor when this is how it’s sold.

Yes it’s all relative but on the face of it a buyer would expect relatively brilliant.

Then there is expectations Oops!

Mine are clearly relatively low

Thanks. This is pretty brutal, and pretty much mirrors my experience.

I like the through tests they do. But the camera scores are very close or even higher than a Pixel 3. That makes no sense.