Phone did not get the update

So today is the last day of the Android 9 rollout as I understand it and my phone hasn’t got the update. I have the latest version of the updater app so I’m wondering what the issue is?

I have the latest version of the updater app

It may not change much for your situation, but could you specify the exact version? That may help later/others in case the absence of an updater app update doesn’t mean one has the latest version. To my knowledge the latest version at the time of writing is 1.50.2

I couldn’t find the right version in the google play store, not in F-Droid.
Then I installed through F-Droid the Aurora Store app.
I choose in the Aurora Store app for Anonymous.
And YES I could update the Fairphone Updater to version 1.50.2.
Now the update for android 9 will come, if I wait.

So this means that the update rollout is being controlled by the rollout of the 1.50.2 updater app through Google Play?

I don’t have the update either, and the updater shows latest version in the store. I think around now it would be nice to know officially what is happening

If I don’t have the update after today I will make a support ticket. Perhaps there is a different way to update other than manually [last I checked the only version available from FP directly is 1.50.1 anyway] or using a third party store.

I have 1.50.1 and no update. What a wind-up! Still, Android 7 is working OK and it’s Fairphone’s job to roll this so I don’t want to have to do it myself through other means. I guess they’ll get it together at some point soon.

Q: When do I get the Update?
A: We are providing the Android 9 in batches - each with a limited amount of users, starting on March 25th, 2021. We expect that all devices still in use shall have received the notification for the update in May, 2021. This controlled roll-out enables us to quickly react to possible bugs and issues that arise in the field.

@ctiecher thank you so much for this information! I hadn’t seen that, it is really informative. I can forget about it for now, it is randomised and ongoing until May.

Interesting! I could have sworn I read somewhere that everyone would have it by 18th April.

That’s what they said in the original announcement, and what I expected until I read this extra article. 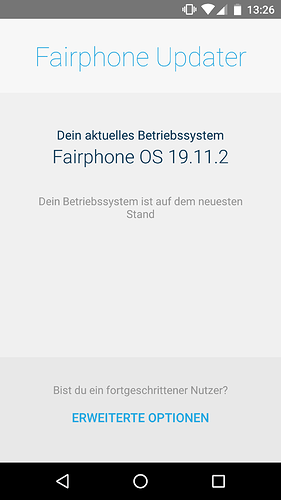 What can I do?

Thanks from Switzerland
Mischa

Hi Mischa, I moved your post here so that all info on a missed Android 9 updates stays in one place.

The Updater does not show an update yet.

Thanks for the hint to the aurora app store.

There is no issue. It’s a staged roll out, so if the updater hasn’t arrived until now in version 1.50.2 on your device, you’re still in the waiting queue. That’s intentional.
And as you are running Fairphone open, this is still in the beta phase and isn’t planned to be updated to Android 9 yet.

So there are several issues here.

There is no Fairphone Open for the FP3(+) at the moment, the FP2 isn’t sold anymore, so this is not a reason to buy a Fairphone, at least for now.

I have no experience, with the F-Droid store, so I don’t know whether it has to be updated en bloc, that means you have to load a new repository every time, or whether apps can be updated independently.

A lot of peaple care about privacy. This should be one of the prime factors of software companies who actually care for privacy, because that alone sets them apart and gives us customers a real choice.

We’re delighted to announce our new partnership with /e/ Foundation for an open-source operating system that prioritizes user privacy. /e/ Foundation is an international non-profit project with the mission to make user privacy accessible to all. When...

Second, the Fairphone Updater is not found on the F-Droid Store.

No, but Fairphone offer the APK to install at Manually update the (Fairphone) Updater App – Support.

I recently received the Update of the Fairphone Open OS. Android 9 is working now on my FP2 =D

Am I still supposed to wait for some kind of notification - before I try to upgrade? The Updater App tried to update - went most of the way and then failed. I had to go for FP2 Manual re-install and this took me back to where I started , ie 19:11:2…When is the last of the rollout planned for? What kind of notification should I expect ?

Try to update the updater app itself.