The button is peeling of from the case without any external influence.

Just wanted to let you know that my transparent back cover cracked as well. I submitted a support request and received a reply seven days later. Considering the backlog and that it’s not the most urgent problem, I think that the response time is not too bad. In my case anyway…

My glue repair failed after a week or so. I posted a support ticket; they sent a new cover by return. But it’s identical to the old cover (clear transclucent) with the only difference being “made in 2016” instead of “made in 2015”.

I’m sure it will fail again … probably just after the warranty expires… meanwhile Fairphone are going to bankrupt themselves sending out new covers. … especially if they really cost around 27euros each!!!

Hi,
now my second Case gets broken at the Volume Control Buttons in the 6 Month since I have the Phone. With ~25€ for a new Case, this is quite expensive over the years I hope I can use the FP.
Does someone else have similar Problems?

And, I’ve tried to send a direct Support Request, but the Form is not working. Or maybe it is working, but after hitting the “submit” Button, the Form is always shown again with no indication for an Error or successful delivery.

I moved your post here as this is a known issue. Please check the first post to see how to get a free replacement.

About the support request submit issue: Some people reported that choosing a different category to submit to did the trick.

I’m not able to submit the form, not in Firefox and not in Chrome, tried with different Categories and with dissabling all extensions. Seriously: WFT?

I contacted support with the suggested subject “Cracked case FP2” and received a reply that my cover will be replaced under warranty pretty much right away. Good customer experience.
Now I’m wondering: it looks like most of the covers that are affected are blue translucent, which is the same as I have. The reply from the support agent indicated that the root cause of the problem is still under investigation, which sounds like the replacement cover might show the same problem after a while. Since I’m given the option to choose a different color for replacement I’m wondering whether I should maybe do this. Does anyone have any insights here? Is blue translucent really more likely to break than other colors? Or is it maybe simply the most popular one, which would also explain a higher number of reported incidents? Or was only a certain batch of blue translucent covers susceptible to the problem and current ones don’t show this problem anymore? (I received mine mid January).
Any insights greatly appreciated.
Andreas

So, after my cover also started to fan apart, i contacted support and got a new one delivered very fast. Thanks FairPhone!
Now I’m checking whether i can somehow repair the old one. But checking the old cover i get the impression the soft upper part somehow expanded and literally burst off of the cover part… When i try to get it aligned i have the impression the soft rim is half a millimeter longer than needed…

Does anyone have any insights here?

I have the same issue with a black translucent cover.

Update: I asked FP support to replace my blue translucent cover with the color that is least susceptible to this problem. They replied that the matte covers are “more durable” so now I’ll receive a blue matte cover. Not quite as nerdy but hopefully more sustainable.

After failing to submit a ticket I contacted support by email and my cover has been replaced within a couple of days. Top service!!! 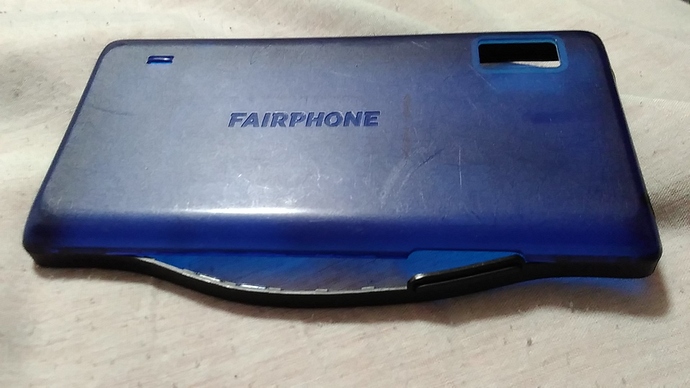