Sorry if I didn’t make my point clear.
That’s what I meant by “crappiness of camera’s hardware in general”. In camera industry you could either work against this distortion by optical magic I guess, but at least with software tricks. I guess phone manufacturers could take the second approach, but in this case the specifications of the hardware (optics and sensor) would have to be known to the software. I could imagine that stock app might be able to correct the distortion. Can someone prove this?

Is it just me, or do those photos look almost identical? For example, view the tower in the first photo at 100%.

Well… Isn’t it the point? To take nearly identical photos to compare?
Though if you look very closely, some details are different.

I meant the quality, @Alex.A.

The photos that I looked at very closely and at a distance don’t strike me as a sensor upgrade. Perhaps this is because the camera software (or driver) isn’t taking advantage.

What differences are you spotting?

What differences are you spotting?

Otherwise I must say I agree. That’s why I asked if @chb (or someone else) could take photos in bad shooting conditions to see if there is an bigger improvement on this side

just some minutes ago I took some low light photos (all with the new camera module) for comparison of the original Camera App (V2.0.002) and the OpenCamera App (V1.48.2) from F-Droid. I had to wait until it is dark outside.

The scenes from today noon were not available now, so I had to choose other locations. I turned the flash-light off, sometimes it is not very sharp.

To demonstrate what the camera is capable of with better software, here are three photos taken with the new camera in somewhat difficult lighting conditions, first with the stock camera app (automatic scene detection, auto HDR, flash off) and then with Nikita’s Google Camera 7.4 port (HDR+, flash off), only seconds apart. IMO the old camera was at least close, if not equal to this.

Wow, looking at these photos I don’t feel that there is almost any improvement from the camera I have been using for a year in my FP3: I could assure that I take practically the same pictures with my current FP3 with the old module. It is a little disappointing not to see a clear improvement with the new sensor

, so unless there is a great software correction and this difference is much clearer, I will not buy it.

By the way, thank you all who upload pictures to compare!

Sorry to derail somewhat, but are there any other reasons for getting 3+ over 3 then the camera? I can’t see any.
EDIT: Sorry, found a PDF

Except a slightly improved speaker module (louder and crisper sound, sadly not fully useful for the FP3 as there is a new amplifier in the core module), and the fact the 3+ has more recycled plastics in it, they’re the same, and that’s the purpose: not making you want to change your Fairphone from a year to another.
EDIT answering to your edit @Nevil_Overmann: It’s always good to have a reminder

Thanks @Antoine! The camera improvement seem negligable and I think I can live without the 3db increase in speaker volume

I must admit I really feel upset about this, especially for the price of the new modules

I’m still waiting for them, but I hesitate with sending them back within the 14 days cool-off period… Unless the Fairphone team would release a much better camera software to magnify these modules with good contrasts in HDR, a good night mode and use the 48Mpx to their full potential?

I’m really expecting a better zoom up to 4x with no pixellisation in good lighting conditions (as technically possible with this sensor which contains 4x more pixels, right?) and as implicitly advertised on social medias, as you can see in this Twitter post, also here, and even there.

EDIT: Added the links for proof

… only for now, I hope?
Would it be possible to ask to Wayne Huang for the tech part and/or someone in the marketing department?

I’m still waiting for them, but I hesitate with sending them back within the 14 days cool-off period…

I just cancelled my order since the feedback regarding the new modules is not too good here and I’d rather use a digicam if I wanted a real improvement in picture quality.

By now I feel that FP wasted potential here…

@Antoine, here’s a clarification I wrote on the 48MP vs 12MP point.

The “48MP” sensor is quad bayer, so it is not 48 million RGB photosites. It is 48 million red OR green OR blue photosites. When the image is rasterised by the sensor, four red, green and blue photosites are composed into a single RGB pixel. This means two important things: The 12 MP output image is full resolution You cannot get ‘free zoom’ by cropping the 48 MP image, because it doesn’t exist A lot of phone manufacturers use this marketing ploy. Reference: https://www.gsmarena.com/qua…

Hello,
does anyone else have some photos that were taken with the new camera module?
I have seen other photos from decibyte and uodalricus.

At first, I was sure to buy the modules when they are released, but I have decided to wait and see what the community says. I have to say, I am glad about the decision.

The pictures that I saw made a positive decision for the new modules very questionable and it is disappointing to say the least. If FP feels pressured to release other models to “adapt to the marked and its rules” the outcome is key. Bad or simply unimpressed news about the FP 3+ (or the modules) that sound like “there is not a noticeable difference to the FP3” are very counterproductive for the whole idea of FP. The current marked and their rules are what in the end, brought a lot of us to FP because they made it differently. If the goal was to be noticed in social media and the news, the only thing that is achieved, was the belief of people that FP is still not a device for them. On top of that, they disappointed their current customer base.

Why adapt to a marked that is wrong in many aspects and if you do, you should make a huge difference so the modular idea actually benefits the choice of a FP. It was mentioned before and I have to agree, this feels like a waste of time with a bad outcome for FP and its current customers. A hype was created with a negative outcome, like so many other hypes that have been created before. FP simply cannot do such a thing if they actually want to make a difference as a small company. The margin for error is small. People that own a FP should say to their friends and colleagues: “Just upgraded the camera of my 2 year old phone, look at those pictures.” and it should make them say “wow”. That’s how you get new customers.

If someone with the new camera module could post a test photo using four times zoom and raw (dng) file format would be great. See the screenshot. This way, by comparing the raw (not computed) sensor data we could separate software from hardware quality. Software can get fixed via updates much easier but hardware has its certain limitations. 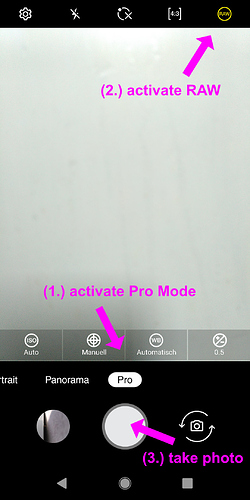 I put a DNG and the corresponding JPG here. The 4x zoom is only visible in the JPG.

My order has already shipped but I might return it too…

Can anyone tell me if theres any difference between the old and the new camera on social platforms? For example on Snapchat, where the camera quality currently is so bad, that the replies I get usually are towards the crappiness of the camera rather than what I’m actually taking a picture of. It’s really hard to recommend the phone to anyone before such easy, but essential bugs are fixed! And I don’t need the new camera unless it actually is improving this, as it is what I’m actually buying it for.