I assume the number of produced and sold devices is similar…

True, but would not it be interesting how many Fairphone devices were sold to consumers?

So from the numbers we got we can assume that about 3000 FP2s are sold a month if everything goes well. We also know everything didn’t go well the past months and private customers still can’t order phones atm.

Indeed ! I’m afraid we are still far away from world domination…

Well, everyone can order phones. Just not directly from Fairphone.com

I’m afraid we are still far away from world domination…

You can say that again! According to the map, there is no dealer in Austria (except T-Mobile) that offers the Fairphone 2 at the moment: 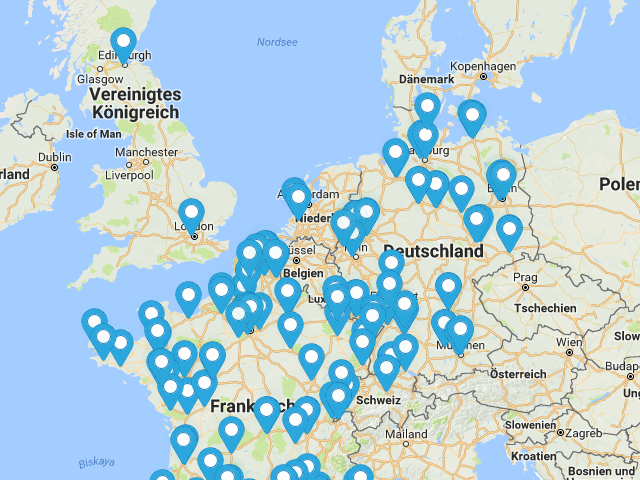 no dealer in Austria (except T-Mobile)

That’s still quite an impressive dealer-density:

That’s still quite an impressive dealer-density

You queried shops and showrooms, but currently there is only one dealer in Austria if I am not mistaken. 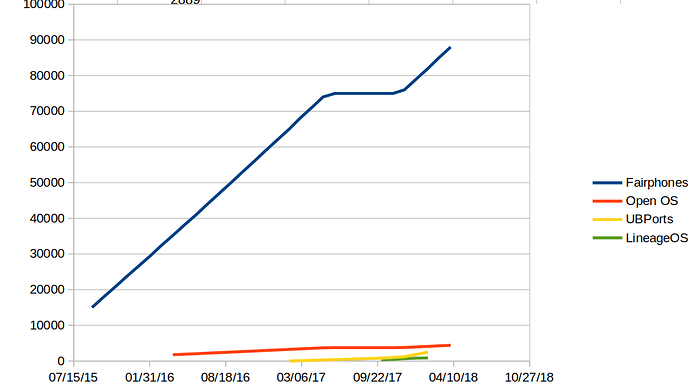 PS: Now if we were to assume that the relation between Sailfish and Ubuntu installs is somehow similar to what this poll suggests (which it’s probably not - but anyway), then the comparison between the OSes would look something like that: 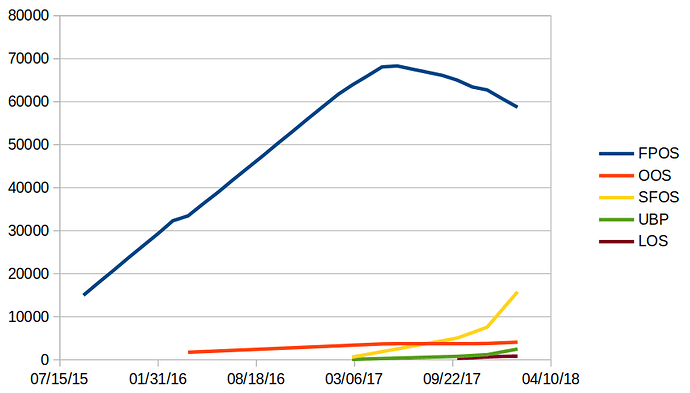 PPS: Ok obviously I still have to adjust Open OS, since it wasn’t even out since the beginning… updated

I guess the blue curve of the first diagram shows the amount of Fairphone 2’s sold from end of 2015 until now, right?

Unlike UbuntuTouch, the Sailfish port is not yet adapted to the Android6 base, for the new screen compatibility (mal is working on it). So in my opinion you can put a constant value for SFOS since the new screen release (mid '17)

That’s still quite an impressive dealer-density:

Hey, don’t remind me that the French shops are still missing…

@Esmee sent them to me half a year ago…

Link to the official store locator is here btw: https://www.fairphone.com/en/store-locator/

There are indeed no stores listed in Austria… Seems that T-Mobile was not too eager to get them back in stock.

Edit: It’s not even available in the T-Mobile online shop anymore: https://shop.t-mobile.at/archive/voice/fairphone-2-v2-rot-2308

They are offering it with a white case now:

But it seems the Fairphone is not available without (already having) a T-Mobile tariff contract, and customers living in Austria would have to buy the phone at a different dealer outside Austria if they want to get it without (an additional) tariff rate.

Indeed! I’ll send them an email.

But it seems the Fairphone is not available without (already having) a T-Mobile tariff contract, and customers living in Austria would have to buy the phone at a different dealer outside Austria if they want to get it without (an additional) tariff rate.

You can also get some number estimates from phone-specific apps in the Play Store, but it discounts people who don’t use these such as microG and LOS users.

I know from a Fairphoner in South Tiroly who went to the T-Mobile Austria shop in Innsbruck last year to buy a Fairphone 2 without a contract.

When last year? As I said before, the official Fairphone store locator does not show any T-Mobile Austria shops anymore. So my assumption is that they only have the in their online shop.

A little correction: I checked the details now – it was in November 2016.