My FP3+ has been soaking in whippingcream

I came home from grocery shopping and realized the cream I bought spilled into my backpack and my phone was soaking in it for like 20 minutes. I took it apart (removed speaker-, top-, bottom- and camera-module) and cleaned it as good as possible. It is still a little greasy, so that won’t just dry off… It doesn’t turn on. I don’t know what to do

Its only a year old and I wanted to keep it for a very long time. But even if it would turn on, I think it would start to smell disgusting after some time. Is there a way to clean it thoroughly?

The most important thing to do when your phone gets wet or humid is to take out the battery. This might not have happend quickly enough in your case (inevitably, I guess). However, you can also fully submerge your phone (disassembled as much as possible) into water or better in cleaning alcohol as long as the power is out of the phone and you give it plenty of time to dry 100%. Plenty of time would be a few days (especially when it’s water which won’t evaporate as quickly as alcohol) rather than a few hours. Such cleaning is also often offered by repair shops.

However, if your phone can still be salvaged after the apparent damage already suffered is a different question …

P.S.: On a second thought – “It doesn’t turn on” might not necessarily mean “dead”. Sometimes the connection between the body of the phone and the display isn’t good enough because the screws and/or the plastic clamps aren’t properly back in place (see Fairphone 3 Display Module Replacement - iFixit Repair Guide, especially Step 9). But please don’t try again before the phone is properly cleaned and all dry.

However, you can also fully submerge your phone (disassembled as much as possible) into water or better in cleaning alcohol as long as the power is out of the phone and you give it plenty of time to dry 100%.

I have had a phone in the muddy bed of a river overnight. Washing was a matter of agitating it in a bucket of clean water three times for about 5 minutes each time.

With an oily residue wash, dry by shaking followed by hours of drying with an air flow then use very strong alcohol to misc with any water and oil. Isopropyl alcohol is most often used as it can be bought at strength 99%+ 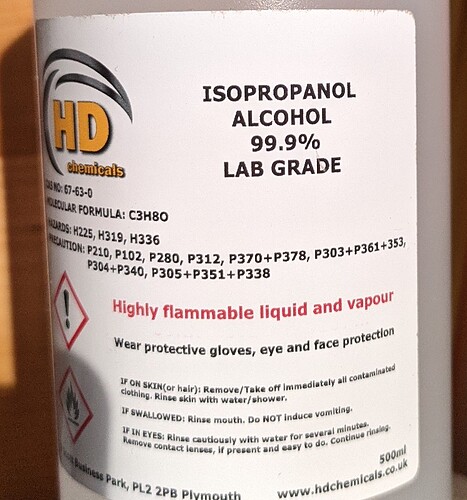 FP3 Bottom & Top module breakdown Do It Yourself

Hi. Images below taken with an FP3+ I have a defunct F3 that I disassembled to see if I could fix it; No luck; but whilst at it I thought I’d take a look at the bottom module as one issue was that it wouldn’t charge. The bottom module can be prised open, it has four small latches, two stainless steel and two plastic, so be careful. I opened the steel one first. Here is the inside of the two halves of the surround. Centre is the slot for the USB C port. The shiny B98CBC is probably the vibrato…

Sadly my old phone was s simple Nokia with a removable battery, no complicated module to clean and connect. It worked fine after a day but these more complex phone’s are more difficult.

But as mentioned do not try and use the phone for a day or more, just clean, dry and rest.

If you have a friend or #fairphoneangel near you that can help you may be able to swap some modules to test.

However if the battery is charged ??? you should be able to boot the phone with all the modules removed, hence testing the core module.

For the record: The FP3 (that Fairphone has lent me) will boot with all four small modules unscrewed (top, camera, bottom and speaker) and taken out of the device. Please note: The FP3 refused to boot with both all four modules and all screws removed. It only booted again once I had screwed the 12 Phillips #00 screws (there will be 13 in the commercially available FP3) back into the outside of the core module. UPDATE: Actually I think it does indeed boot with the screws not back in – but the di…

Thank you for suggesting the ethanol, I cleaned the phone with it and let it dry for over 20 hours. I was thrilled when it turned on again and it worked completely normal. But after an hour or so, the display flashed and went black… I wasn’t able to turn it on since then, it vibrates when I press the on button, so I guess the display might be broken… Also, the microphone and speaker are not working. I wonder if its even worth it to buy spare parts and repair the phone or if I will run into further issues later

But thanks again for your help!

Thank you, cleaning with the ethanol worked, at least kind of… Like I already responded to the other commenter, my phone worked for a little bit but then the display went black. I guess its completely broken and since the microphone and speaker also don’t work, I don’t know if I should buy the spare parts or a whole new phone since I don’t know if other parts are affected too… I think my sister has the same model so maybe I try to put her display on my phone to see if it would work.

Thanks for your quick response and help

But after an hour or so, the display flashed and went black… I wasn’t able to turn it on since then, it vibrates when I press the on button, so I guess the display might be broken… Also, the microphone and speaker are not working.

Note the microphone and speaker are separate modules in the bottom and the main bottom moduel can be taken apart for extra cleaning.

When you say speaker ~ you do mean the hands free one at the bottom not the small ear one at the top.

Re the screen. It is more likely a poor connection that a ‘broken’ screen check the small pogo connections to ensure none are stuck with ‘oil’ and gunge etc.