I’ve a FP1, 2nd batch, from August 2014. On the second battery and crack in screen near the top Rt but other than being rather slow, it still works fine.
Trying to source a battery for my wife’s FP1 bought at the same time (but used a lot less than mine). So that’s 4 years 4 months.

thank you guys! My FP1 is functioning properly again with a different browser. So I’ll continue to use it till it drop

Don’t worry, your fellow Austrian Fairphoners have you covered!

My FP1 (second batch) is still running about 20 hours on a fully charged battery, and it’s the original battery. However, I did just buy a FP2 because of the huge discount of 24% while I always said I would use up my FP1. I found an excuse: I am going to install UbuntuPhone on my FP1…

Thanks FP for starting the movement, I’ve just jumped on the wagon number 2!

I am going to install UbuntuPhone on my FP1…

I want to see that!

You are surely talking about FP2, right?

@anon83519835 Once you find the time, I would ask you to please create a “5 years of Fairphone 1” title for users to “wear” in their profile. The first FP1s arrived at their buyers from the end of christmas 2013, so an increasing number of us will qualify for it over the course of this year. 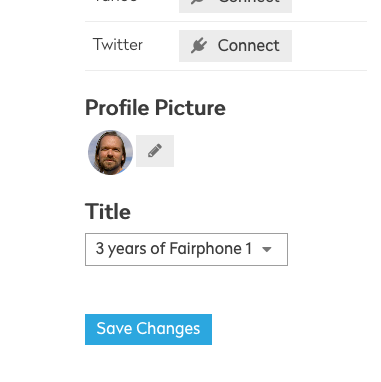 Ahh you’re right, I was too hard trying to find an excuse to buy a FP2 before my FP1 was at its end of life…