My Fairphone app on Google Play 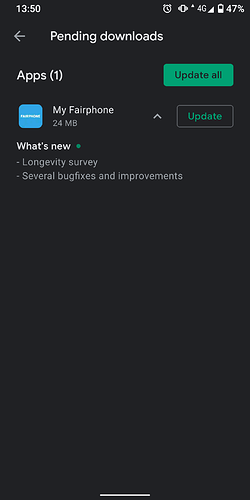 Strangely I can’t find My Fairphone app anymore, neither in my apps nor in the Google Play Store… I’m with an FP3, though…

Maybe @rae could be noticed?

Google Play notified me that there is an update for the app. But when I wanted to update, it disappeared.

That’s strange, but to be honest: I would say the app never had useful content. They wanted to change that by adding surveys, but as already discussed on the forum, it seems like nobody ever got any survey.

So maybe the app is discontinued and the update just added a delete request?

I confirm that after the update I haven’t got any surveys, but, My Fairphone app is still on Google Play. Anyway, “stranger things” … it appears on “Manage My Apps” page but It isn’t listed under Fairphone BV developer page.

Today the app updated from the store as nothing happened.

The app has been updated today through Play Store to 1.3.1 release. I don’t see any differences.

I’ve just got a new update:

App is ALL NEW, with some exciting new features like CO2 personal tracker!