Mobile data does not work FP4

I have huge issue since the last android update last week, the data connection is keep failing and I don’t know why.

The data sysmbol at the top is keep showing the small ‘x’, what I tried:

Any advice how to solve this?

The provider is Vodafone Germany, 5G is included in the contract. Actually everything was working fine until the recent update, but now it’s impossible to use the phone without WiFi.

This has been noted, I don’t have an FP4 :: Vodafone Germany.

My FP4 can't connect to the mobile network Fairphone 4

Hello, since yesterday my FP4 no longer connects to the mobile network. The funny thing is when I turn on LTE and the 4G icon comes up, it reconnects and I can make calls. But as soon as there is no more data transfer, i.e. the 4G symbol disappears, the mobile connection is also disconnected again. If I briefly deactivate the SIM card in the settings and activate it again, I get a connection again for 1-2 minutes and the whole thing repeats itself. My question is, is this a software problem (…

The recent issue with Vodafone seem to be connected to the recent update. The topic your Post was merged into as well as the above are more about “older” O2 issues.

You just have so set the APN to default. Then everything works again.

Thanks, I run the reset and now it seems to work stable again.

BTW, is there any way to remove or edit the provider name on top left? Mine is too long, as you can see on the screenshot, it makes the clock to hide under the front camera. 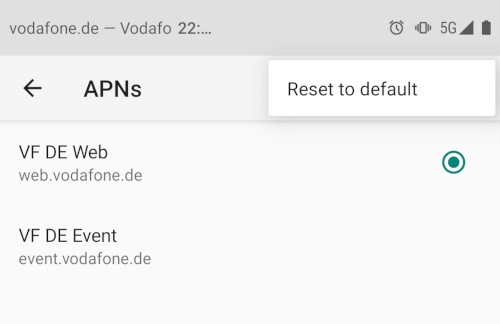 This may be what you’re looking for:

Here is one in German

I also had trouble with the LTE connection of the FP4 using eSIM with congstar (Germany) since the latest firmware update FP4.FP3W.A.128.20220516. I found a temporary solution but this needs to be fixed in firmware.

Here are my findings:

Just to add, as Congstar is using the Telekom network it might be a different Problem, although its the first time I read about D1 issues. So before you found this workaround, did you try anyrhing else, like turning off 5G and/or VoLTE, reset APN as suggested above, or just delete the APN setting and re-enter manually? Did you check with Congstar as it could be a coincidence that it occurred after the update?

I have one question to you: Do you have the same issue or no issue? You can check within 5 seconds by switching flight mode on and off and WiFi off of course. Be aware - you know how to get the connection again

Sorry for not explaining all the things before I found the solution described above:

My first thought was that congstar changed something. But I cannot see anything changed in the contract or so. There are no reports of congstar customers having problems. On the other side there are different reports on problems with the mobile connection with the Fairphone after the cited FW update. And after my findings about the APN menu it is out of my imagination that this has to do with the congstar specific points. Just try to change the three entries I described above at once and save it - that behavior is typically in software where datasets are not in sync or have content which is not compatible - for example if one part was refactored and the other was not…

Sorry for this being so looong… But you asked for it

From what I have seen so far it was only for Vodafone Network, so I’m still thinking it might be some strange coincidence and for sure it can still be due to the update, just would expect more reports when its a general issue also with Telekom network after the update. I dont own a FP4 nor do I use FPOS or Telekom network so cannot check.

I see you tried a lot and thanks for explaining this can still help others and also support might ask similar questions. while waiting for FP support to respond I would still contact Congstar support as well just to have all covered.
Fingers crossed you will not have to use this quite complicated workaround too long

I have access to one FP4 with a Congstar eSIM running stock FPOS and a FP4 with 2 Congstar SIMs (one physical, one eSIM) running CalyxOS.
Didn’t have to change any settings and no issues whatsoever

Things are getting even more complex - after @hirnsushi s report I tried another 30 minutes:

There is another point I found out: The LTE connection is available but the IP connection is not working. It is not only the small indicator arrows blinking while there is the x in the triangle. Even the network status is “connected”.

Not sure what you did and I assume you know that APN are provider specific however should you have added Congstar data I’m not surprised it did not help.

I had after the update also the problem that i had no mobile data connection with vodafone/Germany. Handy-Konfigurator: Surf- & Mail-Einstellungen helped me to get this fixed. Now everything seems to work again.

I had the same issue ( No Internet Connection after Update/Vodafone) and it made me crazy…
But I am so gratefull that I found the solution in this Forum!
For me it worked to reset the APN and now it seems to work again!

No, sorry, I think my description is misleading. I try it again.

After switching the Vodafone SIM completely off, rebooting the phone or switching flight mode on and off again, the data connection works perfectly with the Congstar eSIM without any hack.

I have the feeling that if (!) I would have a datapass for Vodafone I could update the mobile access data as the others did and everything would be OK. Until then there is some internal settings of the Vodafone SIM preventing successful LTE connections via the Congstar eSIM without my hack.

In my eyes this is still a bug in the Fairphone FW - there should be no influence from data connection settings of one SIM to the other - shouldn’t it?

PS: Tried the Handy Konfigurator - does not work reliable. I think this would get better if I would have a datapass for Vodafone…

Its surely caused by the latest update and it resolvable by resetting the APN of Vodafone using the three dots or using this configurator thing. Dont know if it only helps when mobile data are enabled. Overall even if caused by the update it might still be a Vodafone fault as they have to test and approve an update before it is rolled out. Did you already do a reset of all network settings? If not i would try this