Prior to purchasing my Fairphone 3+, A key area of phone use for me was recording good video footage at live music events. I was able to capture this through a google pixel 3. Since purchasing a Fairphone, any live gig/concert footage that I capture has been inaudible and distorted. I get the impression that the camera mic just cannot cope, however given that even cheap handsets manage nowadays, I am wondering if there is a setting on the phone that can lower the gain on the mic to prevent this from happening?

Hi, welcome to the forum!

When the Fairphone 3 was released it had a bug that applied a kind of noise reduction filter to videos recorded with the default camera app. At that time I recorded a video to show it, in which I compared the original recording with a recording made with the Open Camera application (F-Droid or Play Store) and with two different settings. You can watch it here: 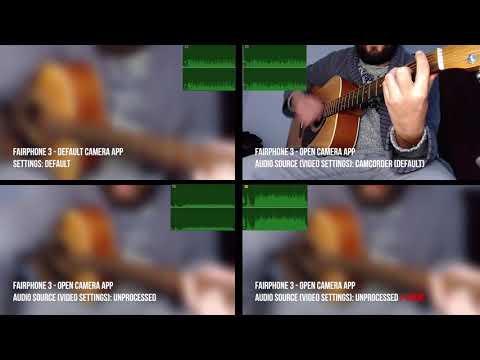 I haven’t used Open Camera for a while, but I think you might find it useful for recording live music concerts by selecting the “Audio source: unprocessed” option. I imagine that setting selects the lowest possible gain that the microphone picks up.

I hope that helps.

This issue has been discussed a number of times

was to shout at the phone and I can see the clipping on the recording app. With fingers covering both mics there was no clipping. So a way to dumb it down a bit maybe all that’s required

I had the exact same issue in the past (using a Fairphone 3) and listened to Mixigodo’s advice => using Open Camera with “Audio source: unprocessed” made it possible for me to record even very loud Metal concerts from the front row with very decent audio quality.

But since some weeks - I think it might correlate with the last Android 11 Update?? - the Open Camera App doesn’t record ANY sound when “unprocessed” is selected… With the other selectable Audio sources, the microphone is clipping again

I also deleted and reinstalled the Open Camera App, but it still doesn’t record sound with “unprocessed” selected.

Did you try it already with your phone and does it work for (both of) you? Then I guess I would write to the App developers, maybe they can do something about it.

I tried all audio settings in Open Camera but the quality is always very bad.

I used to record me playing the guitar but I stopped when I moved to FP3+ as the mic is unusable. It’s awful both when recording videos and when recording only sounds.

I tried a lot of sound recorder apps and Open Camera as a video recorder app but the result is always horrible.

When I really need to record something I ask my son to lend me his phone, that’s the only workaround I’ve found so far

I found a solution - at least for me it now works again!

I also tried other camera apps that allow to use “unprocessed” microphone signal, but with the same effect - no sound at all. So as I guessed, I think it must be a problem with the Android software (since the last update), not the camera app.

But I tried it again with Open Camera and set both "UNPROCESSED AND “MONO”. Et voilá - videosound is back and mic not clipping anymore! Might be too silent for “standard” environments, but I remember there are other apps/threads on the forum that describe how to increase the signal afterwards.

So for me, setting MONO was the key. I haven’t read about that on the internet elsewhere, so I hope that helps others, too.