On my Huawei P30 I could take a screenshot, open “edit”, crop it and then directly share the cropped screenshot via an app.

On my FP4 I take the screenshot, open ‘edit’, find the crop option somewhere hidden behind other options, crop it, save the crop as a copy, open Photos app, find the screenshot and share it.

How can I get a workflow as seamless as on the Huawei phone?

How can I get a workflow as seamless as on the Huawei phone?

As far as I see, the App used as gallery is responsible.
You could try Simple Gallery Pro (Play Store / F-Droid) as an alternative to the default gallery App, editor looks like this after choosing to edit a screenshot with it … 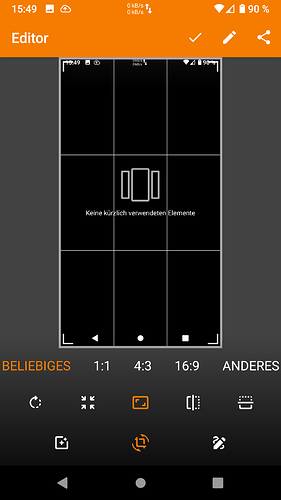 Once installed, Android should offer a choice of gallery Apps next time you want to edit a freshly taken screenshot.
Sharing works with the current editing status, the edit doesn’t need to be saved first (I just tried).

You could try Simple Gallery Pro (Play Store / F-Droid) as an alternative to the default gallery App, editor looks like this …

Thank you, I’ll try it out.

just a warning in case you like Simple Gallery well enough that you’ll decide to disable Google Photos that comes preinstalled; keep in mind that the stock camera won’t let you open last used images from the viewfinder if you disable Photos, and will crash if you try it. personally I can live with it, but I’m just throwing it out there. I’m also hoping they’re gonna change that in some future update.

Good advice (that came a bit too late

). Does the support team already know about that?

no idea. I’m planning to use my 4 for a few weeks as it is and compile a list of my impressions instead of flooding the support with a bunch of short emails, so I haven’t let them know about it yet.

also in case you don’t know, you can still reenable Google Photos if you go to Settings > Apps & notifications > See all X apps, and scroll down to Photos.

To be honest, I think it is easier for support to have each problem as a separate ticket. I just opened one for this topic. I find it surprising that Fairphone OS is so deeply interwoven with Google apps in some places.

I find it surprising that Fairphone OS is so deeply interwoven with Google apps in some places.

For me it’s not surprising. FPOS is no Google free system. There are people appreciating Google apps. For others alternatives like LineageOS, /e/OS, iodéOS et al come (hopefully soon) into play…