Issues with the forum

Never mind, thanks for the information!

@leomakkinje I have just found a thread in the Discourse community forum that could point in the right direction:

I have created a new discourse community, and I am part of a few others where I have had the option to install as a PWA when using Chrome, including this one (meta.discourse). I don’t get this option for the one I created. Is there a setting to be...

Our Large Icon is rectangular so that might be the cause.

I’m wondering which icon you are referring to?
The one on this site, top left, which is a jpg, not a png as mentioned in the discourse forum.

On my phone ‘app’ firefox lnk there is no icon. 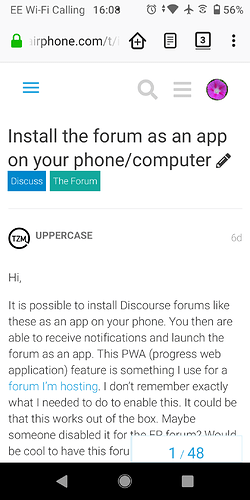 I’m wondering which icon you are referring to?

It’s the blue Fairphone logo (with the full name spelled out) that is shown at the top of certain pages.

You mean this one which is a jpg

This topic referred to mentions {512x512 png} do you think that may be an issue ?

No, not that logo. It’s the one you’ll see after clicking the hamburger icon in the top-left corner.

Ah! on the mobile Android homescreen link or app

Anyone know why replies moved from one topic to another frequently insert out of chronological order? Feel free to let me know if this was discussed or explained before (and where). I know it has kept occurring.

I guess they comes in the order they are merged. Which was my mistake in the NZ topics merging. I’d love to know if it’s possible to rearrange them in chronological order without having to undo/redo the merging… And if not, if the forum support could be advised @admins?

And if not, if the forum support could be advised

As in us making a feature request?

How often does this problem arise? Do you have an example?

Antoine reversed the merge that created such an example today, but I found this older example:

Note that Paula’s reply is succeeded by a reply from way before Paula wrote hers.

So the three messages from October 2015 are the ones that have been merged in after the fact, are they not? And you would like them to be sorted in chronological order based on the date they were written, not on when they have been moved. Correct?

Looks like someone is already discussing about this: Moving posts into an existing topic doesn't keep chronology - #33 by downey - feature - Discourse Meta

I think I agree with the point made in the latter thread. I can see situations where the current behavior makes sense, and others where yours would make sense.
I don’t know which type of “situation” triggered this latest message on your part, but I would consider going the easy way and simply close one thread and cross link between threads. My two cents.

Please do read the “Don’t merge topics!” one, they explain their reasoning pretty well.

The original issue today was about this new topic: Fairphone downunder I’ll consider the recommendations you linked to, although just closing topics (and recommending others if possible) is always tricky especially with new forum users as it often appears – mistakenly – as very rude (“I was censored!!!”).

is always tricky especially with new forum users as it often appears – mistakenly – as very rude (“I was censored!!!”).

I am painfully aware that most people tend to take personally any sort of “you should do this instead” approach. I guess that’s just life, since the beginning of time

TBH, I don’t see this as a big issue. As long as you don’t merge month old topics, a few days difference is not very important is it? The one thing is that one should be careful with merges as much as possible.

I think I agree with the point made in the latter thread.

Actually I mainly don’t agree with the linked poster.
Especially the statement

If there is moderation of conversation quality then something should be done to reduce the noise and I would hide, archive or delete those topics

in the post Don't merge topics! - feature - Discourse Meta is disqualifying that user’s post for me.
Deleting a post or topic (and hiiding and archiving is similar) just because I as moderator regard the quality as non sufficient really sounds for me as censoring. So I’d agree with any user saying

in such a case…

Without going into a full analysis of what that user said, I think the core of the discussion is as follows:

Merging should be the last resort

I’d just say merging shouldn’t be automatic and particularly be avoided when moving whole discussions, in which case indeed:

URLs in the user profiles are shown twice. This is not the case with a Discourse forum I host. Probably a theme (component) is not configured correctly. 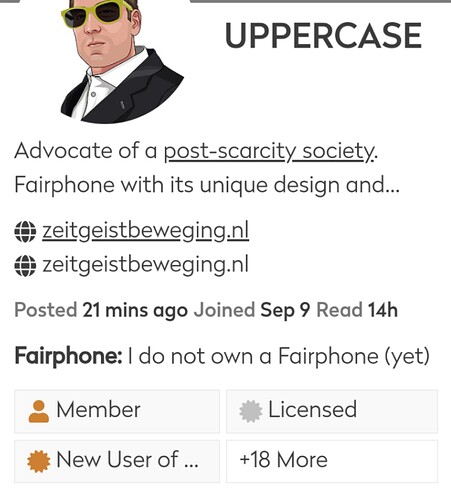