I was also plagued by the ‘somewhat common’(?) issue of the screen suddenly becoming unresponsive to touch input. The issue would appear either directly at the lock screen or even during using the phone. My original “solution” (which I have also seen people describing here in the forum) used to be to switch off the screen and then bend the phone a bit. That is, hold it at the long ends and push in the middle, either on the screen or on the back. Obviously does not feel great to do this to your phone

It was always only a temporary fix to take the phone apart and put it back together again. But the last time I did it I figured out what was the issue for my phone:

There is a little metal cover over some electronics next to the contact pads on the back side of the screen unit. The cover is held by and presumably electronically connected to 6 little -whatdoyoucallthem???- “grabber…claw…thingies” – see the pictures. To hold+connect the cover, you simply squeeze it in-between the arms of the grabbers. And in my case these arms were not bent properly anymore and thus did not properly hold and contact the cover. The first 2 pictures show how the cover looked after I took the phone apart. The last picture shows the “spring-contact” of the main unit connecting to the back of the metal cover. Not sure whether that was necessary, but I also bent that one a bit more to make sure it properly connects to the lid when reassembling the phone.

Once I removed the little cover and used the tool shown in the 2nd-last picture to gently bend the arms such that they would properly grab the cover again, I did not have the issue of the unresponsive screen anymore for several months. (I also slightly bent the short “walls” of the cover inwards.) I then had to repeat the procedure one more time and it was now good for almost a year. I have to do it again now (and that’s how I remembered that I forgot to post this potential solution to the forum :/).

Here are some pictures to show what I am talking about:

That’s how it looked after opening (I probably only noticed b/c it was already fully disconnected): 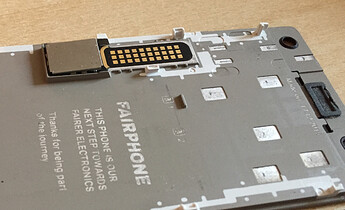 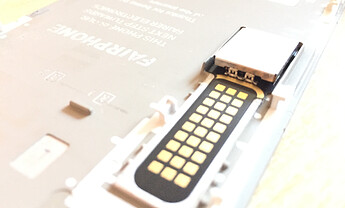 These are the grabbers/connectors I was talking about: 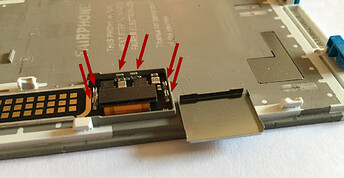 The tool I used to carefully bend the grabbers (Note the difference in the gaps between the grabbers in this and the previous image!): 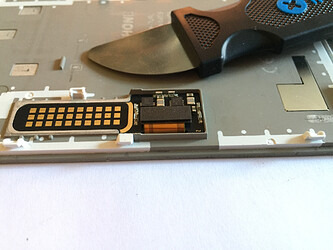 The “counterpart” with the ‘spring-connector’ marked: 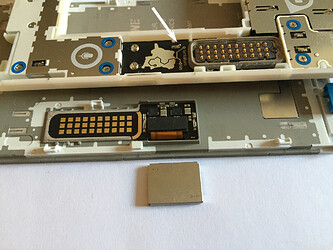 I hope this is still of use for anybody

This is interesting. Did you ever get the screen disturbance (pixelated lines, repeating artifacts) that is often described as a possible result of the badly connecting screen connector?
Or was it just touch input that you had problems with?

I just checked my old fp2 which had both lack of input and screen disturbance. I noticed that the metal shield you mention on the screen unit was lifting up in the opposite corner to where the metal spring connector would press on it.

for me it was only the unresponsive screen.
– so did you manage to improve anything for your phone now?

Hot tip!
I’ve the same screen blocks. I’ll tune you about the results.

Thank you for the advice. I have a similar problem and will try your suggestion now. I’m a bit afraid to break it though, as they don’t bent that easily. Just bending the “claws” with a knife, right, to open the metal cover…?

@Sarah_Beurms i think i did two things: i) push the “claws” together,using the tool in the image above. always two claws together (i.e. 3 x 2 claws, push from outside the chip region, then from inside) and ii) bend the short “walls” of the lid a bit inwards to increase the spring force between grabbers and the walls.

Unfortunately it seems like I cannot edit my original post anymore. I wanted to add this: Note the difference in the gaps between the claws/grabbers in image 3 and 4!

I made your post a wiki so that you can edit it.

thanks, I made some edits, I guess you can change it back?

Hi! I have similar issues and I was about to try this out, but a bit foolishly I removed my metal cover without looking at it properly beforehand… Does it matter in what way I put it back? I noticed that mine has something white and plastic looking in one of the corners on the “inside” and a small hole in the other corner on the same “short side”. And is the idea that the grabbers should hold the lid more securely when I’m done?
Thank you!

As I did the same mistake, I can tell you it doesn’t really matter, I have managed to make a screen work with a plate the wrong way

Though I guess it’s indeed better to put it back as it was. The little hole should be in the top left corner.

And welcome to the forum!

I think that’s what I did, second tine around. First I put it back in what I thought was a logical position and it worked fine, but following morning it completely refused to respond (I assume related, but don’t know). So I tried the other way, and now it works okay (bit better than before, but not 100%).

Thanks! (I’ve been reading posts here for years without having an account, but it feels nicer with an account.)

First I put it back in what I thought was a logical position and it worked fine, but following morning it completely refused to respond

Hmm, interesting observation. I haven’t done extensive testing and this screen had corrosion inside, so difficult to know if a problem could come from moving the metal plate.

What I did was far from extensive testing, could have done more or less anything different between the two tries so I wouldn’t draw any conclusions.

thanks a lot for sharing this tip.
I tried last week on my FP2. Since then no freeze of the screen, and something interesting too: I can now reuse the left part of my screen, which is usually not sensitive to the touchscreen. I have this issue of the touchscreen for ages now. Sometimes after putting back the screen, or after a software change, it is working for 1day or two, but never more. This is the longest time of “full working screen” that I have since years. I will try to remember to post here if this is working even longer, it could be interresting to know if its a durable fix to the issue.