hi everybody, I just had my screenglass cracked 2 weeks ago and can’t buy a new screen assembly as its not available at the moment. 1 week ago somebody was selling a defect FP online and the screenglass appeared ok, so I bought it on my own risk. today I finally had the courrage to dismount that phone and everything went well till the moment I got to the screen assembly. I realised there was a saltwater-damage to the contacts and I knew I would not be able to use it on my phone. so I thought of just transferring the conpletely intact glass of the broken phone to my completely functioning phone with the broken glass. In that way I would at least recycle the broken phone and could continue with my Fairphone as there is no other problem than the shattered glass. Unfortunately there is no info on ifixit nor any forum how to do this. Somebody wrote about how he exchanged the glass of the camera by using a hairdryer but I am not sure if that works for the screenglass as well. please send me all your thoughts about it, even if the solution is not officially prooved. I dont have any garanty on my FP anymore so I am not afraid of unconventional solutions… thanx!

Not any response so far? I just came across a repair point for shattered screen glass of the usual smartphone brands. They unfortunately don’t do fairphone because they don’t have the glass and don’t want to risk any damage. But the guy was so kind to explain how they usually replace the glasses. He adviced indeed to use a hairdryer or heat gun with max. 80°C heat for around 2min. while the phone is switched off and then plug the broken glass off by using a suction cup and a plastic pick. He said to be very careful with possible electric screen contacts beneath the glass. I also found an ifixit manual for the replacement of a Sam***g S4 glass which uses exactly this method. I wonder now, as the FP1U assembly is still not available yet, iff I should try to remove the shattered glass and replace it with the glass from my second hand FP1 which I would have to remove as well of course. Is there anybody from the Fairphone repair-team reading the posts here who could give his opinion on my case? Thanks!

Is there anybody from the Fairphone repair-team reading the posts here who could give his opinion on my case?

I guess no. This is a community forum. If you want to get in touch with the FP (repair-)team, please do contact them via the official (support) channel.

You can’t separate the glass. It’s glued to the display assembly.
I’ve seen people use blow dryers on some Samsung phones to heat the glass and melt the glue so you can take the glass off but it’s a process that’s prone to irreparably damage your display unit. I also don’t know if it’s a viable solution for a FP1.

Also, just a nitpick, but FP1 doesn’t have Gorilla glass (manufactured by Corning) but something similar from a different company (Asahi Glass) which is called DragonTail glass.

Yeah I did that and they offer me to send my FP1U to them and let them do the repair for around 130€. I just wondered if they have an option to repair the screen without having assemblies available - how do they do it and why can’t I do it by myself…

Hey Jerry, thanx for your answer and the correction of the glass type in the title. Yeah indeed, the broken pattern of my screen glass looks more like a dragon then a gorilla ;-). Anyway, iff Fairphone repair service offers me to send my FP1U to them for repair while not having display assemblies at stock, I think there must be a way of substituting just the glass and not the whole assembly. Its a real pitty they didn’t include this option from the beginning so many people wouldn’t face this problem now, while screen assemblies are not available. I think I give it a last try and go to a local repair store and ask them if they can do it for me. I let you guys know how things continue…

Fairphone always holds a number of spare parts for their repairs even when that means the spare parts run out of stock in the shop (so there probably are spare displays in Fairphone’s repairs unit right now, but they cannot be bought in the shop).

Hi Urs, I read the Comunity Update on spare parts today and even they talk about batteries it confirms your theory. I think I’ll give it a last try at a local repairshop and if nobody is up for the job, I probably send my FP to Amsterdam for repair. At least I know now how to disassemble my Fairphone and soon as the new screens are available, I can still repair the used FP1 I bought and resell it ;-). Cheers

Hi everybody, so here is how everything went in the end with my broken fairphone glass. I will include some pictures to the story to illustrate the process

I tried to convince some repair shops in Berlin to take of the glass from the still working screen, but everybody refused saing its too risky and the screen could break. So I kept waiting for display assemblys coming back to the Fairphone shop which actually did not happen soon after my last post. While waiting the crash in the glass becam bigger and bigger and even some glass pieces started to fall off. Thats how it looked in the end: 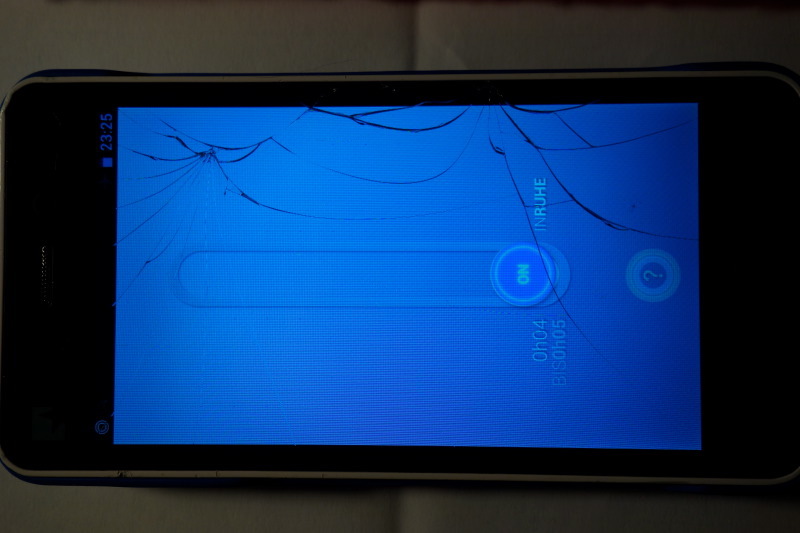 Then one day I read in the German Fairphone Facebook group somebody was selling a used but intact FP1U display assemply and once again decided to buy it at my own risk. It arrived well and I decided to merge it with the used FP1 I had bought before. It took me just 45min as I was doing it the 2nd time now. Below you see the process. 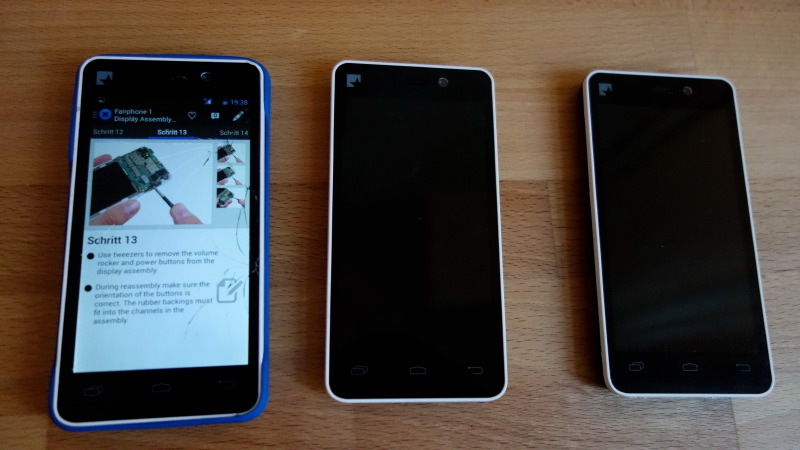 The used FP1 and the FP1U display and on the left side my still working FP1U with the iFixit manual on it. 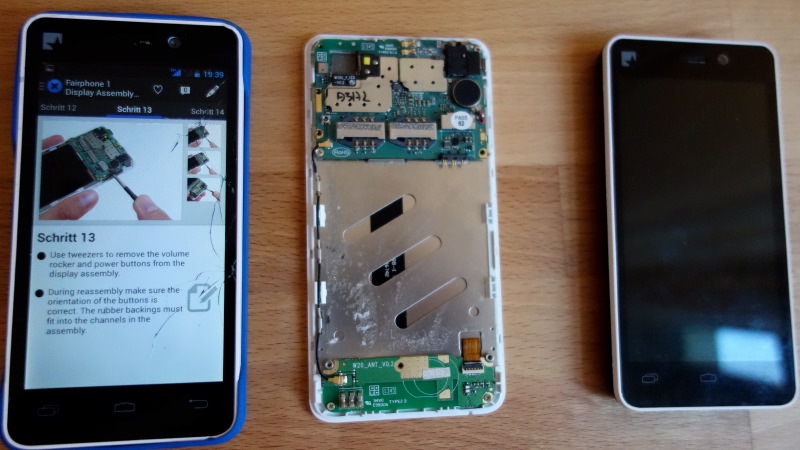 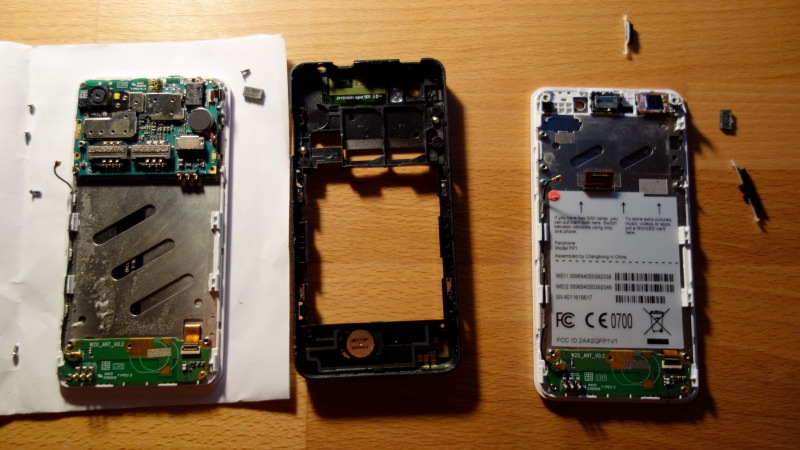 I transferred the motherboard, camera, power- and volume-buttons from the FP1 to the display assembly of the FP1U, closed it with the midframe, added the battery, pressed the power button and voila: it came to live! 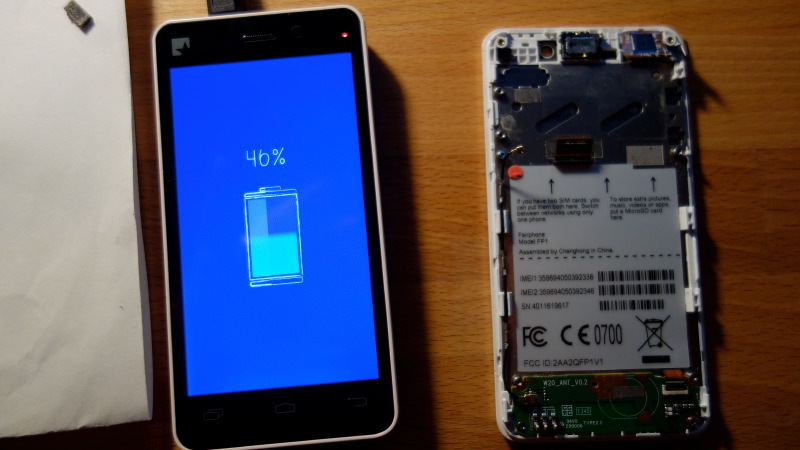 So now I had a complete well functioning Fairphone hybrid in my hand: FP1U display assembly, earpiece, antenna and daughterboard + FP1 motherboard, camera, battery and midframe. I checked it calling, connecting to Wifi and taking pictures - all perfect! The only thing missing was the metal-back-cover as the FP1-seller gave it to some nostalgic 1st edition back-cover-collecter

I decided to put the back-cover of my FP1U on it and buy myself a new one from the fairphone-shop as soon as the display assemblies would be back for sale. And you all knew what happened next - right: on the very next day I got the message that displays are back in stock

Great! Yes, I know - would I have had more patience in the 1st moment and not bought 2 used, semi-complete Fairphones - I could have simply ordered the display now…

Anyway, I just saw it as a very good exercise and thought: why not get myself the brandnew display assembly and a new back-cover and when repairing goes well, I still can sell the Fairphone Hybrid for somebody valuing my work

Said and done, I imediately ordered from the fairphone shop and this week finally had the time to complete the story. 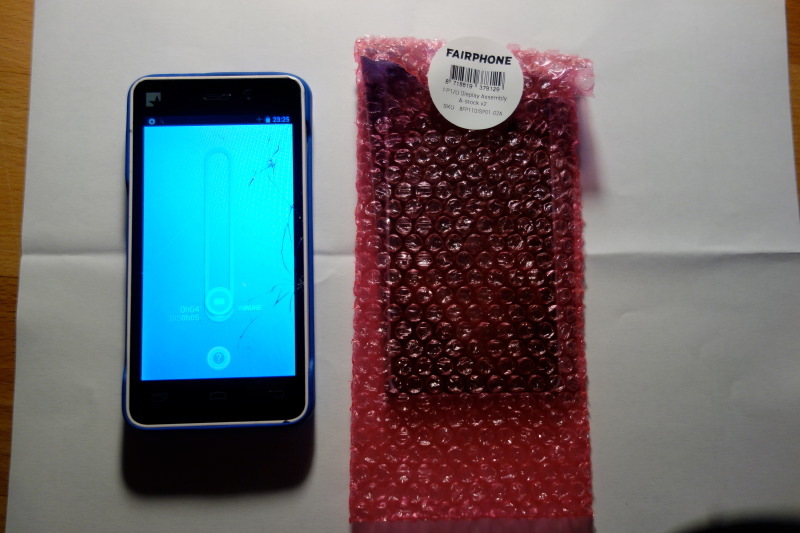 The brandnew display assembly arrived very fast (3 working days after ordering) and I started imediately to repair my phone, knowing already very well every step of the procedure. Of course 1st thing I did was a back-up of my data and app to a microSD card - just in case anything would go wrong… 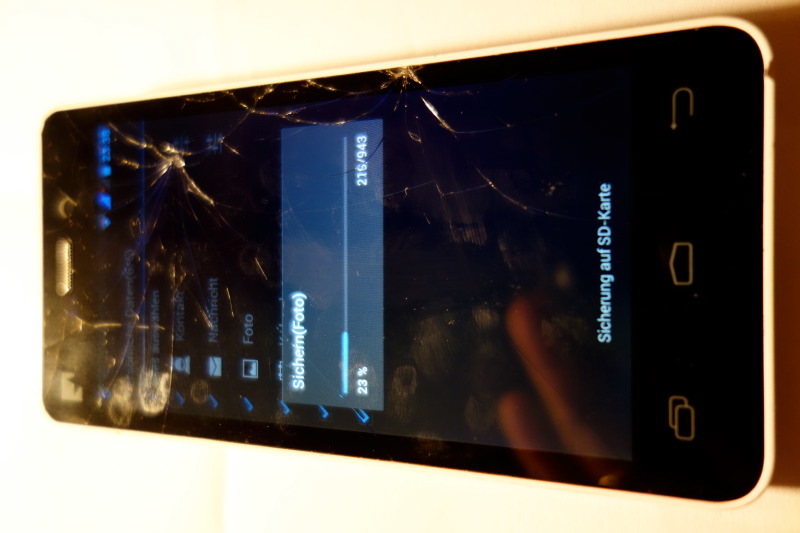 Now the final mission could start 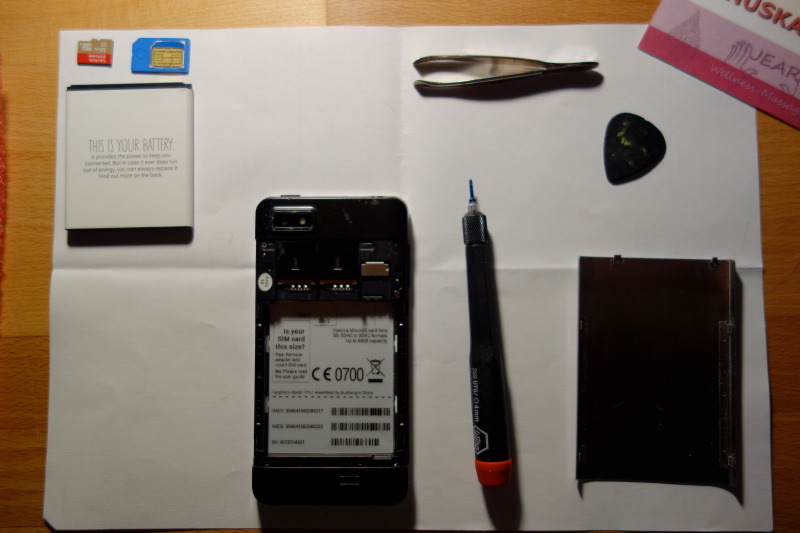 Here is what I used this time: a phillips screwer for all the tiny screws, usual tweezers you find in the bathroom, a guitar plastic pick and a plastic bonus card for opening the midframe and seperating the cable-connections. 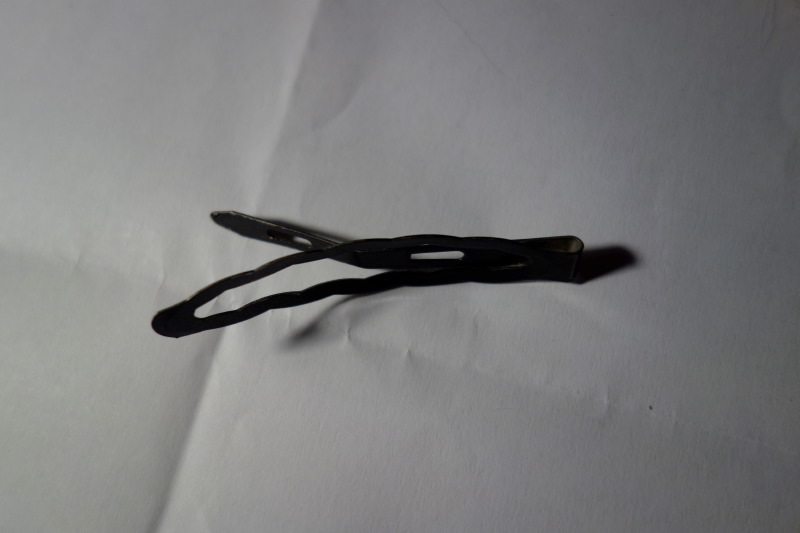 It turned out the plastic pic was too thick and the plastic card too flexible, so I used my wifes hairclip instead in the end which turned out very helpful for other disassemply steps of my fairphone

Two small observations for those of us, who also use the ifixit manual for replacing the display assembly of FP1/FP1U: 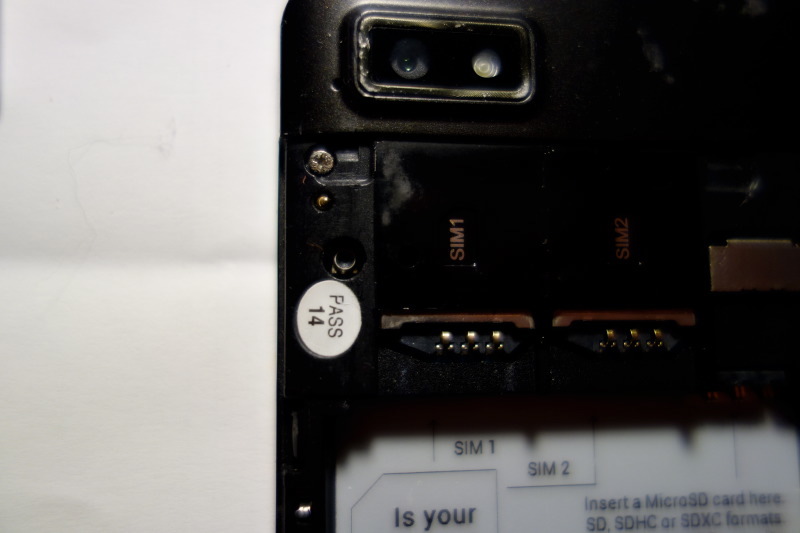 There is one tiny srew at the left side of the midframe hidden behind a control sticker, which you have to remove first. 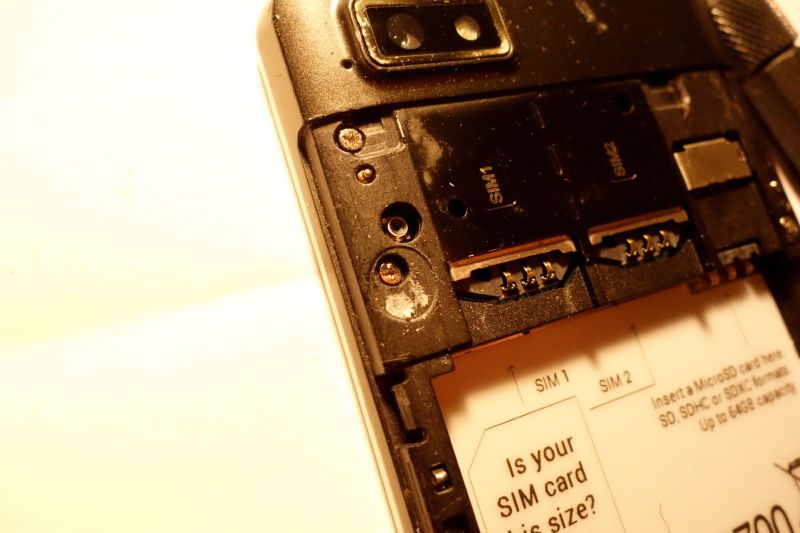 The manual speeks of three screws to release the daughterboard were there are actually only two. the screw in the middle was missing in all three Fairphones I disassembled but I had the impression it was not really necessary so probably the builders decided to spare the material 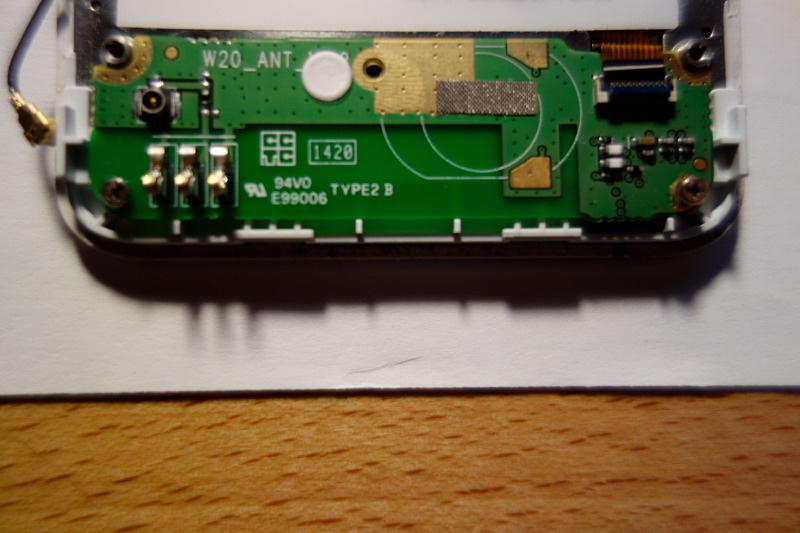 Once again I managed sucessfully te disassembly everything and thats how my own FP1U looked when before I started to reassemble all pieces on the brandnew display: 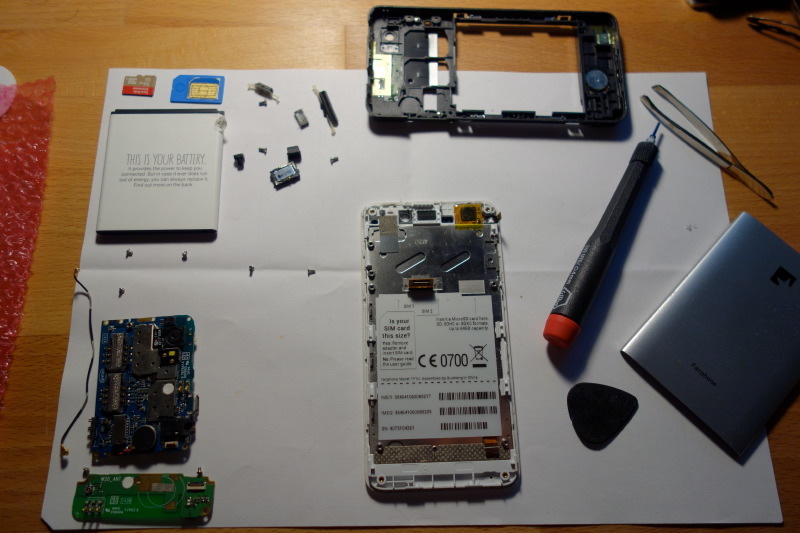 The new display came with a tiny rubber frame for the earpiece and with protection label on the adhesive were the camera-unit would be fixed. So I had to remove the old one from my earpiece and take of the blue label before putting everything together again. 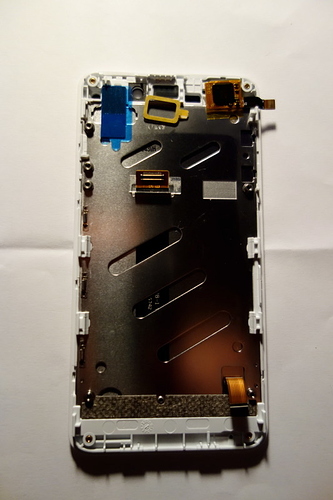 Everything went very well and it even took less time and I worked very calm as I had good experience already from the former repairing/ merging action. In the end a little suspense again pressing the power button - big release: I did it! 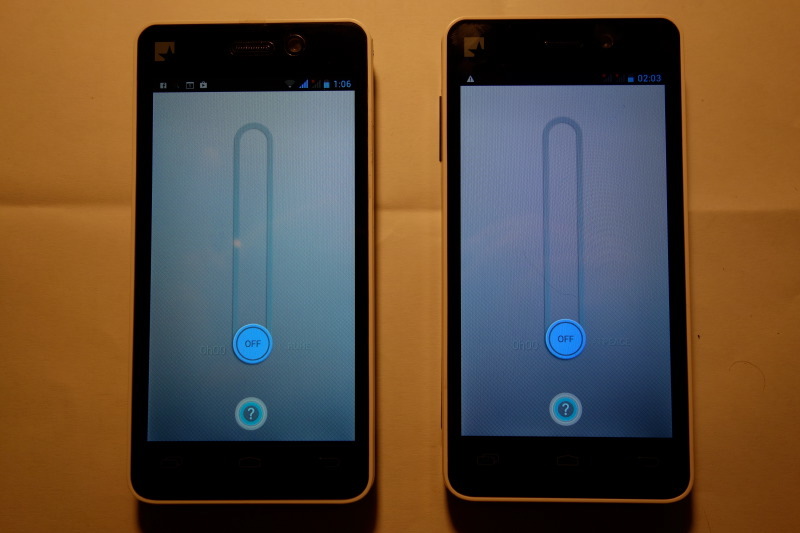 So now, 8 weeks after it broke, I finally have my own FP1U repaired and as a side effect have a wellworking FP1/FP1U hybrid available

So if anyone here liked my story please share it to who ever is in need of a used Fairphone and would be willing to pay me a fair price for it. I spent 65€ on the used FP1 parts and another 56€ for the FP1U parts including the shipping. That would be a total of 121€ for the material cost. For your information: both sellers were the original buyers of the Fairphones and I have the personal contacts of them, to make sure there is no theft involved. You can back check the IMEI-Nr. with fairphone if you want - everything completely legal!

If you want to pay me a bonus for disassembly and assembly work I would really apreciate it - make your offer on the Fairmarketplace of the forum used FP1/FP1U hybrid for sale or PM me.