How to edit the hosts file on FP2

2 years ago, I created a post on this forum detailing all the steps on how to edit the hosts file on Fairphone 1.
Now, with my new Fairphone 2, I would like to do the same!

DO THIS AT YOUR OWN RISK! It’s not my fault if you’re abducted by

I was doing the following on FP1, I tried it on FP2, but calling “su” on step 5 did not work. So I just added one initial step to root the phone. The rest of the procedure is stricly identical:

You’ll have to root your phone. The easiest way is at the moment this one.

The easiest way is at the moment this one.

You mean the safest. The easiest is with Kingroot.

Thanks for the Kingroot alternative, I’ll try that first!!!

I just updated the tutorial, adding one required initial step to root the FP2.
As @paulakreuzer mentioned, I used Kingroot and so far it worked perfectly.

Oh yes, @paulakreuzer, you are right. Maybe @Antoinet can add the disadvantages of KingRoot to his post? (NOT open-source (you don’t know what it’s doing exactly), using security vulnerabilities for rooting, IMEI (and propably other sensitive data) is transmitted to developer (in China))

At least it’s difficult to tell if they are trusworthy or not. The topic was already discussed here: https://forum.fairphone.com/t/kingroot-and-fairphone2-share-your-experience-please/11925. I’m really glad that another quite easy y much safer solution to root it was found.

There could be (maybe) a non-root alternative using a local fake VPN (only supported over Lollipop, I think).

NetGuard is an example. It’s main use is to block network traffic for particular apps (or all), but latest version (0.83 as today) has the ability to use a host file downloaded from an URL (I’m currently using the AdAway one) and a strangely disabled option for upload a local hosts file (maybe an upcoming feature?). 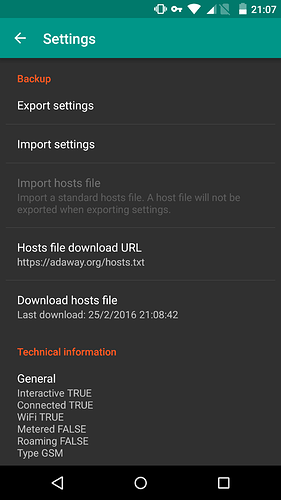 Today I received an update to version 0.95 on F-Droid and I can confirm the option is enabled for upload local hosts files. So no root needed! \o/

@Roboe Interesting, but I still prefer using the hosts file since I spend too much time on news websites, and blocking it from the host file is actually the best way I found to fight procrastination!!!

@paulakreuzer Thanks for the (much) safer alternative, and not that difficult!
I wanted to update step 7 to:

But it seems that I can’t edit the post anymore, could you do it for me?

The NetGuard way was intended for non-root users, and it is more limited, indeed,

If you have root permissions, AdAway let you easily add custom sites to the blacklist, \o/

PD: FPOS-OS is officially released and pre-rooted! I recommend checking it out if you don’t depend/want to depend less on Google Services,