I bought a FP2 one year and an half ago but I struggled to find a glass protection for my FP.
I kept the screen plastique protection until it was completely scratched and decided to try a nano liquid protection but its didn’t worked so well.

For my next purchase (FP3) I really wisch to buy a glass screen protection. I know shops that can print it on 3D printer, so it only require to design the model (no stock, so transport)

FP2 and FP3 both have Gorilla Glass which is very scratch resistant - so you’d probably be better off without putting anything on the screen.

But it get scratched anyways

It’s easier to replace a glass protection than the screen

My FP2 screen doesn’t have a single noticeable scratch yet.

Really? because my FP2 has some smalls… And as I can’t take a picture of my screen with my phone

I can’t show you

i thought it too, but the support show me some scratches . . . and want to have money to change the screen
although I wanted to keep the old screen

Anyways, so who should be asked to create a glass screen protection to be printed on a 3d printer?

I’ve also never seen a substantially scratched FP2 screen in my activity as a #fairphoneangel and I’ve seen hundreds of screens. One or two were broken, but a 3d printed thingy would have probably not saved those screens.

support show me some scratches . . . and want to have money to change the screen
although I wanted to keep the old screen

I’m sure they won’t exchange the screen if you tell them not to.

Anyways, so who should be asked to create a glass screen protection to be printed on a 3d printer?

I have no experience with such a company, sorry. You might want to tell others where you are from so they can give you tips if they know such companies.

Once I have some experience with it, I can give a testimonial

I would suggest this one:

I use the same one for my FP2 since almost 3 years now. It is very good.

it is the same, my one is only matt

Thank you vthejay, your experience of this screen protector is very helpful.

I do not own the Fairphone 2, but I will not even consider buying the 3 until an effective screen protector becomes available.

As for the more general question, is a glass screen protector worth it, I would say yes. JerryRigEverything is an expert in scratching Gorilla glass screens and also in doing drop tests, and he strongly recommends screen protectors and cases for the kinds of phones he tests (mostly curved glass monstrosities).
One downside to a screen protector of any kind is that it demands more of the world’s resources. However, it doesn’t require nearly as much resources to fabricate a screen protector as it does for an LCD touch screen , and it is not as demanding on your financial resources either.
Handsets are at some point held in peoples’ hand, in varying circumstances, and accidents can and do happen.
Shiftphone is in a similar market segment to Fairphone and they sell their own screen protectors, so you know they are the perfect fit. They are not nearly as fair as they claim to be, but I’m just using them here as an example.
Here is one of many web discussions on the pros and cons of screen protectors - in this case glass ones:
https://www.quora.com/Is-a-tempered-glass-screen-protector-for-a-phone-worth-it-Does-it-really-protect-your-phone-from-drops 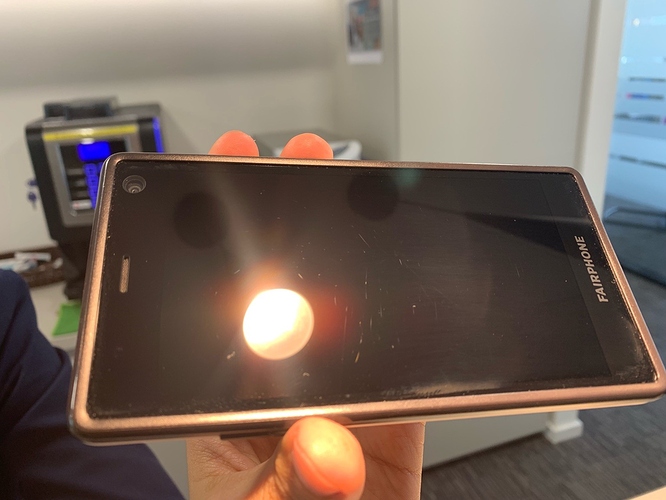 Yeah well, but unless you turn off the display and hold the screen so light is directly reflected into your lense do you really see these?

Of courses I do not see the smallest ones, but the big one on the left bottom yes
That’s why I’m looking for a protection

Really? because my FP2 has some smalls… And as I can’t take a picture of my screen with my phone

I can’t show you

For next time: selfie cam plus (clean) mirror

if you step to the side you even avoid photographing yourself.

I have one minor scratch on my FP2 but I don’t notice it during normal usage. When I first had the FP2, I dropped it while it was in my pocket and I was trying on shoes. It was perhaps 50 cm fall, but it fell wrong and I had a budge on the lower right of my screen. Which really distracted me (and made me angry cause of my action). So eventually I got this new screen (which is also better quality).

I also got a kid and she’s gonna grab my smartphone one day and toss it. So honestly, yes, I am interested in a screen protector.

Other than that I use a Feuerwehr cage to keep my smartphone on my belt. This way I got 2 more pockets free, and it will be guaranteed not put against a key (which is likely why I got that one scratch). I’ve been searching for a key protector (which also saves the key code to the public eye). Can’t find one…

Astonishingly I don’t have any scratches on my FP2 display, just like @paulakreuzer. It only suffers from overreaction when put into direct sunlight or when heated up. I’ve always kept it in my trouser pocket. Then I switched it with a used screen from a woman - maybe she kept in a handbag - and there are indeed some scratches on it.

Therefore I think how you store your phone has a massive impact on scratch affinity. Maybe trouser pockets are a rather good place for a phone.

For my tablet I have atFolix hybrid glas, but they offer different kinds of protectors.
Here is where to buy their protectors: amazon (different countries), ebay (even more countries), real and rakuten (Germany)

And that’s the protector, that is working fine on my tablet: 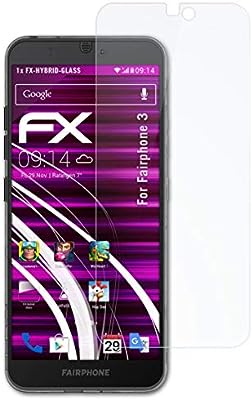 Wow! That was fast! Technology moves at an incredible pace. Thank you for the information by the way. I’ll just have to go and buy the phone myself now.

l’m sorry but Amazon is the worst company ever in terms of humans values, the only way is to boycott them. Owning a Fairphone and buying on Amazon is just antinomic