Ahh, sorry I missed a part of the convo. I can’t seem to find the processor version in LOS though at Settings -> About phone. I fired up Termux, did a cat /proc/cpuinfo and it says I got PRO-AA. I got pretty bad memory with regards to random reboots cause generally it does not bother me. Gonna try to remember!

here is my last_kmsg folder.

I can’t spot any particular pattern in the files preceding the crashes.
@chrmhoffmann, what’s your opinion on the memclock issue? Running the processor at out-of-spec conditions might explain the seemingly random error patterns IMHO.

struppi, to be honest. I don’t know. It’s weird that you have so many issues where I have no reboots at all. Some of crashes seem to be related to some filesystem problems though. I’ll try to run kernel debug and see if there’s something fishy.

I think Kernel Auditor doesn’t works with my phone. (@StevenHachel said it did not work for him either)

I just now noticed something in the description of the “Efficiency” performance profile of the power saver settings. You can read about it here (because German locale on my phone).

The “Efficiency” profile is described as
"Favor power savings. Limit maximum CPU power and optimize for power saving at the cost of higher latency."

If Kernel Adiutor doesn’t work, perhaps that setting could do something helpful?
I did set it when I installed LineageOS because it seemed to be the reasonable choice for me, but I totally forgot about the CPU limiting part …

@struppi: I swapped my display module with a friend of mine and forgot to re-insert the paper I inserted there some time ago (oh, it’s over a year now

). Suddenly I had my first reboot for a long time. Are you aware of this?

Are you aware of this?

Still, thanks for trying to rule out potential issues

The phone even reboots while just lying on the table in standby, so it’s probably not some sort of mechanical issue.

Please try again with official and report crashes with kmsg_last.

Is there a “HowTo” about creating a kmsg_last report step to step. Couldn’t find it, but did have some spontaneous reboots with the Official LOS, didn’t have it before with the unofficial version.

Here’s what works for me:

I don’t think there’s a way to access /proc/last_kmesg without becoming root first.

StevenHachel, you seem to have trouble with your sd card. Could you please remove it and check if it doesn’t have issues? And see if the reboots are gone without SD card?

There’s also one last_kmsg where the kernel is running in permissive mode and running busybox. Why?

Have now uninstalled BusyBox, because I currently no longer need it. The Kernel runs in the Enforce mode, according to query by getenforce. Will my phone go up without SDCard, which would not be an option for me in the long run.

Are you using the secard as internal storage?

…as an external device.

It should boot in both cases anyway. Chris

just had seven reboots after each other. Have removed the SD card before the last two restarts. Battery has dropped from 95% to 1%.

I uploaded the last last_kmsg file. I think my phone is just destroying itself.

can you please flash first this boot.img (boot for tomorrows OTA with more debug):

And send us dmesg here.

Where can I find the dmesg file? logcat -d -f /sdcard/logcat.txt? …then I uploaded these here.
Currently the boot_debug.img is running. 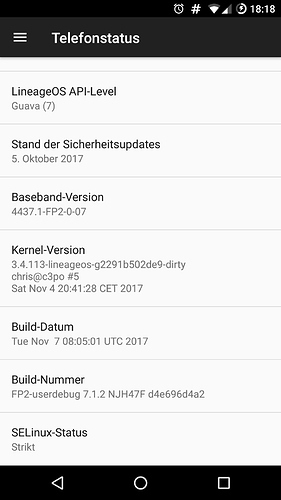