🇬🇧 🇩🇪 Battery consumption view: What is "other / miscellaneous / sonstige"?

Hi there! My FP2 OS drains battery very fast. Even in plane mode, the phone can pass from 80% to 70% in few hours, while a few months ago it was kept at 80% all night in plane mode. Somebody with the same problem? When looking at battery use, miscellaneous is on the top of the list (sometimes more than 100%! :-S and other apps at 10% or 20% at most ). Any idea what is happening? In developer options I can see that settings is the one using more RAM.

Any ideas or help please?

I’ve got a similar problem after installing Open OS update 17.07.6. Reverting to 17.06.4 solved the problem for me (except that I can’t install any updates anymore for the time being). See here: FP2 Battery Problems (drains quickly, CPU gets hot) - See batteryguide for workarounds

It seems that “miscellaneous” is now called “over-counted” in Marshmallow.
I’m having trouble with “over-counted” battery usage these last days and I also have wifi under battery usage, even if I don’t use wifi (and no location services either that could use wifi). I am on open 17.07.6. 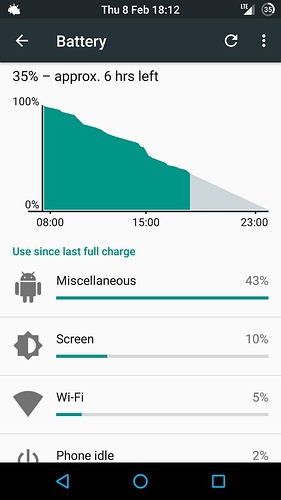 Hi! I believe nobody found any solution for this problem… I’ve tried to see some patterns… What I saw so far is the following. First, not always but sometimes battery drains very fast, even in airplane mode. The only exception is when phone is in “battery economy mode”. This is the only thing that prevents battery to drain fast. I’ve tried apps to track battery usage, greenify, etc… I’ve found a workaround that works: Go to developer options/running apps/ click on “settings” and stop it. This solved my problem. Seems that take a look to battery use makes battery to drain faster in my case

Why can’t I read that thread?

By the way… I found an interesting information about battery drain in Android 6.0 see here: 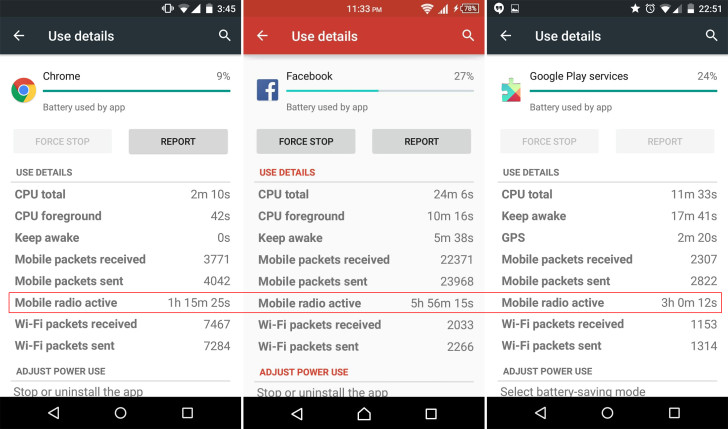 The Android public issue tracker is a place for users to report possible bugs to Google's engineers, but just because something is reported doesn't me... by Ryan Whitwam in Lollipop 5.0/5.1, Marshmallow 6.0, News

Indeed, I have some apps that I rarely use that use more battery than the most used apps. These rarely used apps show high amounts of mobile radio active.

I found an interesting information about battery drain in Android 6.0

More clearly:
You found an interesting information about battery drain in Android 5, which Google announced to fix in Android 6 according to this article from 2015

“Many users have been experiencing a battery draining bug in Lollipop caused by the device’s radio remaining active for too long, but only now is Google doing something about it. The fix is expected to roll out in Android 6.0.”

I meant that, as they mention “is expected to”, it is possible that this problem was not fixed (or has been fixed in more recent Android versions instead of 6.0). Because I’m using Android 6 and, as far as I can tell, I’m having the same problem. Maybe fairphone developers could take a look at it; it could partly explain the problems with battery drain that we are experiencing.

Because I’m using Android 6 and, as far as I can tell, I’m having the same problem. Maybe fairphone developers could take a look at it; it could partly explain the problems with battery drain that we are experiencing.

Fairphone developers are hard at work to deliver the upgrade to Android 7 due this summer, I doubt that much work will go into Android 6 anymore

I tried to read that thread but it says I don’t have the permission to read it… has it been perhaps deleted?

It was archived, but I doubt it’s relevant anymore.
It was about a bug in Android 5 and we’re now on Android 7 and the bug hasn’t been reported since.

I have installed 7.1.2 open edition.
I don’t know if it is the same bug but I get a really high miscellaneous power usage. Currently at 72%. The power usage is so high that the power supplied byan computer USB plug is not eenough not only to recharge but even to maintain the battery level. Yesterday i plugged it into my main desktop and this morning the battery was completely depleted.
The CPU also get really hot. I tried to slow the CPU down using Kernel adiutor from Fdroid repositories switching off 2 cores slowing it down in the range 300-1500 MHz and using power saving CPUgovernor. Of course those are not solutions. Luckily I’m at home healing a sprained ankle so I have plenty of time to help sorting out this issue.
Thanks in advance for your time

See the #batteryguide for some general tips.
Heat usually speaks for faulty cards. Take out the SD/SIM-card(s) and see if charging works better then.

I tried removing OpenGApps and it helped.
I thought everything returned normal, yet I still see an abnormal “Miscellaneous” power usage, even after removing MicroSD as paulakreuzer suggested.
I just can’t remove the SIM card as I need to actually use the phone. I’ll move it into the other socket to check if it improves the issue.