Does anyone know when batteries for the FP4 will be available again.

I try for three month already to order one as spare part. But everywhere I get the answer that they are at the moment out of stock.

You can click on the notify button, then once it’s in stock you’ll get an alert. Maybe #contactsupport, they know more details. We’re just users like you over here.

I posted something similar today, mentioning that Fairphone advertised the easy battery swap as allowing a spare battery to be taken along to extend operating time. Resulted in an avalanche of hate mail from people who apparently couldn’t bear to see Fairphone criticised. Tried to contact Fairphone about it but lack of spare batteries is not an acceptable topic. Pity really because the FP4 isn’t a bad phone and I wouldn’t have minded paying £150 over the odds for a phone like my old Samsung Note 4 that really could swap batteries. Can’t help feeling that we’ve been had here.

Right now, there was no availability since launch in Germany for the fp4 battery. I looked online pretty much everywhere, only shop listing it was in UK for almost 90€. Is there any plan to sell them via the official store anytime soon or will there be a way to buy them via a local electronics market?

Hi and welocme to the forum

As this is just a user forum you may not get a clear answer.

You may be extremely lucky if a member of fairphone support read, have that knowledge and answer this.

Does anyone know when batteries for the FP4 will be available again. I try for three month already to order one as spare part. But everywhere I get the answer that they are at the moment out of stock.

To avoid having to buy new batteries (even if they are easy to replace, making them is not good for our planet) why not find out how to make them last longer …

To be honest I’m surprised people are looking for them already, the device only came on the market six months ago. If it’s a faulty battery check with support.

To be honest I’m surprised people are looking for them already, the device only came on the market six months ago. If it’s a faulty battery check with support.

I think you’re right - for the most part. But there are a few people who probably want to have a 2nd battery simply to extend the runtime when there is no charging possible. I guess that this is a rare use case, though and it could be (partly) mitigated by using a power bank.

The thing is, right now Fairphone offers a smartphone with replaceable batteries, without having any batteries to replace it with.
It does not matter what my usecase is and trying to shame me into using my phone any different than I want it to is quite rude, you know?

No offence intended. I hope replacement batteries will be available soon.

Yes, I think a powerbank is probably a better solution on the whole - especially as it can serve several devices at once.

The thing is, right now Fairphone offers a smartphone with replaceable batteries, without having any batteries to replace it with.

b) Things go out of stock and maybe as the ‘use-case’ issue you referred to may not have been anticipated Fairphone have not only gone out of stock sooner than expected but there is a global supply chain issue so they may have difficulties importing.

It does not matter what my use-case is and trying to shame me into using my phone any different than I want it to is quite rude, you know?

Whereas I understand some frustration on your part, and some may not show the degree of empathy you’d like, they are bit more baffled as the use as so emotions show.

Why is a second battery so important when as mentioned a power bank could be used and useful in other situations.

On the other hand,

Sorry, but those are two different things you’re confusing here:

Hello,
I’m the initiator of this thread. I’ve decided to order a FP4, because it’s one which supports the exchange of the battery. The reason is: I’m very often on hiking tours and use the phone for navigation. And the most practible way to stretch it’s availibility is to change the emty battery by a full loaded one.
A power bank would also a solution but during such a hiking tour it’s not practical. And by the way: I had some problem to charge my FP4 via an USB socket in my mobile home. Results of my research were that without a Qualcomm fast charging protocol it takes hours or almost days to recharge the battery. And I don’t have such a power bank.

I can totally see your use case and I hope they will be available soon.

Regarding the power bank problem: Even without fast charging it should not take that long, something else must be wrong there and thus limiting the power severely. I can charge my FP4 at 5V/2A which is no QC but also not that slow.
Usually that is a cable issue, but it can also be the charger itself that is incompatible. I have that problem with one particular charger and FP3: It actually loses charge while being plugged in - while claiming to be charging at the same time!
So please try out some other chargers and cables when you can.

Will update with links to PD and QC3 12v chargers

Here’s one that can fit in the dashboard or soem panel etc. 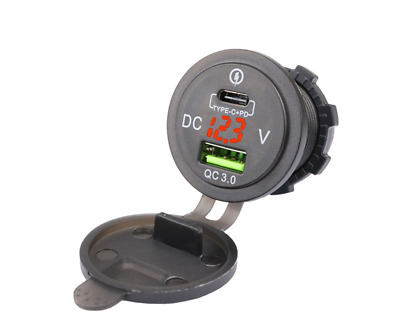 These really are a great addition to any camper van. If you run a 12V system, you can buy a DC-DC converter which will efficiently give you 24V. This is the most powerful built in socket USB-C charging point currently available.

and one to plug into a cigarette lighter socket

another showing voltage and more

The batteries will be back in store. Hit the notify button in the webshop, then you’ll be one of the first to know about it. It’s not a FP issue that things are delayed. The whole world has this issue due to corona and the war. Let’s be fair to Fairphone.

THX for the information. I’ve already ordered an USB socket for a cigarette lighter socket. I’ll report my experience.

…Hit the notify button in the webshop…
I’ve already done that almost two months ago.
But can new FP4s not be produced and delivered anymore due to the shortage of batteries an other moduls?

Fairphone is not teasing you. If it was possible to offer these spare parts they would be available. Please be patient.

But can new FP4s not be produced and delivered anymore due to the shortage of batteries an other moduls?

Fairphone probably have some phones and some backup batteries, but there does seem to be either a manufacturing delay or import delay, probably both.