FP3: Still too much packaging waste

just got a Fairphone3 and would say: The “Apple like” packing produces still too much waste: 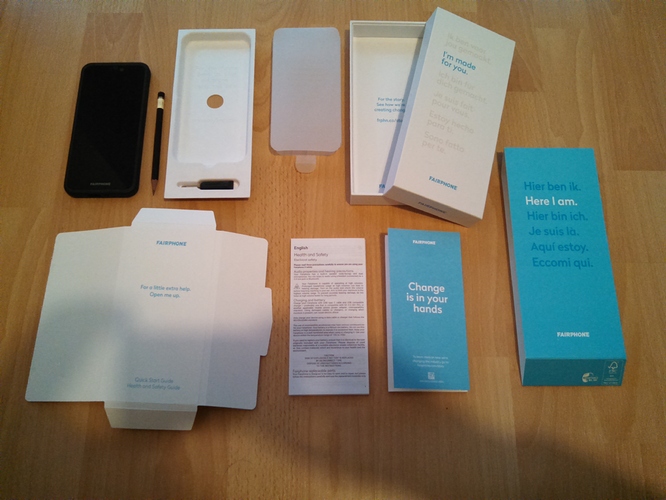 is a symbol that can reduce repair-anxiety. And sure, there are much better screwdrivers, but it’s still usable.

might show what’s obvious to you, but lots of people really need the basics and I don’t think it’s even legal to ship a device without any manual

a “sash” for the phone

all material is obviously not recycled material

but all packaging is biodegradable and toxic-free afaik.

Manual has to be included for legal reasons. Complain to EU instead. In a way, it adds to your privacy, because when it isn’t included it is logged that you visit such manual.

Only thing I agree with is the screwdriver. They don’t include charger plus cable because you probably already got it. Turns out, many people don’t, especially not QC3 + USB-C. MicroUSB, sure I got loads of those around, so with FP2 I agreed not shipping such. Screwdrivers I got loads as well as well (and iFixit set is better), especially this common format.

And the “here I am” message was nice given the long wait.

You even forgot the shipping parcel, delivery note and transport documentation for lithium cells.

If you are serious on this, there are regulations to that regard, as lithium batteries are hazardous goods.
@saljut7, @JeroenH
Regarding the screwdriver:
This is in my opinion not just a symbol, as @paulakreuzer rightfully pointed out. But this tiny screw driver is a kind of protective device for the phone. If you fasten the screws with this tool, you normally will not apply a torque that could break a module or the screw. Using a larger screwdriver, that is giving you a greater lever, you easily appply to much force when fixing the screws.
And I have my doubts, that a Phillips #00 screwdriver is something to be found in the standard household drawer. Plus, it is much less complex than a charger and much more easy to recycle.

Using a larger screwdriver, that is giving you a greater lever, you easily appply to much force when fixing the screws

I might be wrong, but I do believe it’s easier to break the screw with a smaller screwdriver because you will turn the screwdriver without turning the screw.

That would rather be ruining the Phillips recessed head instead of breaking the screw or especially the plastic part one is fixing with the screw.
And I doubt, that the danger of ruining the head is a big one. Since those are screws with a metric thread and not woodscrews or tapping screws, they don’t depend on pressure to get them fixed. And torque-wise, a small screwdriver, that can be held with the fingers only, is applying less force, than a big one, you hold in your hand.

is a symbol that can reduce repair-anxiety. And sure, there are much better screwdrivers, but it’s still usable.

Okay, if we see it as a symbol than it is a symbol easy to get lost or likely be deposited in such personal trash boxes (these boxes somehow everyone has containing things you don’t dare to throw away and find again the day we move to a new flat).
However: I like the idea of a symbol but a smart symbol would be a key chain, wouldn’t it? This way you would not loose it, you would have if when you need it (not only for your phone) and you would wear it in a way the symbol would be visible in daily live.

might show what’s obvious to you, but lots of people really need the basics and I don’t think it’s even legal to ship a device without any manual

Okay, but same protection you would have if the phone would be delivered with the display side down in the delivery case, wouldn’t you?

but all packaging is biodegradable and toxic-free afaik.

That’s nice, of course, but to compare it: Even if a paper cup is procuded “biodegradable and toxic-free” it is still something just used one time and throwed away and this is not the sustainable philosophy I would expect from Fairphone as company, sry. Given I have to deliver a product with certain things some laws force me to (like the manuals you mention): Isn’t there a smarter way to do so?

Manual has to be included for legal reasons. Complain to EU instead. In a way, it adds to your privacy, because when it isn’t included it is logged that you visit such manual.

Okay, thanks for confirming, but same here as I mentioned to @paulakreuzer. Related to privacy: Well, if we look on the privacy aspects of the FP3 the much more essential problem is the missing FP open.

They don’t include charger plus cable because you probably already got it. Turns out, many people don’t, especially not QC3 + USB-C. MicroUSB, sure I got loads of those around, so with FP2 I agreed not shipping such. Screwdrivers I got loads as well as well (and iFixit set is better), especially this common format.

Well, I didn’t ordner the USB-C charger as well because I somehow didn’t expect USB-C but this is my fault and this way you can buy just an adapter for the dozens of cables you probably already have. -> Good job done by Fairphone related to this aspect. Just: If I remember right they just offer ordering a charger. It would be better to underline that USB-C is not very common but that it is possible to use existing charge hardware with an adapter. So offering the possibility to order just an adapter would be great.

Btw: Just got a picture of the Shiftphone packaging: 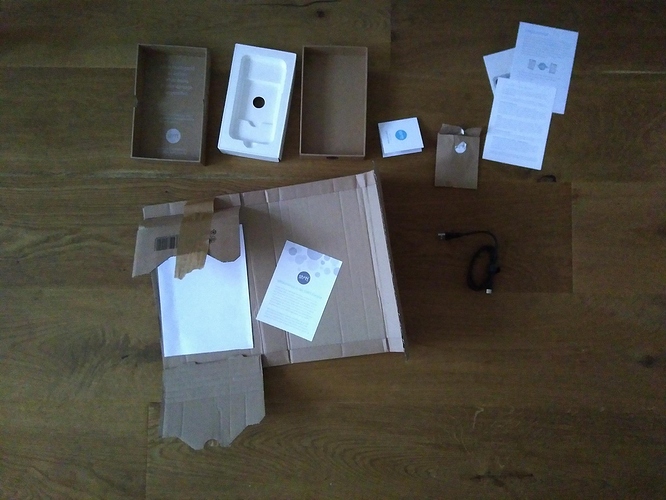 Seems the paper is recycled and less material overall

but the charging cable is not optional.

You even forgot the shipping parcel, delivery note and transport documentation for lithium cells.

You are totally right. I even forgot to mention that the package was delivered by a fossil fuel driven transporter.

Yes, and some people like to like derailment comments (currently 3). I think we both have to accept this. ¯_(ツ)_/¯

Yes, and some people like to like derailment comments (currently 3). I think we both have to accept this. ¯_(ツ)_/¯

I am not so sure about this, when I compare the pictures, but to be honest, the difference does not seem to be that big, that I would make it a topic.
At least Fairphone is using FSC-mix materials and they advise to use the box for returning another phone for recycling - engraved in the box, just when you take the phone out.

Maybe they went for this box because it

When a phone is sold online only (like the shiftphone), the packaging is a less important factor.

Okay, but same protection you would have if the phone would be delivered with the display side down in the delivery case, wouldn’t you?

But if the phone is moving inside the box - which it will on a journey that long - even cardboard can lead to tiny scratches or might tarnish the phone. (Do you know, if shiftphone is ommitting the protective foil?)

What about designing a manual on a cardboard which you can fold to have a phone stand (these gadgets people often buy to watch videos on their phones).

While I really like this idea, I also wonder, if that would not even produce more waste. This would surely take more materials than the actual leaflet. Therefore it would depend on how many people really would use this phone stand. I doubt, that this would really be a high percentage.

The backside of the FP3 is transparent. Why not printing the manual there so that you have it everytime with you

Compared to the leaflet, the available space on the phone is really tiny. That means, they would have to print it in tiny letters, that most likely would be hard to read; especially through that semitransparent cover.

In the end I consider this a business decision (most likely based on market research) made to attract a greater number of buyers. And since they chose responsible materials and advise recycling the old phone using this same packaging, this kind of justifies the chosen package.
In addition they made the unpacking of the phone a kind of event, which really might help achieving the goal.
That’s why I can live with the decision.

My main problem with the packaging is the screwdriver.
Fairphone explicitly states they don’t ship their phones with a charger, because most people probably already have one, so it would just be unnecessary waste.
But the same thing is true for the screwdriver, most people probably have a standard philips screwdriver and if they don’t, they can just buy one that also has the advantage of not being super tiny and probably a nightmare to use.
Moreover, a charger is intended to be used every day. The screwdriver however is intended to be used never, since your phone in the best case doesn’t break at all.

So, to sum it up: They don’t include a charger for environmental reasons, but instead they include a super unhandy screwdriver that like 90+% of buyers will never use and the ones who do will use it probalby less than 5 times. I actually think this is double standards in it’s purest form. Swapping unnecessary waste for even unnecessarier waste and praising yourself for being a hero.

So I definitely agree that the small screwdriver is a useful tool that makes the innards accessible and isn’t just an ornament. I also agree that at least a USB C adapter would have been very appropriate for 2019; USB C simply isn’t as prolific yet.

Recycled packaging materials would have been better, however I know that there are limits to what recycled paper is capable of.

Perhaps there are one or two elements that can be reduced or eliminated, but otherwise I find the package well done.

One might agree to that being a bit contradictory, or so it seems.
On the other hand:

That’s why I consider your comment - especially the conclusion - a wee bit unfair.

[Edit]The article contains false information and had an inappropriate tone.[/Edit]

[Edit] This is Wrong: [/Edit] There is nothing to discuss. The included screwdriver is [Edit] in my oppinion [/Edit] absolutely unnecessary for a device that should live ecological economy. It is simply a statement. A statement against unnecessary consumption. Unless, the FP3 is simply [Edit] Censored [/Edit] constructed and goes constantly broken. Then it would be wise to include a screwdriver.

Sorry, while that is absolutely true, it still is simply nonsense in this case.
You need a Phillips #00 screwdriver for the phone.
When have you ever assembled furniture or the like with a tool as tiny as this. I got my screwdriver not before needing it for replacing the display of my Fairphone 1. My guess is, that this kind of screwdriver ist not exactly widely distributed amongst the general public.
And this forum is no good indicator on that behalf.
Not having that kind of tool at hand might lead to users trying a repair / disassembly with the (way too large) screwdrivers at hand, which easily could lead to effectively destroying the screws.

Still I agree, that it is meant as a statement as well.
Yet I really do believe, that there is a real use and need for including this little gadget in the box.

Your tone is really not constructive and many would consider it trolling. Please try to be more understanding of other opinions and respectful in tone.

Most people do not have a screwdriver small enough to fit the screws in the phone. Try it for yourself with even a size 1 driver, which is quite small. Most people probably have a size 2 or 3.