The problem is NOT that Google Pay doesn’t work, it is just a side effect. The problem is, that an important part of the phones security (safeteynet) is broken at the moment for a significant number of users…

Fairphone should at least inform the customers.

The problem is, that an important part of the phones security (safeteynet) is broken

Indeed. Which indicates that someone has made more than one mistake somewhere.

OK so it has been a minute and the problem still persists. In fact, it has gotten worse unless I am missing something. Just tried to download the netflix app, which I had in the past but stopped using about two to three months ago, and I am told that my relatively new smartphone that cost me over four hundred euro, is not compatible with one of, if not the most well known online streaming services on the internet. As someone who likes fairphone and has been following them for years, this is pathetic. If fairphone want to keep growing market share they need to get a handle on this and fast. I have been putting up with my SD card randomly ejecting while listening to music and podcasts and just got on with it, not complaining. Then the google pay nonsense started and I got a little frustrated. This is something else. This is something low end chinese handsets suffer from. Hopefully one of you can point out some idiocy on my own part here so I can then rub the egg off my face, download the app and get on with my day only slightly embarrassed. 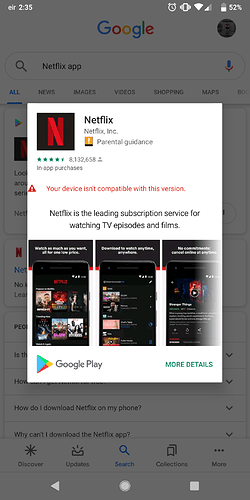 No breaking news. Netflix not downloable via play store was mentioned by me earlier in this thread. This affects ALL apps that rely on a working safeteynet.

BUT this is not a “chinese crap phone problem”. If you have a look at xda-developers or google, you will see, that this happened to major brands as Samsung, Sony and a few others in the past.

Update: you can get the official netflix apk for installing without play store from here: https://netflixhelp.s3.amazonaws.com/netflix-4.16-200217-release.apk

It looks like Google changed lots in safetynet, which lead to breakage left and right. See also post from magisk (https://www.xda-developers.com/magisk-no-longer-hide-bootloader-unlock-status/)

My bad. Didn’t read the thread carefully enough before posting. Just annoyed. I take the point that other phones have experienced these problems also but it is not flagship phones. It looks to be the less profitable ones. Samsung is so well known for failing to keep up with software updates they have successfully been sued by governments for it. It is always the low end handsets, not the flagships. Fairphone only has three phones to manage and this is its flagship device suffering this problem. I don’t think there is any excuse here. This should not be happening to a relatively new flagship device and it looks bad for the brand going forward. They really need to get this sorted for their reputation.
Thanks for the download link. I got the app installed but it still is not supported. 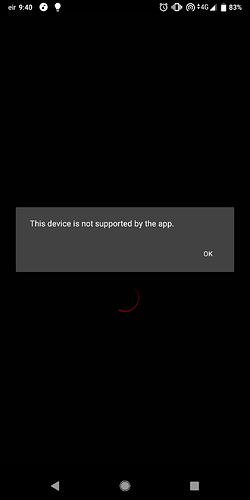 Do you have verification that Google messed up? Or did FP simply just ignore upcoming changes?

I wouldn’t say Google messed up. They changed safetynet to include information from the bootloader, which might be differently implemented with fp. In fact, if i understood the discussion in the development threads correctly, the cryptographic security mechanisms on the fp might not be implemented correctly. Like for other phones also, where this happened. Also, even with no updates available, I’m not surprised Samsung still works, as with knox and these mechanisms those phones are really locked down…

They changed safetynet to include information from the bootloader, which might be differently implemented with fp. In fact, if i understood the discussion in the development threads correctly, the cryptographic security mechanisms on the fp might not be implemented correctly.

So if I understand you correctly, it is rather FP who messed up a bit? And now it is harder to fix than first imagined?

To add slightly to the speculation: My understanding is that for the FP3 more of the software development is done by Arima. This has led to delays in the publishing of source code of software on the FP3 (and GPL compliance) in the past, and it may be a reason things are taking longer now (seems Arima isn’t as on the ball as desirable). I realise none of this matters from an end-user point of view (i.e. it should just work), but I sometimes find it fascinating to see what potentially happens behind the scenes.

If there is a problem with the bootloader, I’m not sure whether this is Fairphone, Arima, or both that need to work on it. In any case, the problem will have existed from the onset, but only became an issue when CTS changed. This means it isn’t a case of reverting to the last known working state, because there isn’t one. Changing/redesigning the bootloader can have consequences for the way updates work and for whether people can choose to install their own OS. Pushing an update that breaks the ability to perform subsequent updates would be a disaster, so they’ll want to triple check that this still works. Locking down the device in such a way that Google has more control over your phone than you and Fairphone have doesn’t fit well with the company ethos, so they’ll be trying to avoid ending up in that situation too.

Finally, FP is a small company with a small development team. This means that disruption by, for example, a pandemic, can make it difficult to keep things on track as there is little redundancy in smaller teams. Past experience seems to have taught them that overall not providing dates leads to fewer problems than providing an estimate and then going over estimate.

I would really hope that they take this as an opportunity to provide an Open Source alternative to Google Stock Android; however, due to current disruption in business affairs around the globe, I think it will not happen anytime soon.

Ty for your explanation. I didn’t know that the software part was outsourced. It explains it well though.

(Even though I am of the firm conviction that outsourcing such a core part of your business as firmware when you are a device manufacturer can only have long standing dire consequences as their long term interests deviate from yours, never outsource core competencies in changing environments (I.e. tech in general) even if there is a short term profit to be made)

Of course it would be desirable, if Fairphone would have a full-fledged development team for software matters. However, that is probably highly unrealistic at this point. For me, right now, it would be sufficient that FP would be “critical mass” enough for Arima to make the fix/change quickly.
@Johannes, is the supplier Arima Comm, based in Taiwan?

I’m not sure how much is outsourced, and how unavoidable this is. As I cannot find the statement linking Arima to code releases, I may be mistaken about it being them.

However, they do produce the device, which in the phone industry often means that they are the ones who have access to the source code for proprietary drivers and the code that links them into the android system. They’re not allowed to share with their customers as part of agreements with the system-on-chip manufacturer. As there are only few mobile SoC companies, smaller companies are effectively dependent on companies such as Arima for the driver/kernel support. (See also discussions about the MTK sources in FP1). Not sure where the bootloader lies in all of this (as in, whether the issue indeed lies there, which one specifically, and who ‘owns’ it). If you want an interesting technical background read, see here.

Also, there really seems to be some very hefty work behind the scenes, as there’s no February and no March security update… (To my knowledge)

Isn’t a Chinese company delivering the firmware? If yes, might be earlier affected by the COVID-19 crisis.

Anyone brave enough to try this update?

Edit: Update complete. I can confirm when I went into Google Pay it still said it still had the warning, but tapped the “check software” button and it pops up to say everything is ready to use. Perfect!! Can’t test right now, but will be using next time I get out (whenever that may be from corona lockdown!!)

Thanks for that quick check. Hopefully, everything else is also working and stable?
I really appreciate that Fairphone delivered the fix quickly, but I could very well be that testing time was squeezed because customers like me are so impatient