What is your experience with the privacy-friendly Custom-ROM iodéOS on the FP3(+)? How does iodé perform in everyday life? Which things would you describe as positive and which as negative?

I’ve been using iodé on my FP3 for a few months now. So far I have not identified any problems.
I like it very much because it has the iodé blocker, it lets you choose which of the built-in apps you want and which you don’t want.

Three drawbacks I have identified for myself so far:

On the whole, I would say: I have found the best Android for me. But there may be other views.

I wish i could use it. But not available yet for FP4
like all the others

the iodé blocker is not open source and (because it is sort of what iodé is all about) of course not uninstallable.

Right, just now, the only small catch, but their unique selling proposition
I think but you can trust that privacy is not only promised but also delivered

the security updates are not rolled out every month, unlike LineageOS. Of course, the period I observed may not be representative.

the community is obviously smaller than /e/, which means that there is hardly any activity in the forum.

the iodé blocker is not open source

I see that like you and @AlphaElwedritsch. For me, that is also the last (small) catch with iodé. Otherwise they have come very far with the development. I hope they release the source code next year. After all, they announced it in the test of tarnkappe.info (english/german):

Antoine Maurino assured me that at least the integrated ad/malware and data leak blocker from iodé will normally be open source by next year. So the motto is wait and see.

the security updates are not rolled out every month

I’ve seen this already, too. I just found this one about that:

As you may know, iodé’s income comes from the sale of smartphones. But as it is not financially viable yet, our dev team doesn’t work full time on the project. Thus we can’t guarantee a planning with monthly releases just yet. Take April for instance, we had unexpected personal events that led us to postpone our coming beta update by one week or so…
I agree monthly security patch level are important, & hope we are able to provide a better sight on updates soon, that will depend on how quickly things move.

the community is obviously smaller than /e/, which means that there is hardly any activity in the forum.

Agree, really looks like little activity! I think that’s surely primarily because hardly anyone knows about iodéOS at the moment. (Maybe also a little bit because the concept of iodé is not as popular???). I think it’s a pity that iodé is so unknown at the moment. I think it deserves much more attention. I have the impression that they try extremely hard and successfully to implement as much data protection as possible and to keep the whole system lean and stable. You have complete freedom to choose what you want to uninstall from the pre-installed apps. Except of course the blocker. But for that you can even uninstall microG if needed. Where else do you have so much freedom?

Does iodé blocker have the same functionality as Netguard? Or is it missing something important in your opinion?

Have you heard of iodéOS? The Industry 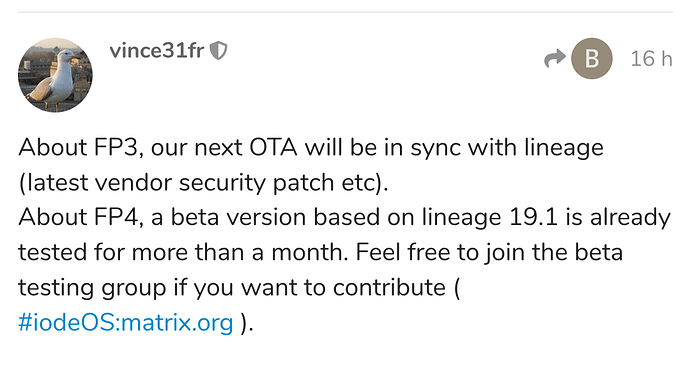 And for the sake of completeness: I encountered the issue that VoWifi does not work (although setting available and enabled) however that seem to be a broader issue arising probably from LOS and also effecting FP4 as well as other devices.

probably from LOS and also effecting FP4 as well as other devices.

That’s what I think, too