FP3 does not start charging when I plug it with charger

Hi,
I try to explain the prob, that is not very clear,
when my phone power off because of battery down, I attach the charger cable and aspect that my FP3 show the images that appears when I attach it with battery cable.
But nothing appens…
I need to detach it
open the rear protection
remove and reinstall battery

then, when I attach the cable again… it start to show the screen images and start to charge.

when my phone power off because of battery down

Does this mean that you let the battery run all dry until the percentage was 0 %? That’s something not recommended to do because it can reduce the total battery life expectancy. And it might result in such “behaviour” as the one you are describing.

Does this mean that you let the battery run all dry until the percentage was 0 %?

not always (I have two battery) but sometimes it could happen (like yesterday)
what can you sudgest me when do I have to change my battery? 5%? 10%

Honestly, charge or change the battery when it’s down to 20 or better: 25%. Might be inconvenient for you, but it’s what is generally recommended.

You can check the voltage on the battery via dialling *#*#66#*#*
then Service tests > Test Single > Battery status check.

The percentage may not be calibrated accurately but have a look at the voltage reading at say 30% 20% 10% etc to help understand.

Also the application that reads the battery charge is calibrated to the battery, and there is a learned charging routine for each battery: ~ swapping batteries will add issues.

when I dial the string ##66## the screen goes white fo 3 second and the reappear the data that were displayed befon.
I mean: no menu.
because this appen?
what can I do?

you should get as in the image below 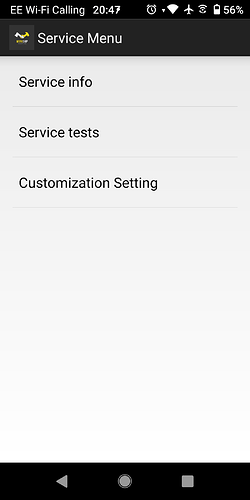 There is another way of getting the menu, if you have Developer Options enabled

On the Fairphone 3 there are Service tests available via Settings - System - Advanced - Developer options (how to enable them in Android is all over the internet) - Service Menu - Service tests.

However if you have entered the correct dialling CODE then there is some concern.

Which OS are you using ??

On a QWERTY keyboard perhaps, but keyboard layouts differ internationally, and does that even help in the dialer?

I use e/s.o
I digit ##66##
but the menu does not start
I’m not in developer option. I remember I have deactivated it after installing e/

Why with code does not start menu?

/e/ doesn’t have the test menu. Only Fairphone OS has it.

ok, so I think I’ve to recharge battery when it has 20% of charge.
Is it correct?

As @urs_lesse already said, it’s better for the battery and generally recommended.

It’s not exact science. Try to not let it run below 20%, but the phone/battery will not spontaneously combust if you do occasionally.
0% is really bad, as you found out already, don’t let it run to 0%.