Welcome to the Fairphone community.
Please contact support. Your phone is on warranty and has a severe problem. It’s not a common problem, but of course you only read in the Internet about people complaining, not about the thousands and thousands that have no issues.

Sounds like a poorly connected screen.
Either as Incanus suggested use the warranty or

worked fine for me, thank you!

Almost 2 years since first post of this topic, but issue is still relevant → it just happens with my Fairphone 3, screen was freezing since yesterday (a cold day, 0°C, phone in my pocket).

Be careful going from a warm and hence relatively humid atmosphere to the cold where humidity will condense.

You can dismantle the phone and see how bad the dampness gets, if you see red squares it is not a good sign.

However, unseen to simple a dismantle within the warranty, dampness can get into the modules

Thank you for your post, removing the screen module and cleaning the contacts reanimated my noised FP3+ as well. Still – that’s an unsatisfying incident.

So I gather you had a noisy screen. Do you think it was dirty contacts or maybe just pressure.

Did you notice a white or red square

Rain water inside - what could be wrong? Fairphone 3

Hi and welcome. Further to what @OldRoutard has said it can take days to dry well in a flow of air and ensure you dismantle the phone to get air around the modules and help dry the contacts. For the dampness indicators you will have to dismantle the phone to the point where you remove the screen and then see this post and two above it. hopefully you don’t see a red square. The top left in the top image is the red square in the bottom one. [image]

Hi @amoun,
I am actually not sure about the pressure, but all squares are white, with no shade of red whatsoever. All the screws appeared to me to have a tight fit, though, so I suppose it were some dirt particles. I keep the phone in my jeans’ pocket quite often, so that could have possibly been a source for small fluff or dust, but as a matter of fact, I did not see any - but I also did not pay enough attention, to be honest, to rule that out beyond any doubt.
Kind regards,
Markus

I keep the phone in my jeans’ pocket quite often, so that could have possibly been a source for small fluff or dust,

I work outside mostly, often wearing overalls etc. I have a case which helps keep a lot of grime off and I slide a piece of plastic between the case and the usb port as that can easily collect dust and debris.

Come on, as the green and black are the same fabrication it’s definitely only 80€ for two bits of recycled plastic. There’s a job waiting there. I bought the green and it’s fine. I wanted to help out Fairphone and wanted a way to hold a thin film of plastic in front of the usbC port. But 4€ would seem more appropriate, how they get away with I don’t know, must be some right mugs buying old rubbish. [image]

Worked for me, too! I got thee noise-screen after dropping the Phone. After loosing and tighten those screws it works normal again.

Hello all. Today I suffered from the same issue. In the end what solved it was to apply a slight twisting motion while holding the phone in landscape as @Audouin_Leo mentioned in his 1st post on this topic.

Just for your information, these are the steps that Customer Support told me to follow (they did not work for me but might work for you):

Hi,
had the same problem today; first the screen was totally dark, then, after I disassembled the phone and put it back together it was “noisy”.
Twisting and pressing did not help but cleaning the contacts with rubbing alcohol and pressing the pin-contacts did resolve the problem.
Thanks to @corvuscorax for mentioning this!

That was helpfull, thank you.
All the other tips didn’t help; twisting dis and reassemble didn’t do the tric. But cleaning worked immediatly.

Also had this problem twice now, first time it resolved by itself after a couple of restarts. Today I had to reassemble and clean to make it work again. Hope it works out for the next user to stop by here.

Hello all. I had this issue once again (see my first reply from Dec’21). This time the twisting was not enough and I had to apply the alcohol cleaning as @corvuscorax described.

The cleaning did not work on the first try since I introduced more issues. The following happened after my first cleaning attempt: still original colored noise issue (temporarily fixed for a few seconds with twisting) and then the screen would be frozen, totally black, showing pixel fingerprints, not detecting touch or just showing a broken picture. After some patience and a second attempt, it worked, but only after I had screwed back all the screws to maintain the structure of the phone.

So my advice is to try to disassemble and re-assemble the screen and take the opportunity to clean the screen connection contacts with alcohol. Although, keep in mind to confirm if it’s solved only after it is completely assembled again. Small tip, taking out the screen was no where near as easy as shown on Replace the display of your Fairphone 3 | How to | Fairphone - YouTube (sec 1:08) but with patience you can click away one place at a time.

Yesterday, my Fairphone 3 with /e/ OS installed on it fell down and showed the same colourful noise image. I was unable to fix this by taking out the battery, which is why I followed the advice of multiple people here to take the screen out and clean the golden contact pins with alcohol.

After putting the screen back in, it worked fine again!

Unlike most other phones on the market, Fairphones are meant to be disassembled easily. As this, contacts between components are “less solid” than in more integrated phones - where components are hard soldered together or using tight connectors.

In FP3 the motherboard is connected to the screen through a number of metal pads unto which springs press the counter-contacts. This, by design, is a setup that is vulnerable to having occasionally bad connections.

Over time the contacts will form a thin residue layer from dust that got into the device, moisture (not actual water but just the moisture that is normally in the air) and oxides that formed on the metal or on metal-metal interface. Some of this might already be there from manufacturing.

If then anything disturbs the contacts - for example the phone falling down, but just vibrations (getting a call), changes in temperature, or just normal handling, the contacts shift ever so slightly - from the spot where they had always been to a section of the pad that doesn’t conduct as well anymore.

I don’t know how long the fix will last but I’m just happy that it works for now and that this happened on a Fairphone, since any other phone could most likely not have been repaired (at least that easily).

Had the same issue today. Yesterday the phone got a bit humid in a rainy day and got dropped a few times. The result was an unusable phone with noisy screen.

This fixed the problem for me: Take the screen out. Clean the golden contact pins with alcohol. Reassemble. 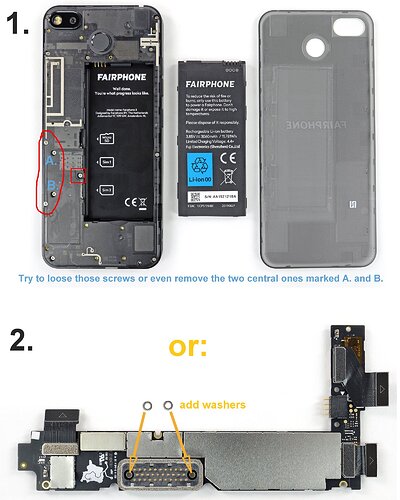 I strongly tightened the screws

Hi and welcome to the forum and thanks for your insight.

However it is not recommended to ‘strongly’ tighten screws especially as it can distort the modules as it seems you have discovered, but it increases the chance of stripping both the head engagement and the thread and even if it doesn’t do that it may make it difficult to remove the screws without damaging the heads.

Just repaired/cleaned my Fairphone 3. Screen didn’t reacted anymore. Suddenly when I was typing. Shutting and restarting … nothing worked.

So I took the phe apart, with help of some video’s cleaned carefully with cotton swabs and pure alcohol.

I am proud of Fairphone and myself … it worked!