I was wondering what was the best backup strategy for my FP3 device on my computer ?
I’m on a Macbook Pro still using macOS 10.9.5

I have it since december and never backuped it so I begin to stress a bit of losing stuff and since I’m quite interested by /e/OS I certainly need to find a solution.

is there anybody that can help me this topic please ?

Maybe there is already a topic on that but didn’t find it yet.

Properly backing up Android phones is still a mess nowadays. Perhaps, you can go the “Upload everything to the Google Cloud” way, but I have no experience on it and it is bad from a privacy perspective. Besides, you will not be able to restore your backup on /e/. My thoughts:

Perhaps, you can go the “Upload everything to the Google Cloud” way, but I have no experience on it and it is bad from a privacy perspective.

And there’s no restoring that on /e/, or did I miss something?

… with an unlocked bootloader.
If the bootloader isn’t already unlocked, unlocking it forces a factory reset, deleting Apps and user data.

I’m on a Macbook Pro

There’s another problem right there

.
Just judging by this forum … apart from Macs being the least wide-spread computer option here a Mac is the least convenient option when dealing with an Android phone (Do I sense some kind of intent there from Apple?) …

You wouldn’t alternatively have access to a Windows computer by chance?

Ok, to be a bit more constructive:

Many apps have their own backup mechanisms (e.g. “export settings” or cloud backup).

This is correct, and a total pain.
You will not get around checking this possibility, so you can already start to go through your important Apps and see what you can export, and whether those Apps offer to import the exported data later.

Internal storage can be backed up by dragging the files to your computer.

Normally that would be the case, but that’s where I read here in the forum that the Mac is inconvenient.
You would need to have a look at “Android File Transfer” (Macs seem to have this) or alternatively OpenMTP.
(On Windows, Explorer would do, or you could transfer Internal Storage with MyPhoneExplorer.)

For dealing with SMS messages, there are SMS Backup & Restore Apps, which tend to work.
(On Windows, you could transfer them locally with MyPhoneExplorer.)

The Contacts App should have an export function somewhere which should be able to save your contacts into a VCF file you could then import later.
(On Windows, you could transfer them locally with MyPhoneExplorer.)

If you bought Apps in the Play Store and want to try to use them on /e/ (there’s no guarantee they’ll work), make sure the “paid” status isn’t managed by the Play Store alone. You should have an extra App APK to install, or a code, or something else which could be applied without the Play Store.

Transferring Apps in general means just installing them again one by one.
You can export their APKs and install those again without using a store, if you like that better … but one by one. Installing the Apps would be faster this way, but exporting the APKs takes time, so there’s no net gain, I would say.
(There are a lot of APK extractors on offer, including, you guessed it, MyPhoneExplorer on Windows … but nowadays there are “split” APKs around, which need something extra like SAI.)

Thanks a lot, both of you.

Damned this is a bit annoying and worrying. I come from an iphone and it was so simple.

I wont go back cause I’m quite happy with my FP3, but still I would like if somebody would do a nice program that could do that easily.

Google cloud is certainly not an option for me.

I have access to a Windows computer but I never connect it to the web cause I have it only for one professional program and I do not want to mess with that.

So if I read your message right MyPhoneExplorer is the good tool to do full backup on windows ? Am I right ?

So if I read your message right MyPhoneExplorer is the good tool to do full backup on windows ? Am I right ?

Let’s say it takes care of a lot of otherwise worrisome stuff in a convenient way. I only mentioned it often to hint towards why I asked about a Windows computer, because it runs on Windows only, sadly (and perhaps on Linux via Wine, but connection types are limited then).
It doesn’t do full backups … it can’t because Android doesn’t allow the necessary level of access for that remotely.

I wont go back cause I’m quite happy with my FP3, but still I would like if somebody would do a nice program that could do that easily.

There’s always something in the works, which isn’t quite there now.
But if you are going to install /e/, you’ll have to unlock the bootloader anyway … and there you will have turned the key to the possibility to get much closer to full, convenient backups, just don’t lock the bootloader again … have a look here …

As the second /e/ build for the Fairphone 3 is out, I took the opportunity to check whether my theoretical backup and restore procedure with an unlocked bootloader works with /e/ in practice, too. (It did work with the stock Fairphone OS, but better...

Thanks a lot for your time, I’ll check that.

I can recommend to use Nextcloud to upload your photos and videos to a Nextcloud server you own/trust (and, optionally, remove it from your smartphone).

Since /e/ offers their own Nextcloud services (https://ecloud.global), you should be able to get an account there, upload data from any phone via the Nextcloud app (1GB free, premium plans for more GB). You could then synchronize this data automatically to your phone on /e/.

On another note, this might be relevant for Mac users too:

You can run a virtual machine from Windows with any Debian-based distribution installed just for this purpose. The process is very straight forward and knowing how to run a virtual machine may very well be worth your time, since there are many uses for it. Another alternative is to create a bootable USB stick so that you can run Linux without install it.

Many Android apps have their own import/export options for backing up chat history, subscriptions, downloaded maps, bookmarks, etc… This means more files to keep track of but at the same time makes it really easy to handle the backup on a per app basis, and it works really well.

To transfer files from my phone to my computer I use Syncthing. You install it both in your computer and in your phone and setup a folder that will be kept synchronized. It’s cross-platform so it should work on Mac too.

Instead of synchronizing files you can set folders in send-only or receive-only mode to have better control of the flow. This is how I do my backups, I have a folder set to receive only files from my phone and another one to send them to the phone. 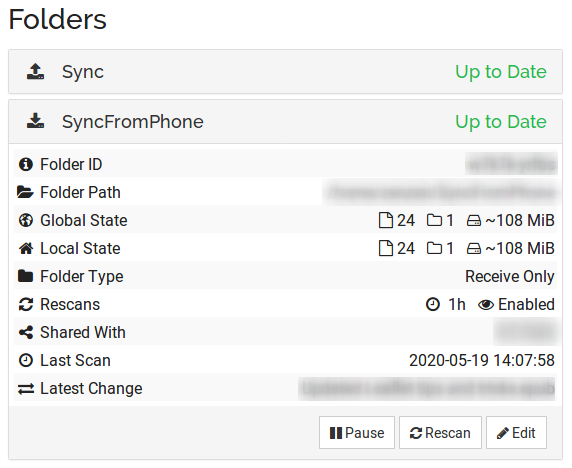 This has the added benefit that I can actually send files from my computer to my phone easily, really useful for files that I need on my phone e.g., movies, music, boarding passes, signed documents, etc.

2 posts were split to a new topic: Is it insecure to have an unlocked bootloader?

That looks good. Thanks, I am now looking for a useful regular backup possibility. I used to have an FP1 for years. There I started an ssh server on a rootshell and mirrored the whole storage with rsync once a week. Later i used seafile.

I had an iPhone until recently and I am very spoiled by iTunes. So a wonderful offline backup is possible.

Thanks again to all for your help I’ll check all these solutions but I don’t like the cloud options, i prefer to use my own storage.

I will have to track back from my general conviction to run an unlocked bootloader, there’s a legitimate concern about temporary access to the phone with malicious intent …

Is it insecure to have an unlocked bootloader?

An unlocked bootloader allows anyone who has temporary access to the phone to tamper with the boot process and in consequence with the system partition. This enables a slightly sophisticated attacker to implant a backdoor or extract the decryption key/your passphrase while you unlock the phone the next time.

… while I’m still pretty certain the data would be safe if the phone simply got lost or stolen, but we’ll have to see, it seems I didn’t drill down on this enough. Sorry.