Nope, it was more then 3.5 years old, when the FP3 finally came to the rescue

I confirm I can use it for 2 full days as well. from 7 AM of day one to 24 of day two. I keep it switched on during the night. More than satisfied from the battery performance

I am super happy with the battery life. It seems to consume hardly any power when the screen is off. Also, the brightness is set to automatic and seems pretty bright most oft the time. Within the last 7 days, I charged it “a bit” during the day, and that was enough. Minimum percentage was 55 or so. I usually don’t switch a smartphone off completely.

Hi, I will received my FP3 tomorrow, and I’d like to know how to manage the battery for the 1/2 first times?
Should I use it until it’s empty? Should I charge it during 6/8 hours?

Thanks for your advices!

With lithium-ion batteries there is no reason to fully discharge the battery. In fact, it’s not good for the battery to let it completely discharge. For the most optimal battery life in the long term, you want to keep your charge between 40-80%, though I’m not sure how much of a difference does it make.

Almost 3 years later, what are your experiences? Have you replaced your battery?

I have my FP3 since the beginning of 2020, so for over 2.5 years. Lately I start noticing that the battery does not hold the charge for as long as before anymore.

Especially when travelling and using navigation I could not get through the whole day. If mostly ideling, I can manage two days.

Did you check with an app like AkkuBattery if it seems to be more related to a degrading battery or if it’s probably caused by increased app CPU usage?

After 2 to 3 years the OS and apps have been updated and it’s likely that they are more CPU hungry and that’s without you adding extra apps over that time.

Still the battery may well have also lost ##% of it’s capacity. It will be difficult to tell unless you can compare to another battery.

Good hint, I’ll monitor with AccuBattery (this one: https://play.google.com/store/apps/details?id=com.digibites.accubattery, unfortunately not on F-Droid).

Using it for some time it can even give you an estimate of the remaining battery capacity. Maybe this helps…

Pretty much the day after the latest OS upgrade my battery seemed start to lose it. I was walking home and my battery was at around 60% and then a few minutes later it turned off and wouldn’t restart. It’s happened a few times now, where it jumps straight to zero after reporting a much higher rating. The drain also seems a lot quicker, i.e. it can be in my bag in battery saving mode doing nothing for a few hours but will have lost 30%. When I first got it, that wouldn’t have been much battery at all.

So after charging almost 1000%, I have an estimated capacity of 87%. Not bad for an almost 3-years-old battery. 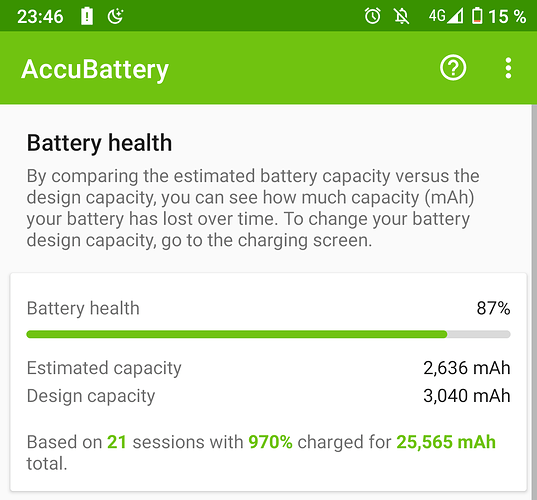 However, the discharge while having the screen on seems quite high. Additionally there are about 10% discharge that I cannot trace to a specific foreground app. May be the system, or a background app… Is there an app to monitor background processes without root access? 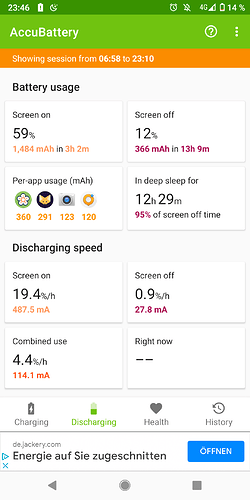 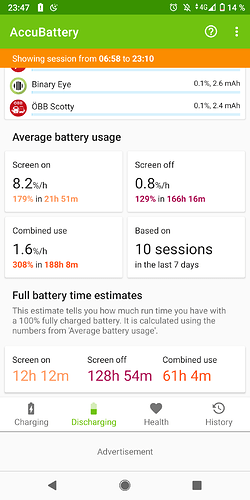 Did you calibrate the battery before questioning via the app?

And in general the overridding issue is how much you use the phone in terms of longevity.

So whereas that figure may be useful to you it may be misleading for others with different usage. Some people charge thier phone daily or more, me every few days from about 30% to 90%.

I’ll have a look at that Accubattery app though

Thanks for the insight.

Additionally there are about 10% discharge that I cannot trace to a specific foreground app.

Maybe it’s just the power needed for the screen?!

I think you may be right about the screen draining the battery more than it should. I’ve mostly ruled out my battery as I bought it in March this year (the old battery developed a beer belly!) Since update 8901.4.A.0016.6, the adaptive brightness had developed a sense of humour. I put up with it until last week thinking it may eventually “adapt”, but it didn’t and I got fed up of it alternating from retina burning bright to being barely able to see it while the ambient light had not changed. So last week I switched adaptive brightness off.

This is not scientific, but before the update I’d end the day on around 65% from fully charged, after the update 38%. After turning off the adaptive brightness, I’m ending up nearer 55%. Only problem is if I forget to turn the brightness up before I go into the daylight, I can’t see to turn it up