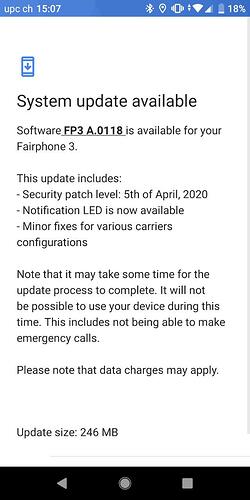 Heeeey, another security relevant update I am not receiving.

I wonder if the “minor fixes for various carriers configurations” will improve on the no-update-for-vodafone-orange issue (once affected people were actually able to get this update).

Edit: I can confirm that the notification LED works now.
Ask me in a couple of days if I find this a good thing or not

Actually I didn’t miss them…

We hopefully are able to decide to switch it off, I guess.

So no headphone jack bug fix

Immediately into the Android9 though, I am sometimes using apps like OpenSignal and others to monitor and record e.g. Mobile Network coverage and operators and similar stuff.

OpenSignal is a fully-featured mobile connectivity and network signal speed test tool. Speed test, including download, upload and latency - for 3G, 4G/LTE, 5G and WiFi Find the best network provider in your area. Compare coverage on Sprint, T-Mobile, AT&T, Verizon and more. Video streaming test - check streaming experience for Netflix, YouTube and others Compare what you’re paying for to what you’re actually getting by measuring connection quality on a Google map with a database of signal an...

These apps seemingly immediately crash when activating the Location function of Android9 and the apps then trying to make use of it, draw on their respective maps and functions like that.

does not seem to have problems making use of locations services and draw its map and visualise stuff.

Anyone else having location based issues?

It promts the questions why Fairphone didn’t communicate that they work on it, as so many requested the implementation (or did I miss it?)

Me. My phone is update to date with Patch Level December 5th.

OK. The Update is done, but were is the LED configuration in the menu???

(Seriously, if you would go as far as not labelling it with something people would find via searching the Settings for “LED”, then I would have labelled it “Blinkenlights”, but that’s just me

Thank you, but it seems I cannot install it via SD card in recovery mode.
(“E:Error in /sideload/package.zip (Status 1)”, then “Installation aborted”.)

I know the notification light has religious followings both for and against, but to all those who think notification lights belong dead: thank you for taking a few seconds to disable it so the rest of us who do want it can enjoy it.

I don’t care about notifications but I bought an FP because it is supposed to last me several years but I am still on the update from December. I am using Dutch Vodafone. What do you recommend? Should I contact Vodafone or Fairphone about this issue? It’s really starting to grind my gears! I live alone and don’t have access to anyone’s SIM from another provider right now, but have any Dutchies been successful updating with another SIM and if so, how did you do it?

What do you recommend?

If you trust @Amber then you should just be a little bit patient (see here, here or here - sorry the latter two posts are in German only).

Thanks, I really hope it is true. In the meantime I am still interested in hearing from people who successfully updated using another SIM with specific details on how they did it (which provider, which slot, etc.)

I’ve just turned on an FP3 here without a SIM card, and if I go to System > System update, it shows the available update. I know you’ve tried that before but it really ought to work - but if it doesn’t, I think contacting Vodafone may be the way to go.